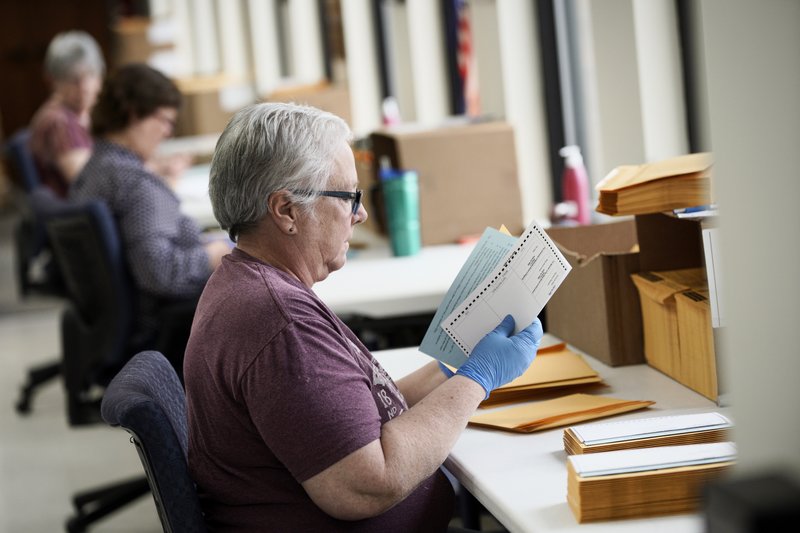 In this April 14, 2020 photo, Pam Fleming and fellow workers stuff ballots and instructions into mail-in envelopes at the Lancaster County Election Committee offices in Lincoln, Neb. Officials in Nebraska are forging ahead with plans for the state&#x2019;s May 12 primary despite calls from Democrats to only offer voting by mail and concerns from public health officials that in-person voting will help the coronavirus spread. (AP Photo/Nati Harnik)

Republican President Donald Trump and presumptive Democratic challenger Joe Biden sailed to easy victories in the election, the first in-person primary since a heavily criticized election in Wisconsin five weeks ago in the middle of the coronavirus pandemic. So did Republican U.S. Sen. Ben Sasse, who faced a GOP primary challenge because of his previous criticism of Trump.

Officials had encouraged people to vote by mail, though Republican Gov. Pete Ricketts and Secretary of State Bob Evnen both pledged to forge ahead with an in-person primary even though many other states have rescheduled theirs or switched to all-mail voting.

Polling sites in the Omaha suburb of Papillion reported lower in-person turnout than normal Tuesday morning. At First Lutheran Church, voters who walked into the basement polling station had plenty of space to cast their ballots.

[Video not showing up above? Click here to watch » https://www.youtube.com/watch?v=yh80pY1rtNk]

Michael Rabe, 68, of Papillion, said he wanted to vote in person because he doesn't trust mail-in voting but believes he had a civic duty to cast a ballot. Rabe wore a mask into the polling site, only to realize he was the only voter there at the time. The self-described "hardcore Republican" said he was most interested in voting for Matt Innis, a long-shot primary challenger to Sasse.

"I didn't like that when President Trump got into office, Sasse opposed him," Rabe said after voting. "I was not a Trump supporter when he was running, but now that he's our president, I am."

Douglas County Election Commissioner Brian Kruse, who oversees polling sites in Omaha, said in-person turnout was unusually low. He said he still expected strong turnout overall because of the huge number of mail-in ballots received, but "there's just nobody out there today" and the election has gone smoothly.

Ricketts ordered members of the Nebraska National Guard to provide on-call help at short-staffed polling sites in eight counties, including the Omaha and Lincoln areas. He said Guard members wore civilian clothes, not their normal uniforms.