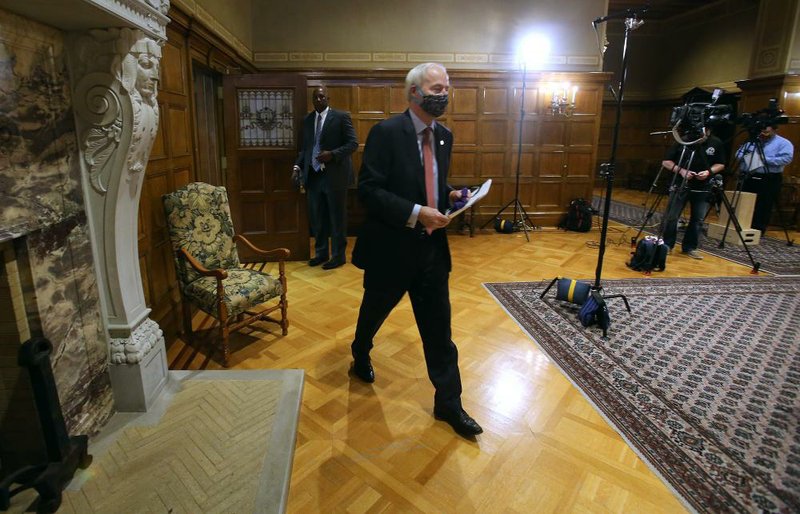 Gov. Asa Hutchinson enters the conference room for the daily briefing for covid-19 on Wednesday, May 6, 2020, at the state Capitol in Little Rock. (Arkansas Democrat-Gazette/Thomas Metthe)

The state is ordering a Fort Smith music venue not to have a concert Friday night as scheduled.

TempleLive is planning a concert by Travis McCready, the frontman of Bishop Gunn, a blues-rock band from Natchez, Miss.

But the concert date is three days before Arkansas officially reopens large indoor venues since closing them in mid-March because of the coronavirus pandemic.

"In terms of the concert, there will be a cease-and-desist order that will be issued by the Department of Health directing that that concert not take place, which is an official legal order and directive that will go out," Gov. Asa Hutchinson said Tuesday during his briefing.

Meg Mirivel, a spokeswoman for the state Department of Health, said the order would probably be served Tuesday evening or today.

Howard Brill, a professor of law at the University of Arkansas, Fayetteville, said the state has the authority to issue such an order to protect people during an emergency. He cited the Arkansas Emergency Services Act of 1973 and the governor's Executive Order 20-03 declaring an emergency because of the coronavirus.

"In my opinion, such an order is justified under the law," said Brill. "I would advise the promoters to comply."

Brill said authorities could properly take steps to prevent the event from taking place on Friday.

On March 26, Dr. Nate Smith, Arkansas' secretary of health, issued an order restricting gatherings to 10 people, but it exempted houses of worship.

Although in-person church services weren't banned in Arkansas during the pandemic, on May 4, the state issued "guidance" for churches, saying parishioners should stay 6 feet from other family groups, wear masks and follow several other guidelines, but having church online would be even better.

Also on May 4, Hutchinson issued an order saying large venues could reopen in two weeks with a maximum audience size of 50 people.

On May 5, Billboard magazine had a story about the McCready concert at TempleLive, calling it one of the first in the U.S. since the pandemic began two months ago.

The article quoted TempleLive's Mike Brown saying, "If you are a church, there are no restrictions on how many people you can have inside as long as they follow CDC guidelines and stay six feet apart. So our position is, a public gathering is a public gathering regardless of the reason, whether you are going to go to a quilting event, a church or a concert. Tell me the difference, because in our opinion it is discriminatory."

Whitfield Hyman, a Fort Smith lawyer, said that argument may be a stretch.

"Generally speaking, for a business to claim discrimination based on unequal treatment would require more proof than a government's more favorable treatment of religious institutions," he said in an email. "The business would need to show at least that it is being singled out as a class of one before it could state a claim for denial of equal protection, and it might also need to show that the singling out is motivated out of ill will. If other concert venues are subject to the same restrictions, the government's treatment of religious gatherings would be irrelevant in my opinion. The legal right of businesses to free speech in case law has been more restricted than that of individuals or religions."

The push and pull between Hutchinson and TempleLive got more national media attention -- from The New York Times and Rolling Stone magazine -- in addition to an article in the Arkansas Democrat-Gazette on Friday.

The headline on the Rolling Stone article read: "How One Arkansas Venue Hopes to Stage America's First Pandemic Concert."

The Times headline read: "Concert to Test Whether America Is Ready to Rock Again."

"The performance, though modest, is attracting outsized attention, not only because it's testing whether people are ready to return in numbers to listen to live music but also because it is challenging the restrictions the governor put on such performances," wrote Graham Bowley in the Times on Sunday.

According to TempleLive's website, several precautions were being taken for the "intimate solo acoustic performance" of McCready, including reducing capacity in the theater by 80%, from 1,100 to 229.

"Fog sprayers" would be deployed for sanitation purposes and masks would be available for sale, according to the website. Attendees will have their temperatures checked upon arrival.

According to Ticketmaster's website, only 50 seats remained available late Tuesday. Tickets are $20 each.

On Monday, Hutchinson again expressed his concern about the planned concert, saying at his briefing that it "violates our directives." He said TempleLive had submitted a plan to reopen, which is required if it wants to have a crowd of more than 50 people but still fewer than 33% capacity, allowed under an amended order Monday.

"We have looked at their plan and their plan was insufficient as well," Hutchinson said Monday. "That concert does not have our approval being three days before the authorized date as well as a few other problems."

Lance Beaty, president of Beaty Capital Group Inc., the parent company of TempleLive, responded with a news release late Monday saying he planned to proceed with the concert. He said the venue would have a "fan-pod" seating scheme with groups spaced at least 6 feet apart.

"Our counsel continues to be engaged in discussions with the state, even late this evening, and we hope that science and reason will produce a plan going forward that is satisfactory to all," said Beaty. "We appreciate that the situations faced by the governor and his staff are serious and complex, and much of Arkansas's covid-19 approach has been praiseworthy. However, in these complex matters, general policies and directives are not always best as 'one size fits all.' Therefore, as the needs of the 50 states are not identical, the conditions across the State of Arkansas are not either."

Representatives at TempleLive couldn't be reached Tuesday for comment.

In his daily briefing Tuesday, Hutchinson explained his stance on TempleLive.

"Clearly it is three days before we determined it was an appropriate time to open up to a limited capacity some of those indoor venues," he said. "And even if you're going to have 250 people at a venue, you still had to have a specific plan that would be approved by the Department of Health. None of that was done in this case. It's out of time.

"Can you imagine what reaction we would have had across Arkansas if we set the date for May 11 to open up restaurants but a bunch of 'em just decided to do that on May 5? You can't just arbitrarily determine when the restrictions are lifted. That is something that is done based on a public-health requirement."