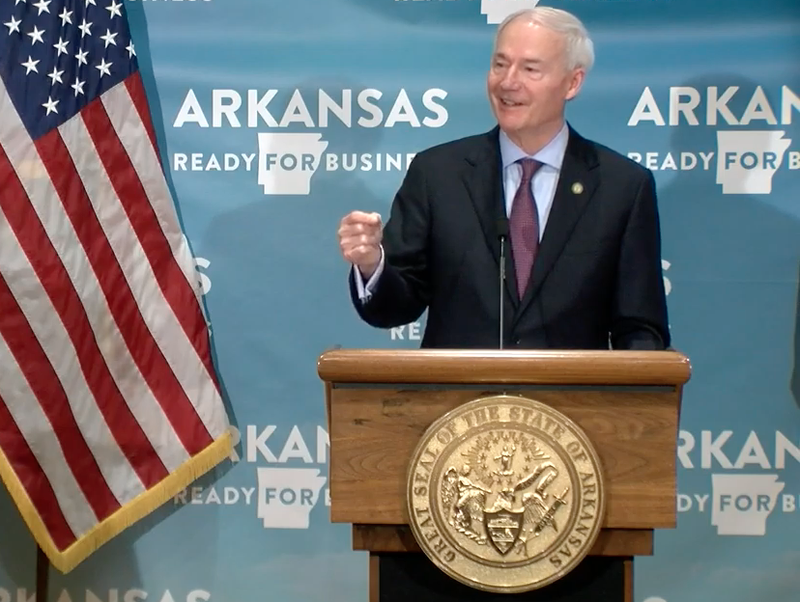 Arkansas Gov. Asa Hutchinson speaks in Little Rock on Wednesday in this screen grab of video provided by the governor's office.

Inmates at a third prison in Arkansas have tested positive for covid-19, Department of Health Secretary Dr. Nate Smith said Wednesday at Gov. Asa Hutchinson’s daily press briefing during which he also announced two more Arkansans have died of the virus.

The total number of cases of coronavirus in Arkansas rose to 4,236, including 862 active cases in which the patient remains ill as opposed to recovered or deceased. The death toll is 97.

Department of Corrections spokesman Solomon Graves said 45 inmates at the Randall L. Williams Unit in Pine Bluff have tested positive for the virus, and three more are being treated as likely positives.

The announcement comes as prison officials continue their attempts to manage an outbreak at the Cummins Unit, which has grown to infect more than 900 inmates in recent weeks.

The Randall L. Williams Unit is a smaller unit for males, with bed space for about 550 inmates.

Graves said that 200 inmates at the facility have been tested for the virus, of whom 152 have tested negative.

All of the inmates who tested positive are in a single barracks that is being quarantined, Graves said.

In addition to the two state prisons, the virus has infected 335 inmates at a federal prison complex in Forrest City, according to Smith.

Of the 862 active cases across the state, Smith said 295 are in correctional facilities, 90 are in nursing homes and 477 are in the general population.

He said 64 covid-19 patients were hospitalized as of Wednesday, including 13 on ventilators.

Hutchinson displayed a graphic Wednesday showing how many active cases are in each county. Pulaski County, the most populous in the state, and St. Francis County, where the Forrest City prison is located, fell into the highest category, 100 or more.

Jefferson and Lincoln counties, where the two affected state prisons are, each have 70-99 active cases.

All other counties have fewer active cases, and many have none.

Smith said he doesn’t mean no one is infected in those counties, though. He said there are potentially cases that have not yet been diagnosed.

Gov. Asa Hutchinson and state health officials will provide an update on Arkansas' covid-19 response at 1:30 p.m. Check back to watch the live video.

[Video not showing up above? Click here to view » https://www.youtube.com/watch?v=T60JY-KFJOs]

This story was originally published at 10:59 a.m.