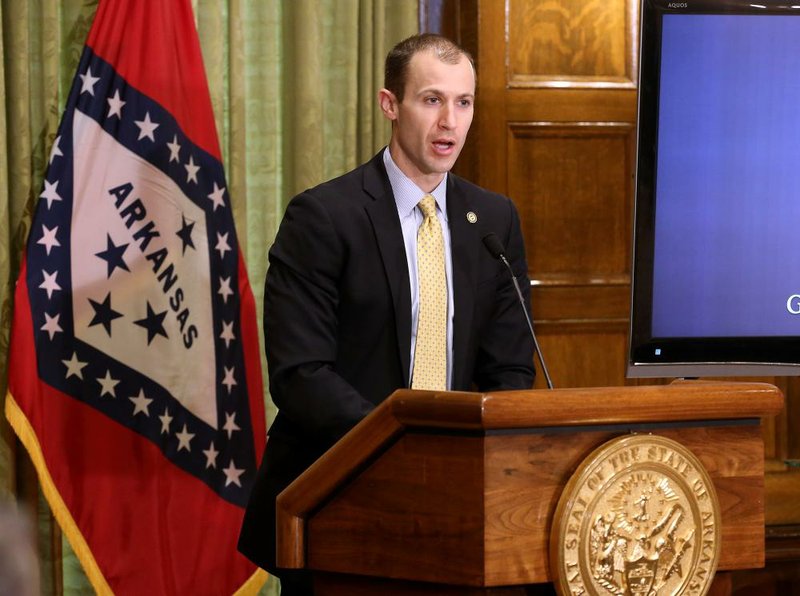 Arkansas Secretary of Commerce Mike Preston answers a question about unemployment during the daily covid-19 briefing on Friday, May 1, 2020, at the state Capitol in Little Rock. (Arkansas Democrat-Gazette/Thomas Metthe)

In hitting a target of providing at least 75% of available money to businesses with up to 50 employees, the Arkansas Ready for Business grant program will be able to fund requests of up to a total of $124.5 million, Department of Commerce Secretary Mike Preston said Wednesday.

The fledgling grant program, financed with federal funds, will help businesses cover coronavirus-related expenses associated with ensuring the health and safety of employees and patrons.

The Arkansas Legislative Council on Friday approved raising the spending authority to $147.7 million, which was the total sought by applicants.

Speaking before the steering committee created by Gov. Asa Hutchinson to recommend the best use of $1.25 billion in federal coronavirus relief funds, Preston said the Arkansas Economic Development Commission received 12,233 grant applications for businesses employing about 250,000 workers, or roughly 25% of Arkansas' workforce.

"What we agreed to with the Legislature was that 75% of all the funding would go towards businesses [with] 50 employees or fewer, so based on the applicants' numbers that came in, we had to go back and cull through 12,200 to figure out where we were in terms of our ability to spend," Preston told the Arkansas Coronavirus Aid, Relief and Economic Security Act Steering Committee.

"We will not be able to hit the $147 million, as appropriated by the [Legislative Council], in order to meet what the Legislature required, 75% of the monies going to businesses" with 50 or fewer employees, Preston said.

He said what officials decided to do, with the agreement of the governor and council co-chairmen Sen. Cecile Bledsoe, R-Rogers, and Rep. Jeff Wardlaw, R-Hermitage, is "we will make sure that we fully fund the businesses" with 50 or fewer employees at 100% of their requested funds.

"That will get us to 75% of the funding going towards those businesses," Preston said.

"The funding for this will total $124.5 million overall," Preston said.

Wardlaw said Wednesday night that his legislative district includes mostly businesses with 50 or fewer employees, so "I am happy" with the state's plans to distribute these grant funds.

Bledsoe could not be reached for comment by telephone Wednesday night.

Preston told the steering committee that "after we finish culling through the list and making sure all those that qualify are qualified, we'll get this money out as quickly as we can to get the economy start flowing.

"We'll do half of the grant upfront, so we'll do that immediately in a direct deposit to the business and then we'll ask the business to turn in and submit receipts and their plan and, as soon as we receive those receipts, we'll be able to disburse the second half of the funding," based on a request from the Legislative Council and discussions with inspector general's office, Preston said.

He said he wants to begin sending out the checks "as soon as we possibly can."

Preston said the Economic Development Commission is working with the state Department of Finance and Administration this week to to make sure there are no delinquent taxpayers among applicants. Delinquency would disqualify a company.

He said his team of 20 employees is reviewing an average of about 600 applications apiece.

"Those that are meeting the requirements are going into a batch and we should have those batches ready to go as early as next week," he said.

Rep. Fred Allen, D-Little Rock, who is a member of the steering committee, asked if there is a possibility that the funding could be in the hands of grant recipients by the end of this month.

Hutchinson initially announced the program April 29 and it went live online that afternoon. Within about an hour, the state received 2,392 applications seeking more than $36 million. Some businesses received word that the money would be available, but many did not.

The Republican governor subsequently acknowledged that the program was prematurely rolled out on a state website without legislative approval.

Meanwhile, Hutchinson outlined to the steering committee what he said he considers to be the next round of spending decisions that the committee needs to make. The committee includes eight of the governor's department heads, an aide to the governor, three senators and three representatives.

The requests for funds could be detailed in documents this week and could be considered during the next meeting, Hutchinson said.

First, he said, the state Department of Health needs funds for health care infrastructure for testing and contact tracing; the ability to do vaccinations when a coronavirus vaccine comes out; and for dealing with any upticks or resurgence of covid-19 next year.

"We hope that it dies out or reduces, I should say, in terms of the summer," Hutchinson said. "But everybody, from nationally to here to Arkansas, understands there is a risk of it trying to come back and peak again next year, so we want to be prepared for that and build the infrastructure."

Secondly, Hutchinson said he has asked higher-education leaders, including University of Arkansas System President Donald Bobbitt, to outline their needs for health care infrastructure to be prepared next year. He said the estimated cost is about $15 million.

The Department of Health would work with the University of Arkansas for Medical Sciences under this initiative, he said.

"The design and the concept is we will be able to build a testing capability for higher education that will available across the state," he said. "For example, we would be asking for five testing sites that serve the entire state in terms of higher education.They would be partnering with UAMS, which would include UAMS Northwest and the regional campuses. That would allow rapid testing of our college students [and] our personnel, if we have positive tests or a potential outbreak in a campus," contact tracing and the required deep cleaning, he said.

Thirdly, Hutchinson said he envisions another partnership between the Health Department and UAMS on antibody testing infrastructure, but he didn't have a cost estimate.

"We want to be able to do antibody testing that allows us to know who has had it before and it gives us a greater body of information and understanding of where we are in the state of Arkansas, so the design is that we would have this antibody testing capability that would allow us to do 3,000 tests per day," he said.

These three items form the important part of the state's capability for next fall to be ready for school and "whatever might happen in terms of covid-19," Hutchinson said.

In addition, he said Arkansas PBS will seek funds, initially estimated at $11.5 million, because "in the corners of the state they didn't have coverage and this would give them the capacity to build that infrastructure so they could cover the entire state for that online education."

Hutchinson said emergency medical technician providers and ambulance services will seek an estimated $9.1 million for compensation for their service providers during the pandemic. 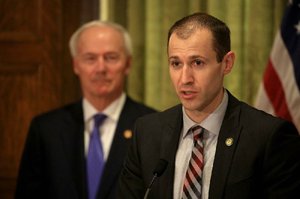 Photo by Staton Breidenthal
Secretary of Commerce Mike Preston, right, along with Gov. Asa Hutchinson speaks Monday May 4, 2020 during the daily covid-19 briefing at the state Capitol in Little Rock. (Arkansas Democrat-Gazette/Staton Breidenthal)