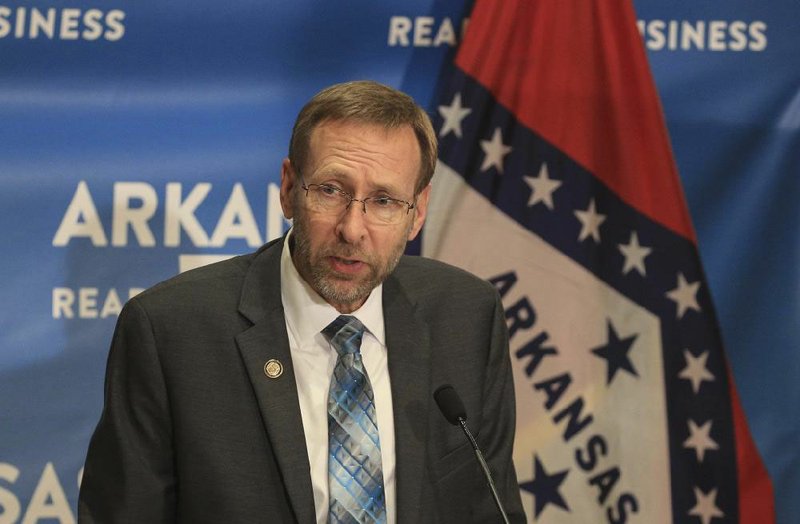 An outbreak of the coronavirus at a state prison in Pine Bluff has led to the infections of at least 45 inmates, state officials said Wednesday, making the facility the fourth lockup in the state where multiple inmates have tested positive.

The new cases did not yet appear to be reflected in the state's official count of total cases, which rose by 72 between Tuesday and Wednesday afternoons. Only one of those cases was a prison inmate, state Department of Health Secretary Nate Smith said.

The 72 new cases increased the state's count to 4,236 as of Wednesday afternoon.

Meanwhile, the deaths of two more Arkansans were reported, raising the state's toll from the virus to 97.

Also on Wednesday, two more of the state's casinos announced details of their plans for reopening Monday with precautions to limit the spread of the coronavirus.

And at his daily news conference on the pandemic, Gov. Asa Hutchinson said the state is on track to meet his goal of testing 60,000 Arkansas -- about 2% of the state's population -- this month.

He compared testing to a "radar system" that will help the state identify potential outbreaks as businesses continue to reopen.

"We have to learn to live a manage and to work through the potential of covid-19 in the next year, until we get a vaccine, and to accomplish that, testing is a critical part of that infrastructure," he said.

[Video not showing up above? Click here to watch » https://www.youtube.com/watch?v=VQ7LD5ybRpc]

Solomon Graves, a spokesman for the state Department of Corrections, said the outbreak at the Randall L. Williams Unit in Pine Bluff appeared to be isolated to a single barracks at a modular unit that is set off from the prison's main housing building.

Testing at the prison started Sunday and wrapped up Monday, he said.

Smith expressed optimism that health and prison officials would be able to contain the outbreak. He said two staff members at the unit had also tested positive.

"Once we've tested everyone, we know who's positive, who's negative, who's exposed, who's not exposed, at that point it's fairly easy to bring an outbreak under control," Smith said.

Health officials have tested all 200 inmates at the modular unit, and 152 of those tests came back negative, Graves said.

He added that the department and health officials have decided not to expand testing to additional Randall Williams' barracks outside the modular unit.

The overall population at the prison, which houses minimum- and medium-security inmates, has been reduced in recent weeks by early releases implemented in response to the pandemic. The prison held 518 inmates Wednesday, Graves said, down from its capacity of around 560.

In addition to the 45 inmates who tested positive, three inmates whose tests were inconclusive but are believed to have the virus are quarantined with other positive-tested inmates, Graves said.

At the Federal Correctional Complex in Forrest City, Smith said three more inmates have tested positive, raising the total identified cases among inmates there to 335.

At least 17 staff members at the prison have also tested positive, according to the Health Department.

The U.S. Centers for Disease Control and Prevention was still testing inmates at the prison Wednesday and was expected to finish today, Smith said.

No new cases were reported at the Cummins Unit in Lincoln County, where the virus has infected 900 inmates, including seven who died, and 60 staff members.

The Central Arkansas Community Correction Center in Little Rock was the site of an earlier outbreak that infected 63 inmates and 27 staff members, including at least one staff member who died.

The inmate cases are added to the state's official total as information from laboratory reports are entered into a state database, a process that often takes several days.

A report from the Jefferson County coroner's office identified one of the Cummins Unit inmates who died from the virus as Morris Davis, a 70-year-old from Boone County.

According to court and newspaper records, Morris was serving a 10-year term for manslaughter after killing his wife, Lisa Davis, in 2010, as well as for convictions of abuse of a corpse, tampering with evidence and manufacturing a controlled substance.

Morris was appealing his case, and in a March 24 letter to the Boone County Circuit Court he wrote that he had become "extremely ill" and was hospitalized Jan. 24-28. The handwritten letter does not state what Morris' illness was in January. The state's first case of covid-19 was identified March 11.

According to the coroner's report, Morris died at Jefferson Regional Medical Center on Friday because of complications from covid-19.

A report from the Pulaski County coroner's office last week identified another inmate who died as John Young, 70. The Corrections Department hasn't released information about his sentence or the names of the other inmates who have died.

The 71 new cases among non-inmates that were reported Wednesday followed a record increase of 100 such cases a day earlier.

The most recent cases included five from St. Francis County, where Forrest City is located and accounted for at least 27 of the non-inmate cases from Tuesday, Smith said.

In addition to workers and inmates at the federal prison, employees at a Belleville Boot Co. factory in Forrest City are also among those who have become infected.

A Health Department spokesman said Wednesday that 36 employees had tested positive at the factory as of that morning.

Craighead County had 10 of the cases that were added to the state total Wednesday, the largest number of any county, Smith said.

Of the 4,236 cases in the state as of Wednesday afternoon, 862 were considered active, meaning the person had not died or recovered, Smith said.

That was up by 13 from the number of active cases a day earlier.

People are generally considered recovered when at least a week has passed since they fell ill and they haven't had a fever in at least three days.

The Health Department has also classified people as recovered if at least 14 days has passed since they tested positive, they haven't died or been hospitalized, and the department hasn't been able to reach them to ask about their symptoms.

At Wednesday's daily news conference, Hutchinson and Smith displayed a map showing that 30 of the state's 75 counties did not have any active cases.

That includes Cleburne County, where the virus infected a dozen members of a church in Greers Ferry in March and was linked to the deaths of four residents.

It also includes Calhoun and Little River counties, where no residents have tested positive.

Twenty-three counties had at least one but fewer than five active cases.

Smith cautioned that a county with no active cases that have been identified could still have residents who are infected.

Of the state's 862 active cases, 295 are prison inmates and 90 are residents of nursing homes, Smith said.

To help increase testing in the state, the state's federally funded community health centers have pledged to increase their testing from about 200 a week to 2,000 a week, LaShannon Spencer, chief executive of the Community Health Centers of Arkansas, said at Hutchinson's news conference.

She said the centers identified St. Francis, Jefferson and Crittenden counties as "key counties" and will work with faith-based organizations to offer testing on Sundays.

A shortage of supplies had limited testing in the past, she said.

"We've gotten more swabs," she said. "We've been able to work with Quest [Diagnostics] and LabCorp, and just ensuring that we actually have the proper supplies to be able to perform the number of tests."

"I would say every day it improves," he said. "Things are getting better, and hospitals are getting the supplies they need and the Health Department continues to help us."

Smith said the University of Arkansas for Medical Sciences Medical Center and Baptist Health have announced plans to screen all patients admitted for inpatient care for covid-19.

The Health Department can provide swabs and material needed to transport specimens to providers who need it, he said.

He said the department is also exploring possibilities to increase testing at nursing homes, dialysis centers and hospital emergency rooms.

"There's lots of opportunities for us to do testing in a way that doesn't just boost our number but is strategic in identifying cases so that we can stop the spread of covid-19 and ultimately save lives," he said.

Hutchinson announced last week that casinos will be allowed to reopen Monday under the state's plan to gradually lift some restrictions on businesses.

Casinos must operate at a third of their capacity and have a detailed plan approved by the Health Department on how they will limit the spread of the coronavirus.

Oaklawn Racing Casino Resort in Hot Springs and Southland Casino Racing in West Memphis said in a news releases Wednesday that their plans include checking the temperatures of all customers, requiring customers and employees to wear masks, and prohibiting smoking.

Oakland said it will also limit customers to playing on every other slot machine, and limit blackjack and craps tables to three players per table.

The casino will not offer simulcast racing or live entertainment.

"While we understand this timing might not be right for some people, just know we will be ready and safe for you when you are," General Manager Wayne Smith said in the news release. "The health and safety of our guests and team members are of the utmost importance."

Later Wednesday, the plans for Southland and Oaklawn were approved.

"I think all three of the casinos in our state have really taken this very seriously and have gone to very detailed measures to try and make their facilities really as safe and clean as possible," he said.

Southland said it will reduce the number of its slot machines and not offer table games, live racing or sports betting.

Carlton Saffa, project manager of Saracen Casino Annex in Pine Bluff, said last week that his casino's plans also include requiring masks of customers and employees. He said the casino will turn off some slot machines and separate others with plastic-glass barriers.

"Last week we provided the state with an extensive plan, focusing on guest and team member safety," John Berrey, chairman of Saracen Development and Quapaw Nation, said in a statement Wednesday.

"The response we've received from Secretary Smith and his team has been positive; as a result of our dialogue we've extended our plan to include additional protocols. As of Wednesday afternoon we have not received final approval of our plan, but we are confident we can meet the expectations of state officials and the public."

He said the casino will open Monday if its plan is approved.

The latest deaths added to the state's total were in Faulkner and Washington counties, bringing the Health Department's count of virus deaths to three in Faulkner County and five in Washington County.

An infection of a worker at Silver Oaks Health and Rehabilitation in Camden brought the total number of nursing homes or assisted-living facilities where at least one worker or resident has tested positive to 51.

The number of residents at the facilities who have tested positive increased by 17, to 354.

That included an increase of 12 residents at the Ash Flat Healthcare and Rehabilitation Center, bringing the total number of residents there who have tested positive to 30.

Two residents at that home are among 38 nursing home or assisted-living facility residents in the state who have died from the virus.

Information for this article was contributed by Michael R. Wickline of the Arkansas Democrat-Gazette and by Cassidy Kendall of The Sentinel-Record in Hot Springs. 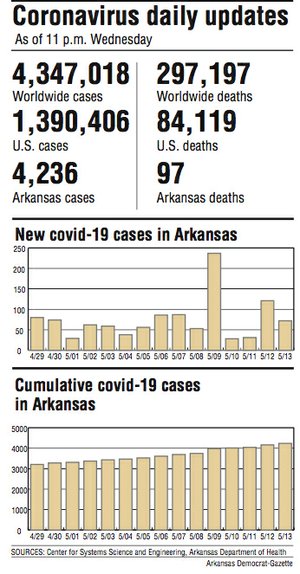 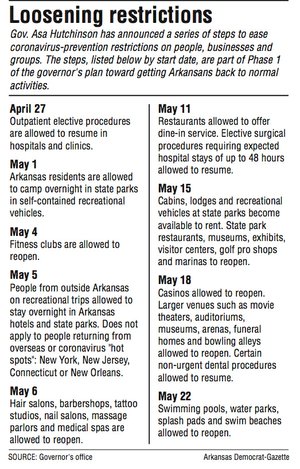