An oasis in quarantine: Couple offer stories to community 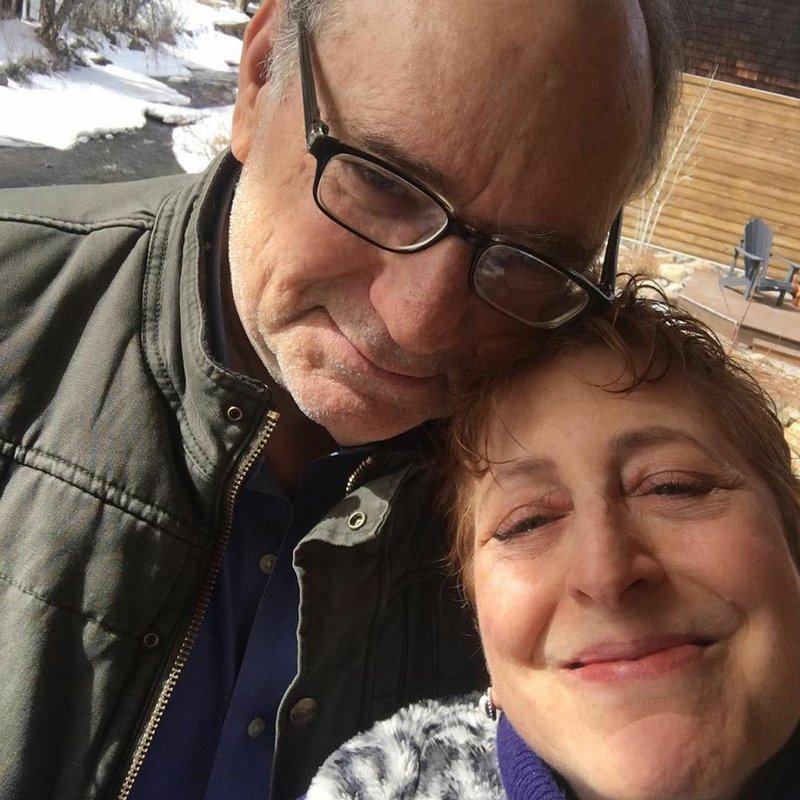 "When we talk about children's books, a lot of people who haven't read one in many years tend to think of them as being simple or simpleminded, inane," Mark Graff muses about books written by his wife, Crescent Dragonwagon. "The vocabulary is simple, but the emotions are vivid and the emotions raised are important to everybody. You can learn a lot from considering something very simple." (Courtesy Photo)

Crescent Dragonwagon is known internationally for her relationship with food. She is the author of books like The Cornbread Gospels, Bean by Bean and Passionate Vegetarian, which won the James Beard Award in 2002. She's taught at Brightwater: A Center for the Study of Food, has appeared on television, radio, in newspapers and blogs, wrote and appeared in Until Just Moistened: A One-Woman Show with Crumbs, and her recipe for Greek Lentil and Spinach Soup with Lemon made The Washington Post March 8 as a dish perfect for folks facing quarantine in the covid-19 pandemic.

Perhaps more important to Northwest Arkansans, Dragonwagon was -- with her late husband, Ned Shank -- founder of Dairy Hollow House, a wildly popular country inn and restaurant in Eureka Springs in the 1980s and '90s.

"When I was 20-ish, I was a young environmental activist, and I really didn't think the world would last this long," she remembers. "All the things we see happening now -- sea levels rising, floods, hurricanes, fallout from mistreatment of the planet -- I thought all that was going to happen much more quickly and drastically. So I didn't expect I, or the planet, would live long enough to see 60.

"Then, at 25, I met Ned. I thought he and I would grow old together, happily.

"When I was widowed at 48, I thought: that's it. Never going to remarry. Might have a boyfriend (eventually did) but never love passionately again."

Which brings us to Dragonwagon's less public relationship, this one with a cybersecurity guru named Mark Graff, and how the quarantine has made him a partner in an ongoing effort to reach out to people through the magic of storytelling. You see, Dragonwagon is also the author of some 30 books for children, and she is the literary agent for her late mother, Charlotte Zolotow, who wrote some 80 books for youngsters. And since shortly after the quarantine began, she -- with Graff's help -- has been reading those books aloud to online audiences.

"I deeply believe that action tends to be empowering when we are emotionally overwhelmed," Dragonwagon says. "Action is a self-soothing thing for me. If I'm unhappy about, oh, say politics, I go register people to vote. And if you feel like that action is helpful, that's even better. I knew kids were going to be trapped at home, and any little fracture present in the family would become more noticeable under pressure. So I thought, 'What can I do that would help?'

"I thought, 'Well, I could start reading a children's book every night,' and after the first night, five or 10 people said, 'I hope you keep doing this.' And I thought, "I'll make up my mind a week at a time.'"

The first challenge was how to hold the book and show the pictures while also reading it -- and that's where Graff came in.

"He was way over-qualified for the job," Dragonwagon quips.

Dragonwagon and Graff connected online nearly seven years ago and soon after, met for lunch.

"Even walking to the restaurant together, we went deep in conversation, quickly," she remembers. "As we ate, I kept thinking, 'THIS is a really interesting man.' When he excused himself and got up to use the bathroom, I texted my best friend, 'Out on a date. I think this is the one.'"

"Because of the geography involved, I never thought it would work out," adds Graff, who sits for a Zoom interview with his arm around Dragonwagon's shoulders.

"Nevertheless, I reached out just because I couldn't let such a gem fall through my fingers without letting her know I saw her. I got lucky."

"The initial circumstances under which we met made long-term appear completely out of the question," Dragonwagon adds. "For several years I thought we would have a longish passionate love affair that would eventually run its course (and I would appreciate every moment of it until it did).

"But the first time he visited me in my home, I was cooking, and my oven self-locked (something it had never done before or since). A pan of roasting vegetables actually caught fire. There was a moment when we were both standing in front of the oven, watching the small conflagration inside the oven through the little window, and we were doubled over with laughter. I thought, 'This is a domestic moment. Our first!'"

"A beautiful heart, a first-rate mind, and a great sense of fun all made me think she was a real keeper," Graff adds. "But when we began dating we were each, in our own way, unattainable as partners."

"The bumps, to me, have never been on the practical side," Dragonwagon muses. "We are pretty good strategists individually; we usually find ways to make things integrate in the time-and-space sense. We both have good ideas, respect for the other, and some willingness to yield if we see something is important to the other.

"The pull towards each other was powerful. We both wanted it," she goes on. "Even when I wholly didn't get what he was doing or feeling and was frustrated, bewildered, angry, scared we might not be able to get through our differences, I felt deep respect for him (in addition to the attraction, chemistry, etc). I'd try to find out why... to get curious.

"Making the decision to marry did chill a lot of this out."

Dragonwagon was widowed in 2000, when Ned Shank was riding his bicycle and was struck by a car and killed near Eureka Springs. Another long-term relationship ended in 2014 when her partner took his life.

"We work hard at respecting each other, and each other's past," Graff puts in. "But I tell you, it's not easy sometimes being the partner of someone who has effectively been widowed twice. Crescent is sometimes fearful for my safety to a degree that seems excessive to me. Also, she is adored by hundreds of people, many of whom are men. So I have to share her with her public and her friends, and that's not always easy for me. We are getting better at talking about all this, and Crescent is pretty well tuned in to my feelings at this point and makes substantial effort to show me I'm her No. 1."

In their 60s, the couple decided to marry for both romantic and practical reasons.

"I love and like him. Respect him. He is interesting, has a fierce, unconventional intellect, highly literate, unbounded curiosity, integrity galore: holds himself to high standards. Highly literate. Great chemistry. He is (somewhat surprisingly) also ultra-handy, good at fixing things. I will probably never understand him completely, but that to me is part of the spell he cast over me," Dragonwagon says.

"It should also be said, that at our ages, Social Security and like matters -- mortality -- play a part in these decisions. It would be insane not to look at them beforehand.

"Mark is a protector/defender down to the cellular level (it is what he does professionally, preventing cyberterrorism). I think he felt, generously, that marriage was one more way he could protect me. (I will say that I have always been very independent and in some ways still am. I never looked to a partner to take care of me. ) It has taken me awhile to open up or trust the idea of 'being protected.'

"Given my experiences with widowhood and other matters, sometimes I look down at this beautiful Persian rug that's in our living room, which was our first joint purchase for our new home [in Fayetteville], and I think, "OK, rug, when are YOU going to get pulled out from under me?' However, when I allow myself to surrender to this side of him, along with the other pleasures of his company, it is extraordinarily luxurious. Maybe temporary, because life is temporary. But I am filled with gratitude for every minute of it."

"I'm in it for the duration," Graff says. "Making that commitment was something I wanted to do, for her and for me. Also, at this age it's only responsible to recognize that infirmity and death are certain to appear in some form, and a firm legal commitment is the best foundation for mutual care."

As they both look forward to a lifetime together that includes "work (we both love our respective callings, and both feel we've still 'got game' as he says) and play -- fixing the house, reading, talking, going on walks, occasionally traveling -- preferably abroad, preferably doing walking tours," Dragonwagon says, "I very much want us to stay healthy, stay physically, emotionally and intellectually engaged with each other, egg each other on to the next thing is, be generous to our community. Maybe most of all, because one never knows how long one has, especially when one is (to one's shock) a freakin' elder -- to revel in the moment to moment."

Not all of those deep thoughts are reflected in children's books, but Graff says listeners might be surprised at the lessons to be learned about topics as large as death, loss and divorce and as small as wanting some privacy as a child.

"When we talk about children's books, a lot of people who haven't read one in many years tend to think of them as being simple or simpleminded, inane," he muses. "I think Charlotte Zolotow was one of the pioneers in tackling serious or important subjects for children.

"The vocabulary is simple, but the emotions are vivid and the emotions raised are important to everybody," he says. "You can learn a lot from considering something very simple. Simple experiences can lead to profound insights.

"Here we are during this incredible moment in the world's history, and people need recreation, need diversion, for their mental health, and one of the things about books is that you can't read a book and check out Facebook at the same time," Graff concludes. "If you're reading a book, you tend to be immersed -- that's one of the reasons why books can be a bridge toward insight in a way movies and TV don't really do." 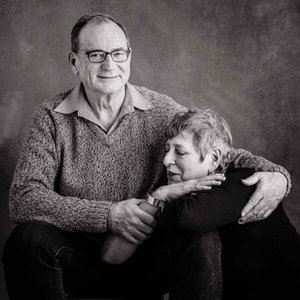 Newly married and living in Fayetteville, Mark Graff and Crescent Dragonwagon have been reading her books and those written by her lte mother, Charlotte Zolotow, at 6 p.m. every day on Facebook as their gift to the community in quarantine. (Courtesy Photo/Andrew Kilgore)

Print Headline: An oasis in quarantine