Dining out OK, but no music for dessert -- yet 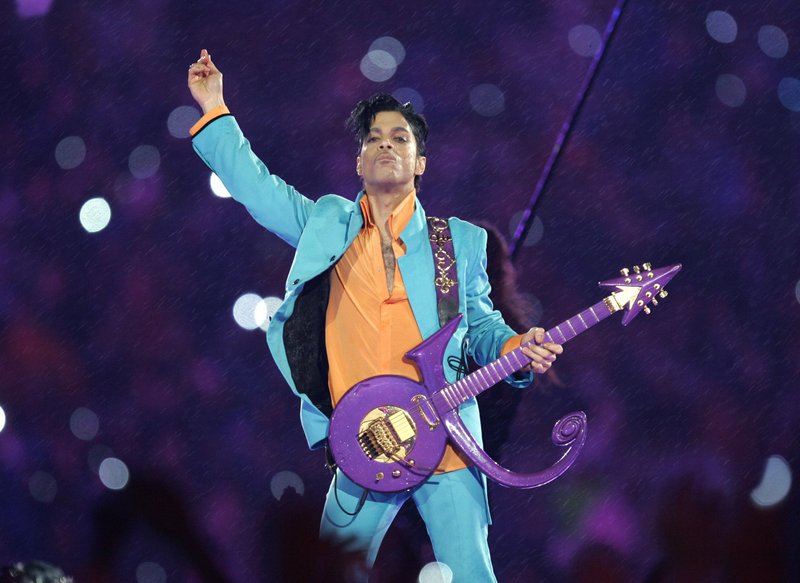 Prince is shown in this 2007 file photo performing during halftime a Super Bowl XLI. The late singer's Prince and the Revolution: Live, filmed in 1985 in Syracuse, N.Y., will stream on Prince's YouTube channel today beginning at 6 p.m. It will remain there and free to view until Sunday. (AP file photo/Chris O'Meara)

Not so fast there, Kemo Sabe, as Tonto allegedly used to say to the Lone Ranger.

Being mathematically challenged, we can't begin to imagine what some of our regular joints might accommodate, so we asked some of them that semimusical question.

As he has said previously, Matt White, co-owner of White Water Tavern, reiterates that "we will not be opening anytime soon here at the White Water. Definitely through at least May ..." You'll have to continue to get your dive bar fix from viewing the outside of the joint on Saturdays from 11 a.m. to 2 p.m., when the parking lot becomes a farmers market/food truck site.

Ryan Harris, executive director of the Oxford American Literary Project, Inc., which oversees the musical programming at South on Main, says a plan has not been made. "Don Dugan, as new owner of South on Main, will be the ultimate decision-maker."

"At this time we have no guidelines from the state on when we can open for concerts at SOM so therefore we have none planned. We are going to take this time to change the menu and clean up the business and see if we can get back to being known as a restaurant first that has great live music instead of the other way around. We are opening Dugan's... to the public and will do the same with Dizzy's... If we catch a spike, I am liable to put a pin in the dine-in aspect if it looks like we cannot keep our staff and our guests safe," says Dugan.

Chris King, co-owner of Stickyz Rock 'n' Roll Chicken Shack and the Rev Room, says "Right now we don't anticipate opening Stickyz before May 21, but that could be pushed as late as June 1, depending on how the daily numbers are trending in the state. The Stickyz mainstage will hopefully start making noise by mid-June. It's possible our patio stage could see some acoustic performers before then. Rev Room will not reopen before July 2."

Meanwhile, back on the online front, where we await a return to something like normal, there are some intriguing new options, from local folks, big acts and even at least one legendary deceased superstar.

Local musicians Stephanie Smittle and Stephen Koch can be seen and heard on a video of a musical performance at decarceratear.org/unboxedbenefit. Other performances are by: Marquis Hunt, Adam Faucett and Ren Gudino. The performances were part of a recent fundraiser for decarceratear.org, an organization that describes itself as "a nonprofit working to affirm human dignity by confronting unjust systems. We envision a world where equity, healing and reconciliation replace systems of punishment and oppression."

Singer-songwriter Isaac Alexander has recorded a new album, Future Sanctuary, and he hopes to have it out by July. The co-founder of local alternative country band Big Silver, Alexander has also been with Brad Williams of The Salty Dogs in recording cover songs and posting them on Facebook. The songs include The Everly Brothers' "So Sad to Watch Good Love Go Bad," The Louvin Brothers' "Bald Knob, Arkansas" and the hymn "He Can Be Found," Buddy Holly's "Learning the Game" and Connie Francis' "My Heart Has a Mind of Its Own."

That legendary deceased superstar just happens to be Prince, who died April 21, 2016, at the age of 57. His estate, in conjunction with YouTube, will host a three-day streaming event of Prince and the Revolution: Live, a historic concert captured at the Carrier Dome in Syracuse, N.Y., on March 30, 1985. The concert shows Prince and the Revolution at the peak of their Purple Rain Tour, and was the first live concert footage that Prince officially released as a TV special and a home video, according to a news release from the Prince Estate.

Today, beginning with a pre-show special at 6 p.m., during which fans can participate in a Q&A with Revolution drummer Bobby Z, moderated by Andrea Swensson of Minnesota Public Radio. At 7 p.m., fans can watch together on Prince's YouTube channel.

The concert will be available on the channel until Sunday at 11:59 p.m. The streaming event supports the Covid-19 Solidarity Response Fund for the World Health Organization. Viewer donations will be matched by Google to the tune of $2 for every $1 up to $5 million. Visit Prince.com for more entertainment and follow @prince on Instagram, Facebook and Twitter.

"Performing in lock-step with his incredible, tightly rehearsed band -- which featured Wendy Melvoin, Lisa Coleman, Dr. Fink, Mark Brown, Eric Leeds, and Bobby Z., along with a cast of special guests -- the live concert in Syracuse included Purple Rain hits like 'Let's Go Crazy,' 'When Doves Cry,' 'I Would Die 4 U' and 'Purple Rain' in addition to other early career favorites like '1999,' 'Little Red Corvette,' and 'How Come U Don't Call Me Anymore,'" the release says.

Paste Magazine continues to create fine content, so to speak. Some of the latest: "The Best (and Worst) Music Collaborations of Quarantine So Far," "The Best Horror Movies on Hulu Right Now Ranked," "The 25 Best action movies on Netflix Right Now (May 2020)" and "Hear Miles Davis Soar in a Career-High Moment on This Day in 1971."

The magazine's online entertainment schedule for today includes Ben Gibbard frontman for Death Cab for Cutie, streaming live from his home on his band's YouTube site at 6 p.m.; Josh Groban at 8 p.m., who will share his "Bridges Live: Madison Square Garden," and will take part in a simultaneous Q&A Kevin Morby and Katie Crutchfield of Waxahatchee (named after a creek in Alabama, where Crutchfield grew up) will livestream from their home weekly at 8 p.m.; and Scott and Seth Avett of The Avett Brothers will perform a free concert for baseball fans at 9 p.m. on the Facebook site of The Atlanta Braves.

In addition, the magazine's site offers The Paste Happiest Hour at 4 p.m. Monday through Friday at Paste on YouTube, where "you can wind down your day with a glass of something nice and an interview with one of Paste's favorite people."

Paste also notes that Pickathon.com continues to offer "Pickathon's A Concert a Day" through a partnership with The Recording Academy, every day for 60 days, with all donations benefiting the MusiCares Covid-19 Relief Fund directly.

Those pining for a road trip to Cleveland to visit the Rock and Roll Hall of Fame can at least visit virtually at rockhall.com/explore-online. Fans can see check out: Early Influencers, Performers and "dive into 34 years of induction ceremonies."

For a wide assortment of music videos, look at corona-live.live/category/music and you will find music by KT Tunstall, The National, Radiohead (with a weekly concert film), Jason Mraz, Laura Marling and Miley Cyrus.

Ross Ellis, a singer-songwriter from the small town of Monterey in our southern neighbor, Louisiana, is showcasing what he calls his "vast catalog of songs he's written" at @RossEllisMusic on Instagram or Facebook. He started his posting of songs April 9 and puts songs on the sites daily at 6 p.m. Tim McGraw has recorded a song, "Neon Church," which Ellis co-wrote.

Matt Stell, the 6-foot, 7-inch Center Ridge native who played basketball at Drury University in Springfield, Mo., hit big in country music in 2019 with his song, "Prayed for You." The song became the only No. 1 hit by a new artist last year, and the song has found favor with couples getting married.

Sadie Robertson Huff, a cast member of the TV reality show, Duck Dynasty, recently enlisted Stell to surprise two couples whose weddings were postponed due to the coronavirus. Huff posted a video to Instagram of her chat with the two couples who had planned to use Stell's song, and later they were joined by Stell on a Zoom conference. He performed an acoustic version of the song for the surprised couples and the video has been viewed more than 350,000 times.

Print Headline: Dining out OK, but no music for dessert -- yet