TAKEOUT TASTINGS: Food on the fly 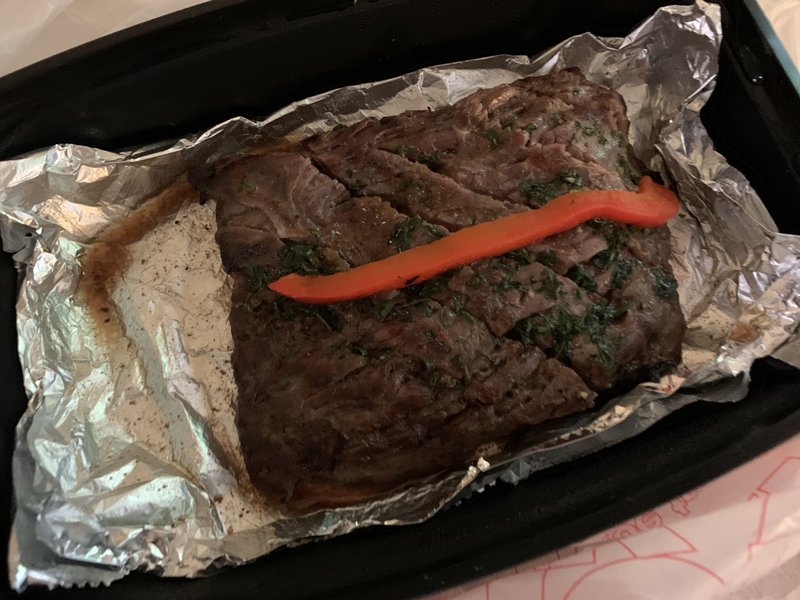 Some area restaurants this week reopened their dining rooms to accommodate up to a third of their seating capacity while maintaining social distancing between diners, requiring masks and other protective gear for staff and customers and assorted safety procedures, designed to reduce the chance of communicating creepy crawly coronaviruses via culinary contact.

Nobody, not the most optimistic proponents of reopening the economy, is expecting any restaurant to make its money back-feeding just one-third of its potential patrons. So along with the many restaurateurs who are expressing caution or who have successfully remade themselves into takeout and delivery destinations, all of these places will pretty much have to continue to also deal in to-go orders to survive.

Thus this column, our take on takeout. We're occasionally popping out of social shutdown to pick up a few meals from locally owned establishments, paying for them up front (as we always do with all the meals we review) and describing the results to you, our loyal readers.

WHAT WE GOT: Classic Pepperoni ($4.99 6-inch, $8.99 10-inch, $13.99 14-inch, $21.99 18-inch) with mozzarella and original red sauce, to which you can add mushrooms (or jalapenos or onions) at no additional charge, which we did. Damgoode has been doing some of the area's best Italian-but-non-Neapolitan-style pies for years (our list also includes Vino's and Iriana's, if you must know). Damgoode offers three crust options: thin, hand-tossed and "stuffy" (double-crust with extra everything and sauce on top) and a number of sauce and cheese options, but we've always found they do pretty well with plain ol' red sauce and standard "scamutz". Their hand-tossed crust is moderately chewy. Our pizza actually had, or appeared to have, more mushrooms on top than pepperoni.

HOW IT WENT: We'd have likely done better just calling our order in than in trying to negotiate the rather cumbersome and somewhat Byzantine online ordering system, but we eventually got our order through, and the pizza was just coming out of the oven about 15 minutes later when we walked up to the sliding window. That window has apparently always been on the pie-shaped building's Kavanaugh Boulevard side but we had never seen it open before; since the pizzeria has gone entirely to curbside takeout, that's how customers access the cash register and pick up their pies.

HOW IT'S GOING: There seemed to be a steady stream of walk-up and pickup business on a recent weekday, with delivery vehicles leaving this location, and the outlet on Cantrell Road in the Heights has been busy.

WHAT WE GOT: White Truffle Mac & Cheese ($19) and a side salad with blackberry champagne vinaigrette dressing. We reprised our experience with this dish, which we consumed on the premises for a December review, in which we described it as "small pasta shells (replacing the erstwhile macaroni) baked en casserole in a bubbly sauce of bechamel and truffle oil with large chunks of chicken, mushrooms, spinach and sun-dried tomatoes." The portion is still big enough to feed two and was certainly far too large for one person for lunch. It comes with a modest side salad of field greens with a sort of pico de gallo centerpiece of diced tomatoes, onions and cucumbers, which had sort of slid to one side of the foam clamshell in transit; we made the easy and probably correct choice of the blackberry champagne vinaigrette over ranch.

HOW IT WENT/HOW IT'S GOING: Late in a lunch cycle, ours was the only order pending, and though curbside is supposedly an option, we had to physically enter the restaurant to pay the masked and gloved server and pick up our food.

WHAT WE GOT: Flank Steak ($18), medium rare, with one side — the Mixta Side Salad, lettuce, tomato and a lot of onion with the house vinaigrette. We ordered the steak because it looked like the best lunch option and because we forgot about the empanadas. The steak, on balance, turned out mostly medium rare, but the thinner end was definitely medium well. And though it wasn't tough, exactly, we had difficulty negotiating it using plastic cutlery. It was certainly well seasoned and tasty, and adding some of the chimichurri from the accompanying plastic cup gave it a very pleasant accent. We had to pull the overabundance of sliced red onions off to the side of our salad of dark greens, and a little bit of the vinegary vinaigrette went a long way.

HOW IT WENT: The restaurant is on the lower floor of a two-story building that once housed the final incarnation of Juanita's Cantina; curbside hand-off is apparently possible but we found ourselves descending a fairly steep wooden staircase into the patio level and entering the restaurant to get our food, which we ordered through a comparatively easy online process.

HOW IT'S GOING: There's a table by the bar with marked divisions for curbside and the restaurant's third-party delivery system, but our lunch order, though ready, was still in the kitchen when we arrived and there were no other orders awaiting pickup. The single server was wearing a mask and gloves.

WHAT WE GOT: Pollo con Chorizo ($10), which we had tried in our on-premises review shortly after the restaurant opened in the River Market last year: chicken breasts, flat-pounded and surprisingly moist, tastily topped with the house chorizo, which has a nice kick but is reasonably mild, and a queso that was thicker on the dine-in version. That also came with mushrooms, which we didn't find on this version but didn't miss; on the side we got a clump of fairly flavorful cilantro rice and firm charro beans in a sort of soupy broth. The house "newsprint" wrapped three flour tortillas.

HOW IT WENT: We placed our order by phone with a gentleman whom we had to prompt to give him our pickup name. That probably should have been a tipoff. He didn't bother to tell us that the pickup entrance is on the rear patio; the front door is locked and we made at least two stops at locked-fence entrances on our pickup odyssey before we found the right spot. Our order was, however, ready on time; we paid for it on the premises.

HOW IT'S GOING: A handful of other lunchers were waiting to pay and pick up when we got there.

WHAT WE GOT: Edamame with smoked salt and garlic ($6) and Tuna Tataki ($18). Kemuri was pretty good when Jerry Barakat sold it about 15 months ago to a couple of doctors, who, though they themselves had no restaurant-operating experience, knew and loved this restaurant and also knew to hire the best people to help run it, joining the best people who were already there. We'd like to personally thank sushi chef Haidar Assegaf for the tuna tataki, something we had not previously tried here — it's on the list of sushi-bar starters, not on main menu — and which turned out to be a real treat. We got several slices of pepper-crusted tuna, accompanied by a cake of seasoned sushi rice topped with a layer of blue crab meat and garnished with avocado, with a little cup of Asian chile sauce. That added an additional kick to the very lively pepper crust on the fish and also to the crab-meat-and-rice side. We're big fans of edamame (that's soybeans steamed in the shell) and the smoked salt-garlic dusting on this one gave it a whole new taste dimension.

HOW IT WENT: Kemuri now takes orders only outside the restaurant, over the phone (preferred) or at the front door, where a menu rests upon a service table; you can pay in advance or on-site. A server, masked and gloved, dashes in and out of the front door, carrying orders in black plastic bags to customers waiting in cars or, while maintaining as much social distancing as is practical, the occasional person who walks up to the front of the restaurant. Our phone order was ready in the time promised, though we had a short wait for it based entirely on busy-ness of the single server, and since it was sushi-based, we didn't worry whether it would still be hot when we got it home.

HOW IT'S GOING: On a recent weekend evening, there was no time during our short wait for our order when there was not at least a half-dozen cars lined up along the 2600 block of Kavanaugh Boulevard.

Print Headline: Food on the fly