Unaware of any discussion on changing date for November vote, he says by Timothy Bella The Washington Post | May 14, 2020 at 4:19 a.m. 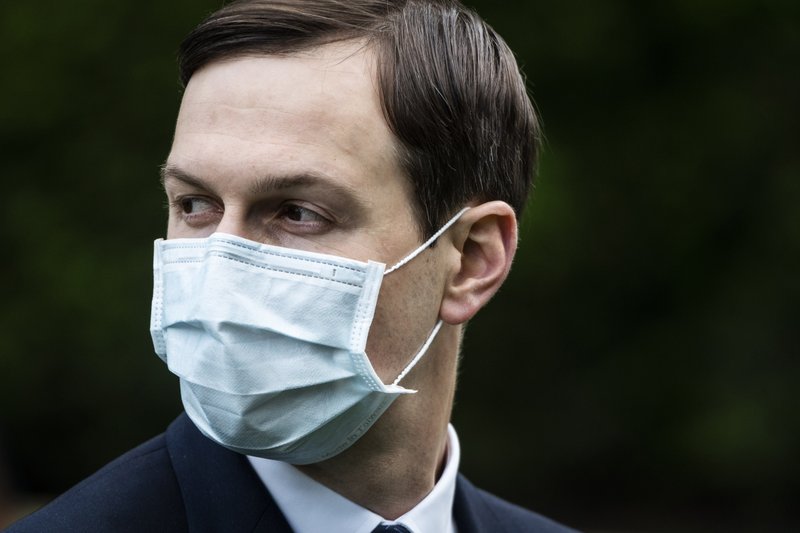 Jared Kushner, wearing a face mask, listens as President Trump delivers remarks during a press briefing on testing with administration officials in the Rose Garden at the White House on May 11, 2020 in Washington.. (Washington Post photo by Jabin Botsford)

Senior White House adviser Jared Kushner suggested Tuesday that there was some uncertainty about whether the presidential election would happen in November as scheduled because of the coronavirus pandemic and that he had some role in making that determination.

Hours after his remarks to Time magazine generated a reaction on social media, Kushner issued a clarification, saying he was unaware of and not involved in any "discussions" about changing the date of the 2020 election. Neither President Donald Trump nor Kushner as his adviser has any legal authority to change the timing of the presidential election. Kushner is Trump's son-in-law.

The brief episode raised doubts about Kushner's familiarity with the laws and constitutional provisions governing U.S. presidential elections. As the Congressional Research Service says, "The text of the Constitution does not appear to contain a constitutional role for the Executive Branch in such decisions."

A federal statute says that Election Day is to be held on the Tuesday after the first Monday in November.

"Since 1845, Congress has required states to appoint presidential electors on the Tuesday after the first Monday in November, which represents the date by which voters in every state must cast their ballot for President," according to the Congressional Research Service.

Kushner's comments are particularly fraught because some critics, such as former Vice President Joe Biden, the presumptive Democratic nominee, were already on high alert for an attempt by Trump to put off the election because of the coronavirus outbreak.

Biden offered an explicit warning to a group of donors last month about the potential for the election to be moved, The Washington Post's Annie Linskey reported.

"Mark my words, I think he is going to try to kick back the election somehow, come up with some rationale why it can't be held," Biden said during a virtual fundraiser.

Kushner's noncommittal on the election date is at odds with his father-in-law's public position.

"The general election will happen on Nov. 3," Trump said at a news conference last month.

In Kushner's interview with Time, he said that while it wasn't his decision to make, he wasn't certain he could say the election would happen on Nov. 3 if there was a second outbreak of coronavirus in the fall.

"I'm not sure I can commit one way or the other, but right now that's the plan," he said. "Hopefully by the time we get to September, October, November, we've done enough work with testing and with all the different things we're trying to do to prevent a future outbreak of the magnitude that would make us shut down again. I really believe that once America opens up, it'll be very hard for America to ever lock down again."

"Kushner's statement reveals amazing ignorance of the Constitution and law," tweeted Bill Kristol, the neoconservative political commentator and editor at large of the Bulwark. "It reveals startling arrogance in taking for granted he gets to have some say about when the election is held. It also reveals an utter lack of understanding of his very subordinate role in our democracy. "

"Even putting this question to [Kushner] is an insult to the rule of law," she tweeted.

Kushner gave a follow-up statement to NBC News, with the White House clarifying that he knows the election date is set by federal law.

"I have not been involved in, nor am I aware of, any discussions about trying to change the date of the presidential election," he said.