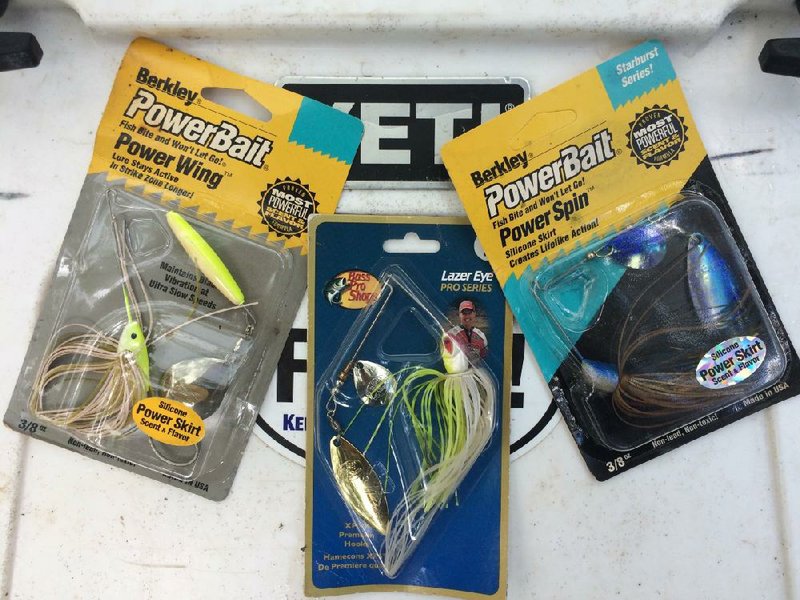 Spinnerbaits come in a variety of styles and colors, but most have a single blade, like the Berkeley Power Wing or tandem blades. Tandems usually have a willowleaf blade and Colorado blade. (Arkansas Democrat-Gazette/Bryan Hendricks)

Once upon a time, the spinnerbait was the go-to lure for most bass fishermen across the land.

It fell out of favor thanks to an onslaught of sexy new techniques and baits popularized by anglers from the western states, but the spinnerbait continues to catch fish as well as ever. In fact, it might even work better because fish don't see it very often anymore.

The traditional spinnerbait is essentially a jig on a wire frame. The jig and hook are on the bottom half of the frame. At the terminal end of the upper frame is a free-spinning blade. Many spinnerbaits also have a second blade inboard of the terminal blade. When the lure moves underwater, the blades spin, creating flash and vibration. The back blade spins freely, allowing it to wobble. You can fish it shallow or deep. You can also retrieve it very slowly in deep water along the bottom.

The wire acts as a brush guard and shock absorber. The hook is inverted and tucked inside the frame, making a spinnerbait resistant to snagging. That makes it an excellent choice for fishing fallen or standing timber, brush piles and aquatic vegetation.

A miniature version, Blakemore's Roadrunner, is very popular for catching bream and crappie.

An inline version contains the weight, blade and hook in a single linear unit. Mepps, Panther Martin and Blue Fox are the most popular brands. Professional anglers don't use inline spinnerbaits, but they work very well. My most memorable catch occurred on July 3, 2004, on Missouri's Eleven Point River when I caught two chunky smallmouth bass at the same time on a Blue Fox.

Mepps is very popular in the Great Lakes region for catching northern pike and muskellunge. I also hooked my biggest brown trout on the Little Red River with a Mepps Aglia in 1991, and a big trout on a Mepps Comet at the Snake River in Wyoming in 1975.

Finally, there is also a topwater variation called the buzzbait. Instead of twirling blades, it has a piece of metal with upturned edges. It forms a propeller that throws water and sputters when retrieved across the surface.

I learned to use a spinnerbait one hot summer night in 1991 while fishing on Lake Conway with the late "Daddy" Leo Coffman. A lifelong neighbor of my wife's parents, Daddy Leo made his own spinnerbaits in his garage, and they were very popular among Central Arkansas anglers until Coffman died in the 1990s. Coffman poured and molded his own heads and made his own frames.

Coffman called everyone "Daddy." One afternoon he said, "Daddy, I'm going to take you to Lake Conway tonight and show you how to catch fish on a spinnerbait."

That's exactly what he did, too. He kept the back of the boat out in deep water where I couldn't fish, and he spent all night showing me how to catch fish with a spinnerbait. He caught and kept my limit, too. I was mighty sore about that, but I did learn some things. The most important item was the Leo Coffman Spinnerbait Knot. It's easy to tie and it is very strong. I still use it today.

I also observed that Coffman practically threw his spinnerbait onto the bank. Sometimes he actually did throw it on the bank, where the blades clinked and clattered against dry ground before splashing into the water. Coffman swore that the commotion attracted bass. From his results, I believed him. Coffman also caught bass that night fishing his spinnerbait through lily pads, off boat docks, off standing timber and in water that had no cover.

The process was simple. Cast and retrieve. As we discussed with crankbaits last week, a spinnerbait is very effective when it bounces off cover. The collision makes a thump and makes the blades clatter. It also makes the lure jump or carom. The combination of stimuli triggers a sensory overload that provokes bass to strike.

A willowleaf blade is long and tapered. A Colorado blade is spoon shaped. Use silver blades for clear water and clear skies. Use gold blades for stained water and overcast skies.

A 3/8-ounce head is standard, but a 1/2-ounce head sinks faster in deep water. A 1/2-ounce spinnerbait will also bust through cover better than a lighter version.

You can use spinnerbaits effectively with spinning tackle. In shallow water, a spinnerbait works best if it is moving the instant it hits the water. With practice, you can master the timing necessary to do this with a spinning rig, but it is a smoother, more effortless exercise with a baitcasting rig.

There is nothing tentative or uncertain about a spinnerbait bite. Bass hit them with extreme prejudice. The strike sends an unmistakable jolt through the line. When it happens, wait a split second and then set the hook by sweeping your rod across your hips, like swinging a baseball bat. The hookup is almost always sure. Seldom does a bass throw a spinnerbait while jumping.

Because a spinnerbait has only a single hook, there's no threat of getting multiple hooks in your hand. The dangling treble hook of the inline spinnerbait is an exception to this rule.

With the crankbait and spinnerbait, you can cover most of the water column. Next week we'll discuss how to catch fish on the bottom and in places that moving baits can't go. 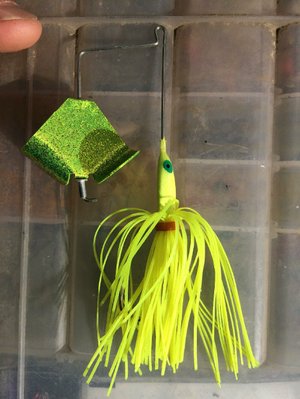 The buzzbait is designed as a topwater lure. The blade sputters and throws water. (Arkansas Democrat-Gazette/Bryan Hendricks) 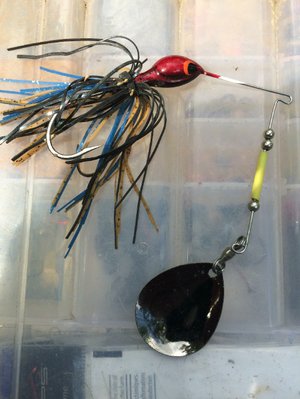 A handmade Leo Coffman “Peanut Head” spinnerbait was very popular in Central Arkansas for decades. This one has a black Colorado blade. (Arkansas Democrat-Gazette/Bryan Hendricks)