REVIEW: 'Driveways' is a subtle, quiet film about human connections 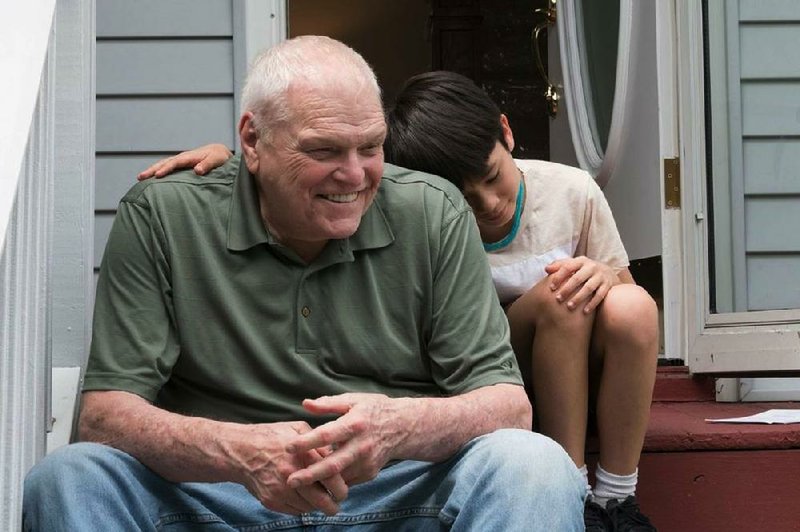 Del (the late Brian Dennehy, in one of his final movie roles) befriends the gentle and introverted Cody (Lucas Jaye) in Driveways, a low-key story about the commonality of human experience that’s the antithesis of Hollywood’s would-be blockbusters.

One of the things we might think about during this time-out is how things can be different.

This film is available for streaming on Amazon Prime, iTunes and other VOD platforms.

You all know this. But a lot of nice people don't. It wasn't that long ago that I overheard someone recommending Bong Joon-ho's Parasite to a (just barely) socially distant friend who admitted she hadn't heard of the best picture winner. It's not just the one-inch-high barrier of subtitles some people can't surmount, it's the very idea that a movie might have an adult sensibility. That they might not have to buy into the conventional grammar of the would-be Hollywood blockbuster.

It has taken a virus to disrupt our subscription to Hollywood product, to the sort of titles that battle it out in the box office reports (that we treat with the reverence of sports scores), but that disruption is not all bad. While we can still long for 007 and the demi-gods of the Marvel Cinematic Universe, it's not a completely bad thing that the noise has been repealed until the cineplexes can open again. Because the silence of the heavy drums allows for different frequencies to be heard.

Driveways, a tender and hopeful film that focuses on a friendship between an 8-year-old Asian-American Cody (Lucas Jaye), and his elderly neighbor Del (the late Brian Dennehy, in one of his last performances), is one of those alternate songs. It is quiet and earnest and less than 90 minutes long. And if you watch it, it will make you feel better.

Cody is a shy, difficult child who has trouble relating to kids his own age and adults. He's being raised by single mom Kathy (Hong Chau, who you might remember from her role as a political dissident in Alexander Payne's 2017 film Downsizing).

When we meet Cody and Kathy, they are driving cross-country in a station wagon. Kathy has inherited a small clapboard house in a leafy older suburb in upstate New York from her estranged older sister April. She intends to clean the place out and put it on the market. They arrive at night to find the power turned off. Del watches them from his window next door as they drive off to a motel for the evening, then settles into a solitary dinner and a ballgame.

The next day, they go back, and Kathy discovers her sister was a hoarder and it will probably take them a lot longer than the three or four days she had budgeted to make the house presentable. There's a $900 bill that has to be settled before the electricity can be turned back on. There's a dead cat in the bathtub. And Del's sitting on his front porch next door, wearing his baseball cap identifying him as a Korean War veteran.

Because we have seen movies before, we may expect that we are about to see some variation on Clint Eastwood's Gran Torino play out, and maybe you could characterize Driveways in that fashion. But screenwriters Hannah Bos and Paul Thureen didn't make any racial specifications in their script, and this is a story without shocking reversals that offers a balm more subtle than catharsis.

While Cody and Kathy have to navigate a world full of micro-aggressions and muted racism, this is not about changing hearts and minds via some sudden revelation that we are all more alike than different. All these characters change a little, but the dramatic arcs are small and subtle.

Kathy drives Del to the VFW to play bingo because it's obvious his friend forgot to pick him up. It's a decent thing to do, nothing heroic.

Del is gruff, but not unkind. He spends lonely days on his porch and evenings with a dwindling knot of old buddies. He has no animus toward his new neighbors; maybe he -- like Cody -- just has trouble making friends.

As it turns out, Kathy's neighbors didn't know April was a hoarder; this is the sort of American town where no one goes inside anyone else's house. And, as the neighbor on the other side, Linda (Christine Ebersole), observes, "April really kept to herself." Kathy didn't really know her sister either, and as she cleans, she comes across photographs and other clues to a lonely woman's life.

Cody tentatively makes friends with some of the neighborhood kids while avoiding Linda's physically rowdy (but hospitable in their feral way) grandkids. He is a preternaturally well-behaved kid who is made physically ill by the thought of violence and prefers reading to fireworks. (Kathy calls him Professor.)

He spends his days reading comic books and playing games on his tablet, and slowly he develops a quiet friendship with similarly taciturn Del. They don't have to say much, it's enough for them just to sit together.

Sitting together is not an inherently cinematic activity; neither is eating pizza on the front porch with your mom. Driveways is one of those movies that some people might not recognize as a movie, a string of small poignant moments that feel transcribed from experience.

Directed by Andrew Ahn, whose 2016 feature Spa Night is a similarly subdued (though somewhat more freighted) exploration of loneliness and family, Driveways provides a canvas for some remarkable performances. All the principals are excellent, and Dennehy is especially good in a role not too different from the one he played in 2008's Arkansas-shot War Eagle. (He made a lot of friends here while shooting that movie.)

His shining, heartbreaking movement comes at the end of the film in a conversation he holds with Cody on his porch about his life, his late wife, and the things he never noticed, the opportunities he missed and the things he regrets. It's a stunning, devastating speech, and the great character actor's voice wavers but never cracks.

Driveways is both lean and contemplative, with an emotional heft that belies its short running time. Like a .38 Special on a bedside table, this little movie is heavier than it looks. 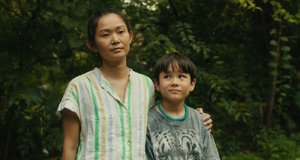 Kathy (Hong Chau) drags her son Cody (Lucas Jaye) from Michigan to upstate New York on a mission she mistakenly thinks will take only a few days in Andrew Ahn’s quiet study of how to make a family, Driveways.

Print Headline: All the lonely people