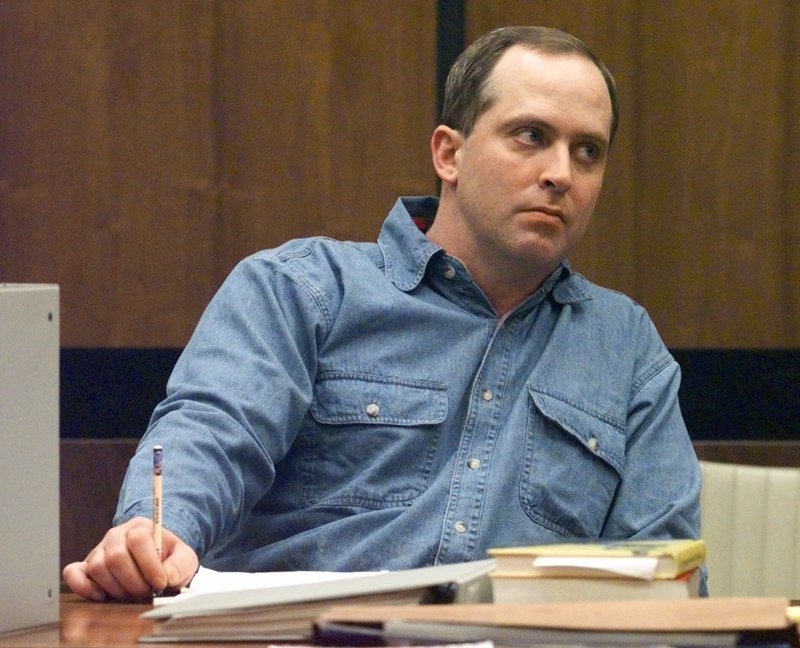 In this file photo Robert Todd Burmingham watches proceedings during jury selection for his trial Monday, Nov. 16, 1998, at the Cross County Court House in Wynne, Ark. Burmingham is accused of using a flashing blue light on a car to pull female motorists over and then assaulting them. (AP Photo/Danny Johnston)

Robert Todd Burmingham, dubbed the "blue-light rapist" who was accused by his victims of using flashing blue lights to pull them over, died Wednesday while serving a life term at the Cummins prison, officials said.

A Pulaski County coroner's report released Thursday states that Burmingham, 54, had tested positive for covid-19 and had been admitted to UAMS Medical Center. Gov. Asa Hutchinson confirmed at a Thursday news conference that Burmingham had covid-19, the infection caused by the coronavirus.

The Cummins Unit in Lincoln County is the site of an outbreak that has infected 900 inmates, killing eight. The unit is operated by the state Department of Corrections.

Burmingham was convicted of raping two women in eastern Arkansas in 1997. One of his victims, a 17-year-old from Lonoke, told police that she was pulled over while traveling alone on a state highway and then sexually assaulted.

Authorities also suspected Burmingham of two other similar rapes in which women reported that their attacker used police-style blue lights, though Burmingham never faced trial on those charges.

The search for the blue-light rapist lasted nearly two years and involved a number of police departments in the Arkansas Delta working along with the Arkansas State Police.

Fear of the rapist became widespread and police in several cities, including Little Rock, reported an increase in drivers failing to pull over for legitimate police cars, according to newspaper records.

"It still stands without a question as one of, if not the largest" investigations in state police history, said agency spokesman Bill Sadler.

Nearly 50 troopers were assigned to the case, Sadler said, before troopers arrested Burmingham, then 31, at a farm shop where he worked near his home in St. Francis County.

Police used Burmingham's DNA to connect him to two rapes that occurred in Cross County.

In the first case, tried in 1997, Burmingham was sentenced to 80 years in prison for rape, aggravated robbery and kidnapping. The second case, in which Burmingham was accused of breaking into a 35-year-old woman's home in Wynne and raping her, ended in a hung jury in 1999. The next year, prosecutors tried the case again and secured a life sentence for Burmingham.

Burmingham continued to maintain his innocence while in prison.

Police around Arkansas have continued to report occasional incidents of impersonators using phony police lights to pull over motorists, including women driving alone, in the years since Burmingham's arrest, according to newspaper reports.

In 2017, lawmakers passed "Shannon's Law," named for one of Burmingham's victims, which increased the penalty for anyone caught illegally possessing blue emergency lights.