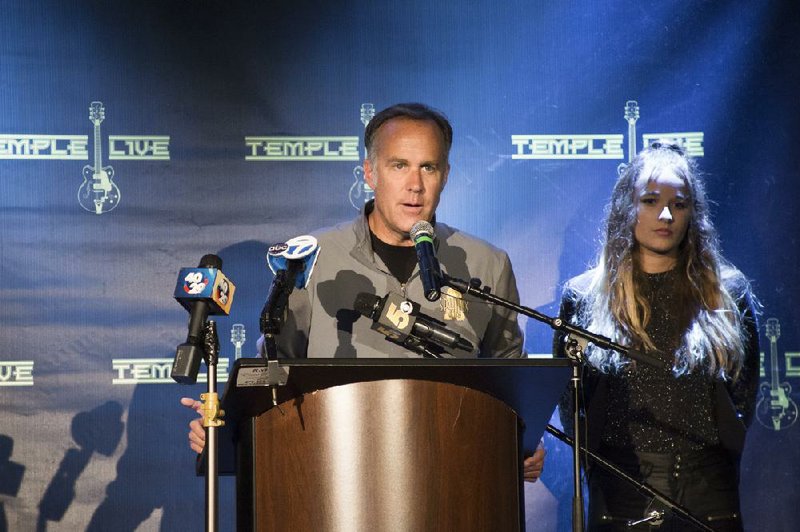 Mike Brown of TempleLive said Thursday that the business was applying to move today’s show to Monday against its will. “It’s very Minority Report and Westworld, which I thought were pieces of fiction that are now a reality in this country and this state,” Brown said. More photos at arkansasonline.com/515live/. (NWA Democrat-Gazette/Charlie Kaijo) ( Charlie Kaijo)

FORT SMITH -- A Fort Smith concert venue announced Thursday afternoon that it is applying to move a show from today to Monday against its will to comply with a directive from the Arkansas Department of Health and Gov. Asa Hutchinson.

Mike Brown, vice president of operations for TempleLive, said during a Thursday news conference that agents from the state Alcoholic Beverage Control Division revoked TempleLive's liquor license as the venue was evaluating and having discussions with the state over a cease-and-desist order.

"So basically, we've been punished for thinking about doing something, or considering while we're evaluating," Brown said. "It's very Minority Report and Westworld, which I thought were pieces of fiction that are now a reality in this country and this state."

TempleLive had planned a concert for today by Travis McCready, the frontman of Bishop Gunn, a blues-rock band from Natchez, Miss., which is three days before Arkansas officially reopens large indoor venues since closing them in mid-March because of the coronavirus pandemic.

The state and TempleLive discussed the issue for several days. The venue, however, continued to plan for the show as originally scheduled. State officials then issued a cease-and-desist order Tuesday for the concert, with Hutchinson saying the venue would face consequences if it moved forward with the show today.

Things escalated Thursday morning, when the Alcoholic Beverage Control Division suspended the club's liquor license. Agents from the division, which oversees more than 5,000 permits throughout the state, went to TempleLive to take the permit, according to agency spokesman Scott Hardin.

"Each permit holder must operate within the guidelines and directives established by the Arkansas Department of Health," Hardin said. "TempleLive is publicly announcing intentions to violate these standards, which will endanger public health and safety.

"As a result, [Alcoholic Beverage Control] Director Doralee Chandler today issued an immediate permit suspension order to TempleLive. [A division] hearing has been set for June 3. Following the hearing, [the division] will determine whether the permit will remain suspended.

[Video not showing up above? Click here to watch » https://www.youtube.com/watch?v=uZqACOFkzF4]

"Should Temple Live provide public confirmation that the concert scheduled for May 15 will not proceed, the permit will be returned."

Chandler's order states that, "This business is not operating in the public interest, and poses a danger to the public health, safety and welfare."

Chandler wrote that TempleLive was in violation of two parts of the Alcoholic Beverage Control Division's Rules and Regulations: Section 1.79(7), "failure to maintain health, safety and sanitary standards," and Section 1.79(32), "failure to be a good neighbor."

"Every holder of an Alcoholic Beverage Control permit shall be held to a high duty of care and will operate their business where beverages are sold or dispensed in a manner which is in the public interest and which does not endanger the public health, welfare or safety," according to Section 1.79(32).

Brown said TempleLive is applying against its wishes to move today's show. Tickets already purchased will be good for the rescheduled date.

TempleLive implemented safety protocols that exceeded U.S. Centers for Disease Control and Prevention guidelines, according to Brown. Despite this, he said, the venue was still restricted from having the show today.

"We announced the show late April in light of believing that on May 4, we would be given the same privileges as places of worship to congregate inside of a building with no restrictions on capacity and just to follow CDC guidelines on distancing and sanitizers," Brown said.

The TempleLive website states that the following operating protocols are in place at the venue:

• Venue will be sanitized before each event using fog sprayers.

• Masks will be available for purchase if desired.

• One-way walkways in the theater managed by TempleLive employees in accordance with CDC guidelines.

• Six feet of separation from all seating groups, or fan pods.

• Ten-person limit in all restrooms.

• All soap and paper towel dispensers will be no touch.

• Closure of bathroom fixtures to maintain 6 feet of distance during use.

• Temperatures of attendees to be taken at entry points.

• All beverages will be prepackaged or have lids.

• TempleLive employees will be wiping down touch points in venue and restrooms.

During a news conference Tuesday, Hutchinson said TempleLive had submitted a plan that would allow the venue to have more than 50 people in the audience but less than 33% capacity. However, this was not approved by the state Health Department.

"We just wanted to be treated fairly in regard to how other organizations are being permitted to gather," Brown said. "At the end of the day, we fought the law and the law's won."

"Here, the state has stepped on our constitutional rights in a cease-and-desist order that has no real substantial relation in science or actual medical fact," Beaty said. "There's no additional risk."

Beaty said he hoped Hutchinson is happy after saying that TempleLive will move the show. He also addressed the considerable media attention, including that from outside the country, that TempleLive received as a result of the event.

"And it's really not this show that all those eyeballs are on," Beaty said. "It's a show, but what it represents to the world is it represents hope. It represents, one said, that possibly people can get the lives back that they had, and that is done through the laughter and entertainment and the joy and hope of the live performing arts. And we had developed a protocol to allow first steps, and that's what the world is looking at, and those hopes were dashed today."

John Scott, partner with the law firm Conner & Winters and counsel to TempleLive during this process, said this has not been intended as a way for his client to thumb its nose at either public health or authority.

The news conference concluded with McCready and fellow musician Lauren Brown performing a song for those in attendance.

Hutchinson, a Republican in his second term, said TempleLive's decision to move the concert to Monday brought it "within the state's guidelines."

"And so we're grateful that they determined that they ought to follow the directive and the law and do the right thing for the concertgoer, but also for the public in general," said Hutchinson.

However, the venue still must submit a plan to the Department of Health if it wants to have more than 50 people in the audience.

"We're delighted that Monday, assuming that their health plan can be approved by the Department of Health and there are security measures there, then that concert can proceed and we're delighted to welcome the concert-goers there to that venue," Hutchinson said during his news conference.

Dr. Nate Smith, Arkansas' secretary of health, was asked at Thursday's news conference about TempleLive's argument that it was being treated unfairly because state guidance regarding church gatherings was more lax than for businesses.

"When we developed each of these directives, we had in mind each particular group that was involved in these directives," Smith said. "Obviously, a place of worship is different than a concert hall. There are some similarities but there are also some significant differences, especially with this event they're expecting people from a number of different states -- people who normally wouldn't come in contact with each another. So that really increases the risk of covid-19 transmission." 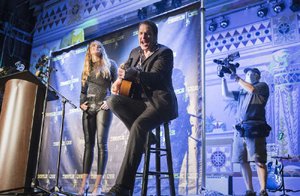