Sci-fi: Starmen and starwomen through the ages 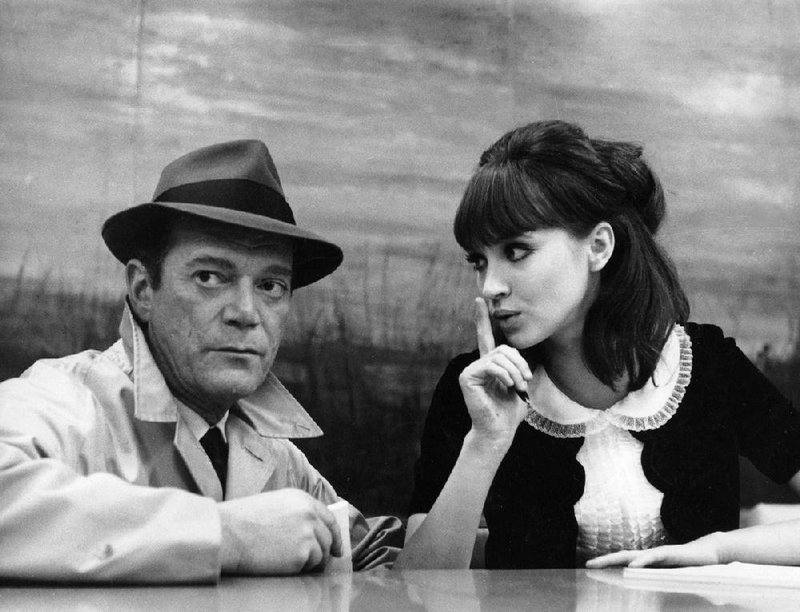 Whisper to a Stream: Sci-Fi

Like its twisty looking first cousin, Horror, the Sci-Fi genre has been responsible for some of the best -- and worst -- films in cinematic history. Exploring the possible future has always been on the minds of filmmakers (see 1902's Voyage to the Moon, aka A Trip to the Moon), and the format has attracted some of the best and most intellectually demanding directors of our time. Under the circumstances -- a world in which we are actually living through the dystopian future oft-suggested in older films -- the idea that we can move from this reality toward something substantially different remains an encouraging one.

Alphaville (1965): French auteur Jean-Luc Godard isn't known as a genre filmmaker, exactly. His career has included everything from meta-gangster film to arthouse collage, but this film, about an agent sent to the futuristic titular city on a distant planet in order to find a missing woman, and overthrow the despotic ruler, is Sci-Fi via the darkest of French noir (in this alien city, everyone wears trench coats, smokes fat cigarettes, and stalks the shadowy streets of what appears to be Paris). In this, as with the rest of his oeuvre, Godard's decidedly singular vision prevails.

Sample Dialogue: "Time is the substance of which I am made. Time is a river which carries me along. But I am time. It's a tiger, tearing me apart; but I am the tiger."

Annihilation (2018): An Alex Garland film whose reputation has only improved over time (some critics, ahem, initially read it more skeptically: "An off-kilter sci-fi mystery that shoots for confoundingly provocative but instead hits irritatingly obtuse"), it falls into the category of "densely complicated metaphor" -- see Solaris and Under the Skin, below -- in other words, the type of thing you can interpret in many different fashions, some of which is profound.

Sample Dialogue: "I thought I was a man. I had a life. People called me Kane. And now I'm not so sure. If I wasn't Kane, what was I? Was I you? Were you me?"

Blade Runner: The Final Cut (1982): You're forgiven if you don't take the title at its word: This marks at least the fourth version of Ridley Scott's hugely effective film, but this one seems to incorporate most of the director's cut while keeping many of the substantive changes from the international cut (it also enhances many effects, and alters others to look more believable, in case you're a theatrical purist). Actually, in whatever form you may see it -- even the original U.S. release with its hated voice-over guidework -- it's a breathtaking bit of filmmaking, well deserving of its peerless reputation.

Sample Dialogue: "The tortoise lays on its back, its belly baking in the hot sun, beating its legs trying to turn itself over, but it can't. Not without your help. But you're not helping."

"This is Zhora. She's trained for an Off-World kick murder squad. Talk about Beauty and the Beast -- she's both."

(NOTE: It is almost physically impossible for me to choose one quote from this movie.)

Dark Star (1974): John Carpenter's low-budget feature debut is a rollicking satire of uptight, pretentious Sci-Fi narratives (can't imagine which film he had in mind, there, though there's a clue in the tagline: "The Spaced Out Odyssey"), that also served as a springboard for a young screenwriter (and actor, in this case) named Dan O'Bannon, who would go on from this project to write Star Beast, later better known by its shooting title, Alien. As a comedy, the lo-fi special effects (including a menacing alien beanbag) play to the film's strengths. Carpenter would take a similar can-do spirit four years later, with Halloween.

Sample Dialogue: "Don't give me any of that intelligent life crap, just give me something I can blow up."

Her (2013): Set in the future, to be sure, but Spike Jonze's film hits so close to the near-present that it almost feels contemporary. Joaquin Phoenix plays a lonely writer of other people's letters, who gradually develops strong feelings for a new, incredibly advanced operating system, capable of independent thought and attitude (and voiced, enticingly, by Scarlett Johansson). As with much of Jonze's previous work, the film hits the nexus between the fantastical and the tragic with assured grace.

Sample Dialogue: "Sometimes I think I have felt everything I'm ever gonna feel. And from here on out, I'm not gonna feel anything new. Just lesser versions of what I've already felt."

High Life (2018): Claire Denis' film, set aboard a spacecraft once manned by a group of death-row prisoners on a suicide mission to a black hole, but now devoid of crew save a lone survivor (Robert Pattinson) and an infant baby he takes care of, works its way back in time, and then repeatedly jumps to the present (and in one memorable moment, the future). Filled with exotic imagery -- a separate ship now inhabited by dogs; a "pleasure room" (the actual title of which, much more profane), which attends to the inmates' carnal needs -- and its hilter-jerk sense of time, it hits somewhere deep in your subconscious.

Sample Dialogue: "The Sensation of moving backwards even though we are moving forwards, getting further from what's getting nearer, sometimes I just can't stand it."

Solaris (1972): Acclaimed Russian director Andrei Tarkovsky's film can be seen as a pointed retort to Kubrick's 2001 (he claimed it "sterile"). The film involves a psychologist (Donatas Banionis) sent to a distant space station orbiting a planet that exudes a sort of intelligence that scientists are straining to understand. It stands as the deepest of metaphoric-drawn narratives (and ergo, somewhat difficult to follow in places), but also as religious allegory. The tech may be refreshingly low-brow and under budget, but the conceptualization is brilliant.

Sample Dialogue: "We don't want to conquer space at all. We want to expand Earth endlessly. We don't want other worlds; we want a mirror. We seek contact and will never achieve it. We are in the foolish position of a man striving for a goal he fears and doesn't want. Man needs man!"

The Black Hole (1979): A '70s-era Disney movie with a bit of a kick -- and featuring special effects that at the time seemed groundbreaking. The story involves a research ship out in deep space just outside the range of a black hole, discovering a craft thought lost decades before, and now almost entirely manned by robots, save for a lone scientist who's obsessed with the effects of the physics-related abnormality. Possibly a good one for the kiddos, and any film with a cast including Maximilian Schell, Anthony Perkins, Yvette Mimieux, Robert Forster and Ernest Borgnine's eyebrows shouldn't be easily dismissed.

Sample Dialogue: "Kate, either there's something wrong with our communications, or there's too much interference from the outside. See if you can get through to V.I.N.CENT with your ESP."

The Man Who Fell to Earth (1976): What to say about Nicolas Roeg's barely penetrable psycho-freakout of a film? It features David Bowie as an alien come to Earth in humanoid form in order to procure water to save his people from dying out. The alien's complex plan involves starting a tech-based corporation in order to procure the funds needed to build his return ship, but those plans get diverted, one, by not counting on mankind's inherent greed; and two, by falling in love with an Earth woman (Candy Clark). Roeg's nonlinear style and calculated dissonance can be off-putting if you're not prepared for it, but the film remains a stalwart of stylish, obscure storytelling.

Sample Dialogue: "First, we'll have a drink. Then I'll have a bath. And tomorrow -- we'll go to church. Lord, I love gin."

Under the Skin (2013): The second film on this list to feature the great Scar-Jo, and this role, as a detached alien running amok in Scotland, in Jonathan Glazer's subtle opus, curiously echoes her stint as a self-actuated AI in Her. Here, she roams the dark streets of Glasgow in a van, searching to find men to seduce, in order to take them to her "place" where they are engulfed in a deep pool of what appears to be black oil, to be consumed later (reportedly, the initial encounters with the victims were filmed with nonactors, unaware, at first, they were in a film). The longer she stays on the planet, however, and as her human form continues to evolve, she finds herself at the sudden mercy of her growing humanity.

Print Headline: Sci-fi: Starmen and starwomen through the ages