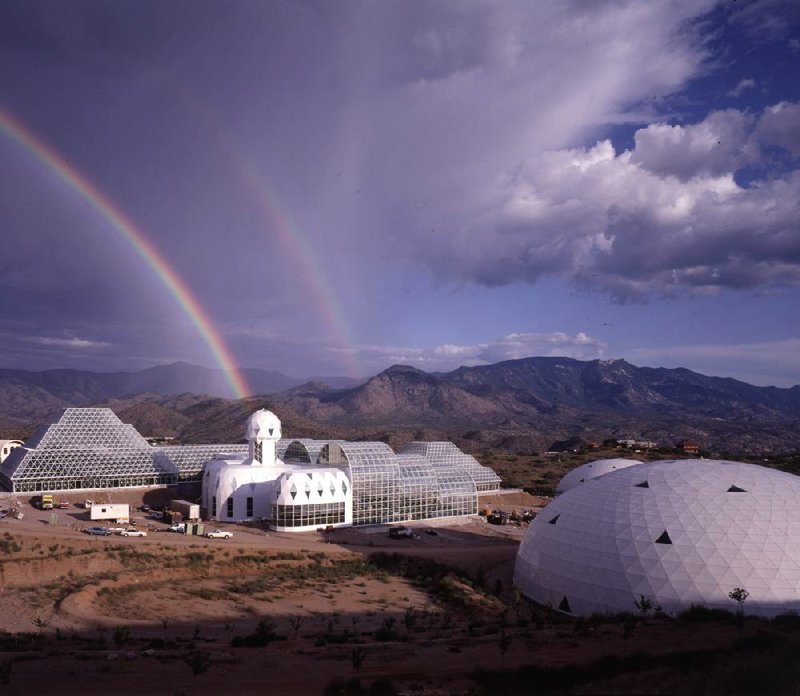 From 1991 to 1993, eight people sealed themselves off from the world in a three-acre terrarium — Biosphere 2 — near Oracle, Ariz., in an effort to demonstrate the possibility of living self-sufficiently. The documentary Spaceship Earth explores that experiment, which has been widely and unfairly dismissed as a failure.

The mighty steel-and-glass compound known as Biosphere 2 is a sight that never loses its beauty, its absurdity or its wonder. Jutting out of the hot, dry ground of the Sonoran Desert, it was designed as a microcosm of the entire planet and thus contains its own worlds in miniature: an ocean, a savanna, a rain forest. For two years, from 1991 to 1993, eight men and women sealed themselves inside this eight-story, three-acre terrarium and made it their research laboratory and their home. It was a scientific experiment and a domestic one, a test of how humankind might endure in a self-enclosed environment on this planet or the next.

The challenge of living in self-imposed isolation with limited resources is, of course, an especially relatable subject at the moment for reasons the filmmakers could hardly have anticipated. One way to approach Spaceship Earth, Matt Wolf's layered, absorbing and sympathetic new documentary, is as a madly inventive primer on responsible dystopian-hermetic living. But the film -- which is being shown at drive-in theaters, in pop-up cityscape projections and on multiple streaming platforms -- would make for fascinating viewing under any circumstances.

This film is available via virtual cinemas; also on Hulu and VOD

You may have read about Biosphere 2 in the news years ago, or perhaps you saw it parodied in the Razzie-winning 1996 Pauly Shore comedy Bio-Dome. Chances are you haven't heard much about it since. One of the key points of Spaceship Earth is that the valuable lessons that emerged from that two-year study -- the breakthroughs and the setbacks alike -- were drowned out by a media blitzkrieg eager to brand the mission an unambiguous failure. The coverage was dispiriting but also, the movie suggests, all too characteristic of a society that often greets idealistic, utopian thinking with cynicism and views science with boredom or contempt.

This is not to say that Spaceship Earth is entirely devoid of skepticism. Like any good scientific inquiry, it approaches its complicated subject with a willingness to entertain more than one possibility. Drawing on a remarkable trove of archival footage as well as present-day interviews with surviving Biospherians including Sally Silverstone and Linda Leigh, Wolf sifts through his subjects' work and gives their intelligence, dedication and vision its due. He also considers the widespread dismissals of the Biosphere 2 project as what one person calls "trendy ecological entertainment," a mix of irreproducible research and whimsical performance art.

Elsewhere, he weighs the accusation that John Allen, the intensely charismatic inventor, ecologist and writer who masterminded the project, possessed some of the qualities you might find in a cult leader. But Wolf also amasses other evidence, including the accounts of colleagues and the remarkable record of their accomplishments even before Biosphere 2. He concludes that while Allen was certainly many things -- an inventor, an ecologist, a metallurgist, a writer, a motivator, a manipulator -- charlatan does not appear to have been one of them. Allen seems to have been less interested in controlling younger minds than in nurturing them and pushing them toward their own independent avenues of discovery.

Wolf, who directed last year's Recorder: The Marion Stokes Project, takes his time wandering down those avenues. His interview subjects immerse us in their memories of a grand 1960s/'70s communal existence -- "a work democracy," as one of them puts it -- in which intellectual vivacity and manual labor were encouraged to flourish in tandem. Theirs was a remarkably holistic approach: Calling themselves the Synergists and sailing the world in a vessel they built themselves, they were a touring theater troupe, a construction crew and a force for social and planetary transformation. They were also, for all their activism, "quite capitalistic." As one of them acknowledges early on, none of their projects could have happened without significant cash flow -- in this case, from Texas multimillionaire Ed Bass, who financed Biosphere 2 and other Allen endeavors.

Science and art, capitalism and counterculture, principle and compromise: Spaceship Earth draws strength from its contradictions. (If you don't know what became of Biosphere 2, the movie also packs an ironic, infuriatingly nasty twist ending.) But it also shines an unwavering light on the worthy, even heroic impetus for the mission: the collective's deep concern for the environment and their early awareness, fed by books like Silent Spring and movies like Silent Running, of the seriousness of climate change. (Biosphere 1? That would be planet Earth.)

And so from the beginning, the experiment was predicated on sustainability. In filling the terrarium with plant and animal life from all over the world, Noah's Ark-style, the eight chosen Biospherians hoped to minimize their carbon footprint and build an ecosystem that would require no outside resources. For two years they rigorously nurtured that ecosystem, farming and eating their crops, and collecting and analyzing the data at every turn. Much of what we see in Spaceship Earth comes from day-to-day footage shot by the group's physician, Roy Walford, and it is fascinating to observe the Biospherians at work, to gain even a fragmentary understanding of what it was like to live, breathe, work and play under glass. (The filmmaking gets an invaluable assist from David Teague's fluid editing and Owen Pallett's evocative score.)

At times I found myself wishing for an even more extreme and prolonged immersion in Biosphere 2 life, something akin to the rigorous observational documentaries of Nikolaus Geyrhalter, whose recent Earth could join Spaceship Earth on a double bill about humanity's environmental impact. But the images here are remarkable all the same, and Wolf's decision to focus on minutiae -- the hard work of digging, harvesting and threshing, the challenge of baking a birthday cake without sweeteners -- is refreshing and instructive, especially for what he doesn't show us.

The inevitable tensions of living in close quarters with seven other people for two years are duly acknowledged, but the emotional, interpersonal dynamics remain largely an off-screen mystery. The reality-TV-style soap opera you might be expecting never quite materializes. Most of the human drama comes from without, from the muck and mire of managerial conflicts and public-relations gaffes. That the Biospherians didn't entirely succeed in their quest for sustainability -- they ultimately made use of a carbon dioxide scrubber, as well as fresh oxygen that was pumped in from outside -- became cause for ridicule from a public that had previously celebrated (and inevitably simplified) the project and its findings.

Spaceship Earth provides its own corrective to the wholesale dismissal of Biosphere 2 and to the kind of rigid binary thinking that suggests human progress can be measured only in unqualified triumphs and outright disasters. If the scientific method calls for relentless trial and error, then Allen and his collaborators clearly lived up to it, albeit under a much more sensationalist media spotlight than most. What they came to understand deeply in their two years of isolation is a lesson that is worth revisiting always, but especially in an age of global pandemic and climate change. There is no ecosystem too large to be imperiled, no action too small to have a consequence.