The Half of It: The life story some of us wanted 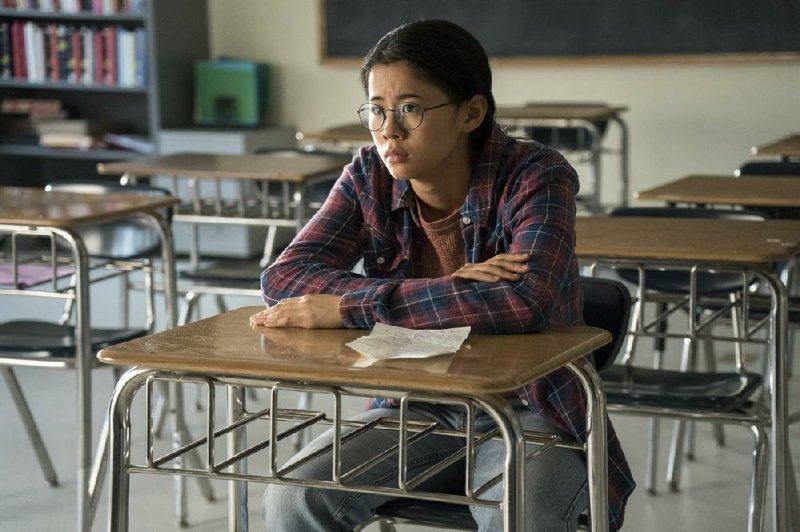 Ellie Chu (Leah Lewis) is one erudite high schooler in Alice Wu’s coming-of-age film The Half of It, now streaming on Netflix.

Another week in isolation and without movie theaters. C'est la vie. To Netflix, I go. I'd be lying if I said The Half of It isn't the kind of movie I typically like to watch. But I would also be lying if I said I had ample opportunities to watch movies like it, that is to say, intelligent movies, stories that remind you cinema is an art form instead of a vehicle for the continued evolution of special effects.

Alice Wu's new movie dropped earlier this month, and I'll confess, I didn't watch Wu's first movie, Save Face. But I saw a write-up for The Half of It after the first trailer dropped. I don't remember where, maybe on The Mary Sue or Vulture.

I get so frustrated when the two theaters in Fayetteville don't pick up a smaller release I want to see. Sure, the cinemas will pull in the latest garbage from Michael Bay or the latest spinoff from 2014's Anabelle, but you know what I would have really loved to see in theaters? Three Billboards Outside Ebbing, Missouri. Both of Fayetteville's theaters failed to grab Leave No Trace.

And sure, supply and demand. I get it. But give me a single showing on a Sunday afternoon. I want to say our local AMC has gotten better about getting more limited releases. To its credit, I was able to go see Brittany Runs a Marathon and Where'd You Go, Bernadette last year. Would I have been able to see The Half of It there if it was released in theaters? Who knows.

It didn't take me long to start enjoying the movie. The main character's name is Ellie Chu (Leah Lewis). And Lewis' performance is flawless. The booksmart and pragmatic high school senior who makes money to pay her family's electric bill by writing essays for other students? Holy crap. It was a joy to watch her story unfold and confidence build.

The story is set in a rural Washington town called Squahamish. Chu is tasked with writing the perfect love letter for a football player to impress his crush. A conundrum arises when Chu realizes she also has feelings for the football player's crush. The central cast consists of these three characters, and they're all strong. Their chemistry is undeniable.

The football player's name is Paul Munsky (Daniel Diemer). He's not great with words, but he makes up for that with dedication to self-improvement and trying to learn more about the things his crush, Aster Flores (Alexxis Lemire) cares about, like literature and old movies.

It's really the characters that make this movie so wonderful. Chu is this brilliant young lady who is trying desperately to figure out what she believes in. But she's used to being alone and has trouble showing her true self.

Munsky is a little dim, but he recognizes that and tries so hard to learn about art and philosophy just so he can have an enjoyable conversation with Aster. He's also the world's biggest goofball.

And Aster is another intelligent woman in her own right who struggles against doing what's expected of her (from fashion to marriage) and to define who she really is. She's also challenged to accept there might be a part of herself that finds attraction in the same sex, a big no-no for a preacher's daughter in a small conservative town.

These characters are well developed from Chu secretly learning to play the guitar to Munsky being obsessed with developing new sausage recipes and breaking from his family's traditional meat business.

Munsky and Chu are great to each other and really do build a rich friendship. He's so sweet, standing up to bullies for her and generally being charming in a doofus kind of way. And she's extremely kind, seeing his dreams of getting attention for new sausage recipes, and writing to food critics at every newspaper in the region to get him noticed.

And the side characters made me laugh so much, in particular, Becky Ann Baker, who played Chu's English (literature?) teacher. She's this grizzled educator who has amazing lines like, "Everyone in this town fears God, but you know who God fears? The Teachers Union." She also pushes hard for Chu to realize her own potential and attend college out of state.

Lead jock -- Trig Carson (Wolfgang Novogratz) and all-around perfect football champion of the school -- dates Aster throughout the film, and I love how they didn't paint him as a huge jerk. He's a spoiled kid from a wealthy family who owns half the town (very big fish in a small pond), and yet, I never hated the guy.

Watching Chu and Munksy dance a dance of deception with Aster and the heartbreak Chu feels in sacrificing her own feelings so Munsky could have a chance with the girl he fell for ... classic storytelling.

Then there are the themes The Half of It deals with, like just how messy love can actually be once you figure out what it is and how you feel it. There are themes of loyalty and being authentic, even if that puts you on a collision course with everyone else around you. Chu challenging Aster to not give up on herself, art or true feelings ... it was powerful to watch. And that's how I'd best describe this film, powerful to watch.

These characters are played so brilliantly I forgot I was watching a movie. When Munksy broke my heart a little before the film's climax, my wife and I groaned in unified frustration.

Perhaps the best scene in the movie comes during a Sunday morning church service at the story's climax. It's emotional, funny and chaotic. Munsky shows just how far his personal growth takes him, Chu finally realizes what true love actually is, and Aster stands at a crossroads, having to choose between authenticity and safety. Wu wrote a damn good scene.

Everything else in the movie -- from the soundtrack to the cinematography -- did a fantastic job of making me feel like I was back in high school again. Football game? Check. Talent show? Check. Party? Check. Awkward dinner date? Check.

If there is a flaw in The Half of It, it's ironically in the authenticity of the characters. Wu writes this compelling theme of self legitimacy. And yet, I don't think the movie shows small American high school life, so much as it shows what writers imagine a small American high life to be like. And getting so wrapped up in enjoying the movie, I almost didn't catch this distinction.

It's high school as adults looking back want it to be, instead of as it actually was. I went to high school in a small town with 1,000 people. Even the most astute person I knew in our class (Skylar Creel, who has a master's degree and works in a nuclear plant) didn't talk like the smartest characters in this movie.

I don't believe there are any high school students like Chu. She has all these great quotes like, "Gravity is matter's response to loneliness," and while that sounds fantastic, I didn't know a single high school student who talked like that. Granted, I didn't attend high school in the Pacific Northwest (just elementary school). Maybe things are different up there.

But I went to high school in a rural conservative town. I was in band and choir like Chu. And people quoting literature and discussing philosophy to win each other over just didn't happen. I guess that's what separates movies like Dead Poets Society from my reality. A screenwriter can write up these scenes and make the dialogue sound great. Actors can nail the performance and move the audience. But for people who went to a small high school, it's always going to be a little jarring seeing a movie that screams authenticity in some areas while fudging the realism in others.

Some details of The Half of It, I buy. Frustration at the lack of LGBTQ acceptance in a small conservative town? Sure. I get that. That I actually saw in high school. Students being set on paths they don't want to follow by the heavy expectations of parents and peers? That's real too. Getting drunk and playing Settlers of Catan? You betcha (though maybe more in college).

And don't get me wrong. The lack of reality made for a great movie I loved. The Half of It absolutely deserves its 96% rating on Rotten Tomatoes. That's why I said if there is a flaw five paragraphs up. My nitpick is absolutely Cinemasins (cinemasins.com) level.

At the core of Wu's story is a story of good people doing good things. And the melting away of cynicism, which again, makes it unrealistic. People become cynics when they experience reality. The more reality you experience, the more cynical you're likely to become. It's why there are so few journalists who walk around with rose-colored glasses.

That's the reason I watch movies, play games, and read books, though, to escape reality. And I was happy to watch the cynicism melt from Wu's characters for 1 hour and 44 minutes. The Half of It is immensely entertaining. And bully for a movie with some actual queer representation.

Print Headline: The Half of It: The life story some of us wanted