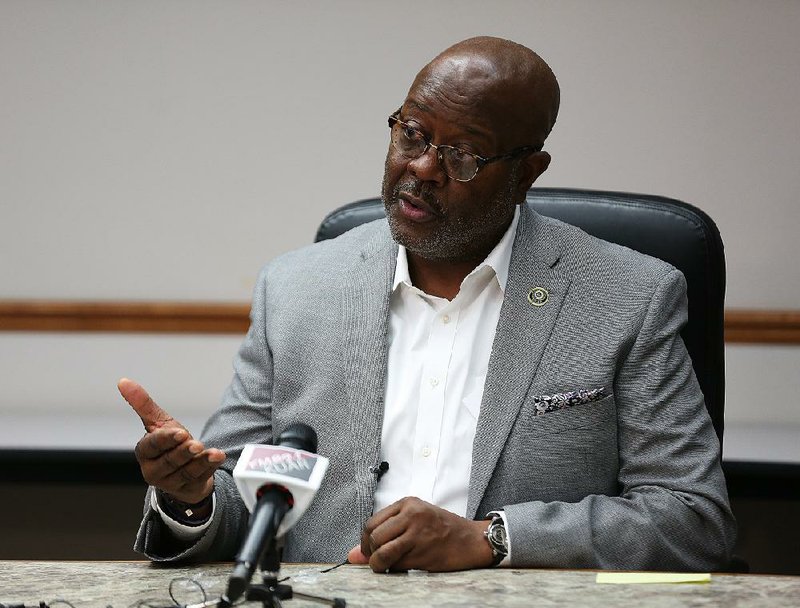 Two Little Rock city directors aired grievances this week about Police Chief Keith Humphrey after several lawsuits were filed against him by members of the department.

The onslaught of lawsuits from all levels of Humphrey's department prompted City Directors Lance Hines and Capi Peck to question the chief's ability to lead the department forward.

Ward 5's Hines said on Wednesday during a show on radio station 102.9 that his "confidence in our police chief is not there."

Conflict between the chief and lower-ranking officers has escalated since Humphrey's decision to fire officer Charles Starks, who fatally shot a suspect in February 2019, Hines said in an interview with the Arkansas Democrat-Gazette. Humphrey's decision was ultimately overturned by a judge, and Starks was reinstated.

Earlier this month, three other officers and a civilian employee also filed suit against the chief, claiming they were denied access to their personnel files after being discipline after a separate internal affairs investigation.

Both Humphrey and Mayor Frank Scott declined to comment on these issues this week, citing pending litigation. Scott tapped Humphrey to lead the department in March 2019; Humphrey is the former Norman, Okla., chief of police.

Hines also mentioned a pair of personal judgments against Humphrey.

The Little Rock chief was sued three times in Oklahoma by two credit institutions, alleging that he had defaulted on more than $40,000 in debts. One of the cases -- seeking $15,870 in repayment -- remains pending, but a judge approved settlements in the other two suits with Humphrey agreeing to repay $16,264 in installments, according to Oklahoma's online court records.

Hines said Humphrey failed to properly disclose one of the debt judgments to the city's human resources department.

"It's been just a trickle of things, and then the news of his financial issues comes to light," Hines said. "And since that time, it looks like the detail that was disclosed to [the human resources department] was only partially correct. I heard that one of the other judgments he got was not disclosed until after the fact."

Hines could not comment directly on the lawsuits from department employees into Humphrey, but he did attest to other officers in the department having problems with Humphrey.

"Really what I'm hearing from our rank-and-file officers -- our sworn officers, the men and women of [the department] -- [is] really what I've been basing my idea on," Hines said. "When I'm hearing some of the things, the dysfunction that's going on, the lack of confidence in command staff, that's an issue."

Peck of Ward 4 also expressed doubts about Humphrey's leadership on Wednesday during a Facebook livestream event. Peck, despite saying it was a personnel issue, voiced her concerns about leadership in the department, which she said she had discussed with the mayor and other city board members.

"I'm just gonna go ahead and say it," Peck said. "I don't have a lot of confidence in the chief. OK, crucify me, whatever. I don't."

Peck also said other city directors were concerned about the lawsuits and other claims against Humphrey.

"Little Rock doesn't need this right now," Peck said. "There's dissension and uneasiness, and I just don't like it, especially at a time like this."

"In my over 20 years of being at the Little Rock Police Department, I don't ever recall a city director saying anything like that publicly," Morgan said.

The Little Rock Black Police Officers Association has defended Humphrey recently, but its leaders couldn't be reached for comment on Friday.

Kathy Webb, Ward 3 city director, said the city directors could not comment on pending litigation. Hines received an email from the city attorney's office advising against such comments, but he insists his opinion on Humphrey has no relation to the issues raised in the email.

"Although, we did get an email from the city attorney advising on pending litigation or personnel matters," Hines said. "My opinion on whether the chief can lead the department has nothing to do with either of those."

Ken Richardson of Ward 2, is concerned the issues with Humphrey are distracting the department from crime.

"I'm probably more concerned and more interested in our Police Department addressing crime in our community, especially particular parts of the city where it seems like we have a disproportionate amount of criminal activity," Richardson said. "I think that's what is important as we try to move our city forward."

Richardson was not familiar enough with lawsuits against Humphrey to comment, but he did say the department needs to do a better job of forming community-police relationships.

"We have a philosophy of 'protect and serve' in certain parts of the city and 'patrol and control' in other parts of the city," Richardson said. "And, to me, that's my biggest concern, and hopefully as a city, that's where we're spending most of our time."