Macron hit with grievances at hospital 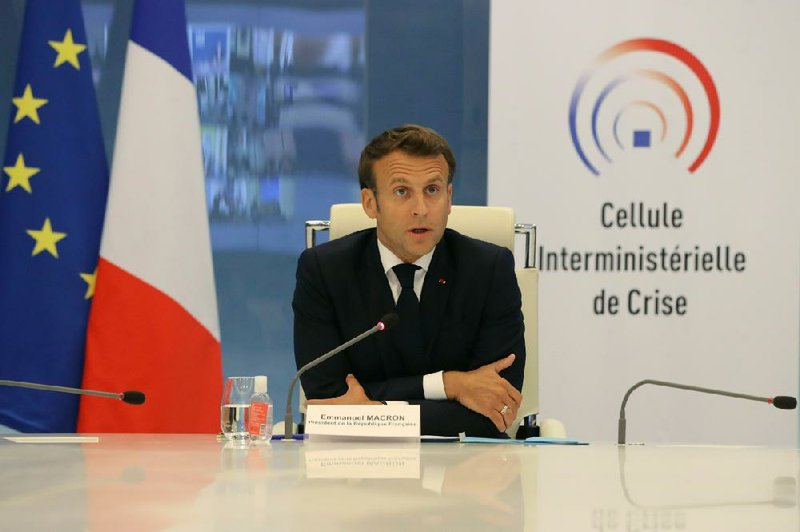 PARIS -- French nurses and doctors faced off with President Emmanuel Macron at a leading Paris hospital Friday, demanding better pay and a rethink of a once-renowned public health system that found itself quickly overwhelmed by tens of thousands of virus patients.

"We are desperate. We no longer believe in you," said a nurse who confronted Macron at the Pitie-Salpetriere Hospital, saying she's using a long-expired surgical mask. "We are the shame of Europe."

"That's not true," the president countered -- but he could barely get a word in as medics peppered him with grievances. Apparently anticipating such tensions and fearing they could further hurt Macron's image, the president's office didn't allow a single video, photo or radio reporter on the visit.

Macron acknowledged mistakes in overhauling the national hospital system, which has faced decades of cost cuts, leaving medical facilities in one of the world's richest countries short of staff, masks and breathing machines needed to fight the virus.

"For months I was asking for equipment, and we had only three days to fight against the virus," Martin Hirsch, head of the Paris hospital network, told Macron. France's infections abruptly multiplied over a short period in March.

As the virus raced across the country and saturated several hospitals, Macron had to deploy the armed forces to build the country's first-ever peacetime field hospital and move patients and doctors around in military transport jets and specially fitted high-speed trains.

Macron's government announced a plan last year to address the growing concerns, and pledged bonuses for medical staff when the virus hit. But the president acknowledged Friday: "We undoubtedly made a mistake in the strategy."

"It was a great strategy, but we should have done it 10 years ago," he told frustrated hospital staff.

Macron promised to launch a new investment plan while the virus crisis is still raging, without offering details. "Trust will only come if we move fast," he said.

Macron then met with unions, who demanded wage hikes to keep nurses from quitting the profession and further worsening staff shortages.

And then, as the president headed for the exit, irate nurses blocked his way.

"That's nice, the bonus ... but what we want is a raise," said the nurse who said she was using an expired mask, who didn't give her name. "For a major European country, this is not normal," said another.

French authorities say more than 27,000 people with the virus have died in hospitals and nursing homes, compared with about 7,000 in neighboring Germany, which tested much more widely than France and entered the crisis with six times as many intensive care beds.

Information for this article was contributed by Sylvie Corbet of The Associated Press.