Become a member of the fan club 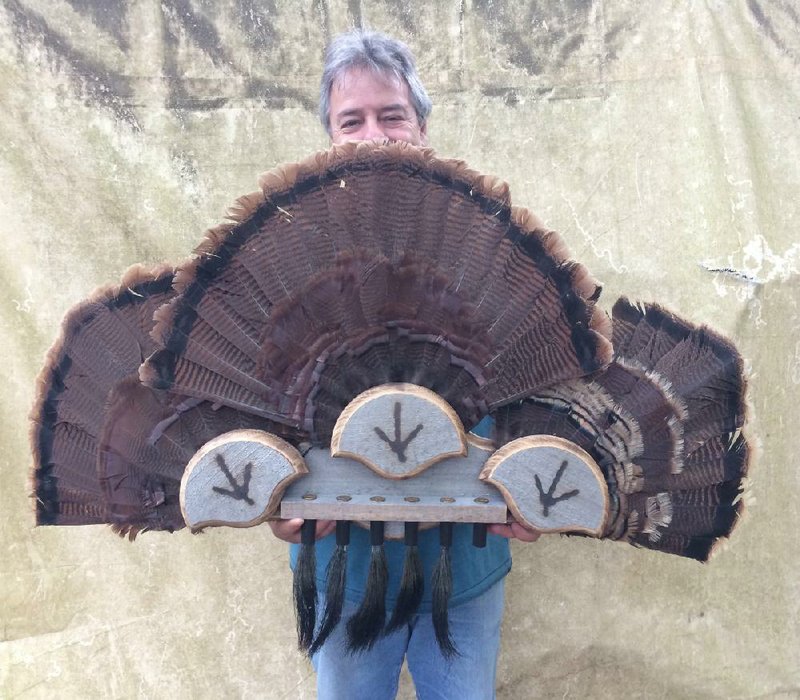 Turkey kits allow for mounting one fan and beard, or multiples. The quality of the mount depends on the care devoted to preparation. (Arkansas Democrat-Gazette)

If you killed a wild turkey this spring, you can memorialize your kill by mounting the fan and beard.

It makes an attractive wall hanging that adds warmth to a room while forever reminding you of a magical day. I have mounted about a dozen fans, including my first, a jake I killed in Roger Mills County, Okla., in 2009. With a jigsaw, my wife cut an outline of Oklahoma from a stave of old barnwood and painted "Oklahoma 1999" on it with red paint.

My favorites are my Rio Grande gobblers because of their buff tips and multi-hued feathers. They look even better when mounted beside the subtle, darker hues of an eastern gobbler's fan.

Mounting a fan is easy with kits you can buy at almost any sporting goods store. The quality of the mount depends on the care you devote to its preparation, beginning at the point of kill. With its tall, wide tail, a gobbler I killed in Marion County on April 27 would have made a magnificent mount, but the bird badly damaged much of its fan while flopping around on the ground. Many hunters killed their gobblers in the rain this season. Wet plumage also makes for a difficult mount because a sodden, bedraggled fan is very hard to coax back into presentable condition.

Ideally, your bird's fan will not be damaged when the bird dies. While leaving the field, avoid snagging the tail on low-hanging limbs and other obstacles that can damage feathers. For the trip home, I stuff the bird headfirst into a deep, narrow backpack, which keeps the plumage immobile and secure.

This is where the hard work starts. A matrix of little muscles is tucked into a honeycomb of recesses in the base of the fan. These muscles enable a turkey to spread its fan and tilt it to the right or left. With a small, sharp pocketknife, cut out every bit of the meat and scrape the recesses as clean as possible. It is not particularly difficult, but it is very tedious.

When the base is clean, spread the fan across a piece of plywood or cardboard. Staple the two outer feathers to the board, but don't press the stapler so hard that it damages the feather shafts. The staplers serve only to prevent the feathers from folding.

With the fan secure, bury the base in borax. Shove a good amount of borax under the base, too. Coat the tip of the beard in borax, as well. Put the fan and beard in a place where pets can't reach them. Every three or four days, remove the caked borax and refresh. This will dry and season the tissue and fix the fan in a permanent open position.

When cured, the fan should be odorless. Tap the borax free and remove residual borax with a toothbrush.

The bottom of the fore plate contains a recess for mounting the beard. Coat the dry, fleshy inner tip of the beard in clear epoxy and slide it into the recess until the fleshy part is not visible. When the epoxy dries, your fan will be ready to mount on the wall. 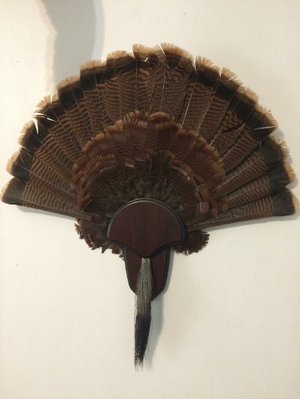 Turkey kits allow for mounting one fan and beard, or multiples. The quality of the mount depends on the care devoted to preparation. (Arkansas Democrat-Gazette) 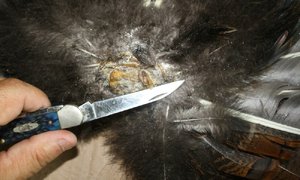 With a pocketknife, remove meat and extraneous material from the fan base. (Arkansas Democrat-Gazette/Bryan Hendricks) 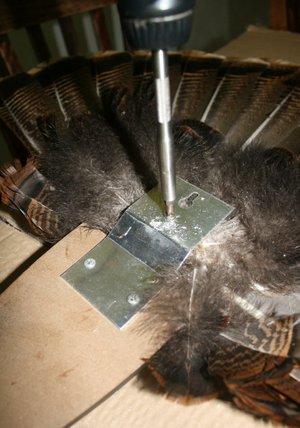 Drill a wood screw through the back of the backing plate and through the fan base to sand- wich the fan. (Arkansas Democrat-Gazette/ Bryan Hendricks) 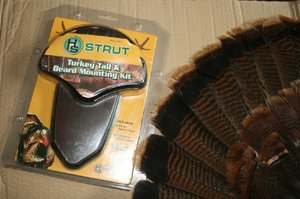 Print Headline: Become a member of the fan club