Coaches operate program to keep kids off the streets 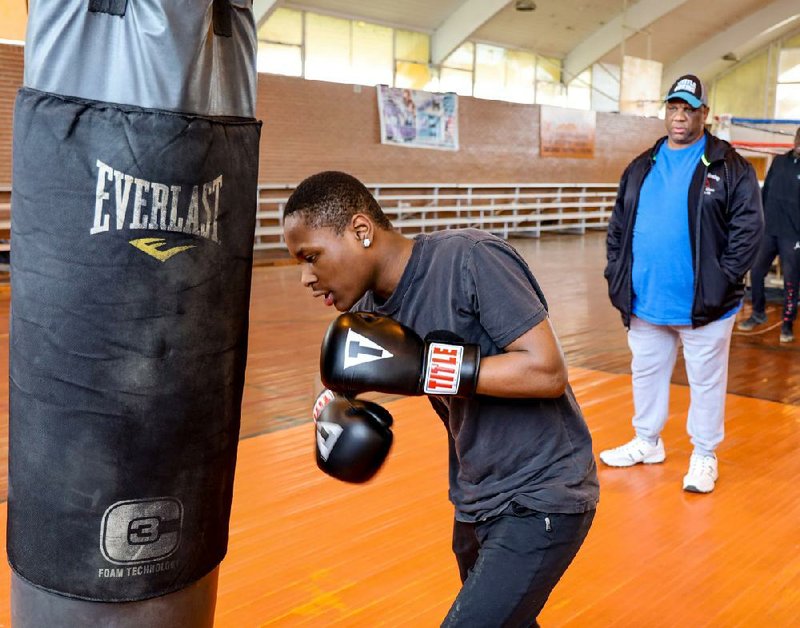 Albert Brewer, founder of Gloves Not Guns, instructs Lee Ventress on the heavy bag. (Special to the Democrat-Gazette/Dwain Hebda)

Every time Albert Brewer holds a practice through the Gloves Not Guns boxing program, he sees the good the club is doing. Before coronavirus put everything on hold, an average of 25 kids showed up for workouts, most of them between the ages of 8 and 13. Every day is not a picnic, but no matter how ragged a practice can go, Brewer is assured of one thing -- if the kids are here they're not out there, in the streets, where trouble lies waiting.

"The reason why I named the team Gloves Not Guns is because the problem with a lot of the kids is, they don't know how to defend themselves, so the first thing they want to grab is a weapon," says Brewer, who founded the original club through a local church in 2013.

"I also tell a lot of kids you have a right to defend yourself, but just because a person talks all this, you don't have to react. That's where self-discipline comes in."

Brewer knows the environments where most of the kids are coming from in Pine Bluff because he spent most of his formative years in them himself, including four years in foster care. This authenticity is, in large measure, what earns his fighters' respect.

"The thing that's so challenging is there's so much distraction out there. Some of them come in with natural talent, but it's hard to keep them focused," he says. "You have some come in here with anger, oh my God. I have to have the patience to deal with him. Or, I may have to suspend him, take something away from him."

"Man, I done been cussed out. But then they always come back and say, 'Coach, I was just in my feelings.' I never force them; if you want to quit, you go ahead. You want to come back, come on back. They know I got general care and concern for them."

Brewer discovered boxing the same way many of his athletes discovered Gloves Not Guns, just looking for something to do. As a kid he joined the Pine Bluff Boxing Club and later boxed in the Army. By the time he returned to Pine Bluff, the boxing club was gone and in its place a reputation for violence and crime the city has yet to shake. For Brewer, it wasn't hard to connect the dots.

"A lot of the kids are not in an organized sport in school because of their grades. They can't make extra-curricular activities there," he says. "So, boxing is an outlet for them."

"A lot of times, when kids hear about the program, they come in, they've got that aggressive nature. Every once in a while, a kid will come in and thinks he can just beat the world and he comes to find out, he ain't as bad as he thinks he is."

Now a 501(c)(3) stand-alone organization, Gloves Not Guns has had its share of success, including last year's Silver Gloves tournament which produced the club's first national champion. Go Forward Pine Bluff, a community revitalization group, has awarded Gloves Not Guns a grant for the work it's doing and the club also stays in the public eye hosting its own boxing tournament. Brewer even leases a house in town dubbed "The Clubhouse" where fighters bond, prepare for matches or just retreat to when life gets too heavy.

There's no telling how many kids the program has saved, but Brewer can recall every one of the ones that slipped away, despite the organization's best efforts.

"I got a kid now who just turned 18 last week; he's been in juvenile since he was 14. One of the best boxers I ever had," Brewer says, head shaking. "They just marched him across the street [to adult lock up]. Gun violence."

Gloves Not Guns attracts both sexes, something Brewer was unprepared for in the early days. "Totally different," he says. "I had never worked with girls and it's been a challenge." So, he recruited some help from Charday Early, another Pine Bluff product who as a female fighter in the 1970s was a pioneer in Arkansas boxing history.

"Kids [today] can get into everything," she says. "Back in the day when I was growing up, we weren't really into drugs and alcohol. Our outlet was hanging out in the neighborhood, playing basketball, just staying out of trouble. The kids now don't have enough outlets and activities for them in the area. They're just not being funded the way they should be funded." 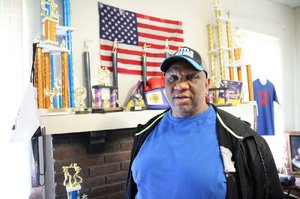 Albert Brewer founded Pine Bluff’s boxing program, Gloves Not Guns, in 2013 to get kids off the streets and into a healthy environment. (Special to the Democrat-Gazette/Dwain Hebda)

"I tell them nothing is given to you. You've got to work for it," she says. "You've got to put your heart and soul into whatever you're doing when you're fighting, so when you get out [into society] you're going to challenge yourself to be a better girl or better boy."

"We're just showing them no matter where they come from as far as their challenges, they can still excel and do well. They don't have to resort to guns or stuff like that. They just need one or two persons like myself that believe in the program and believe in these kids, that they can make it out and make a better life for themselves."