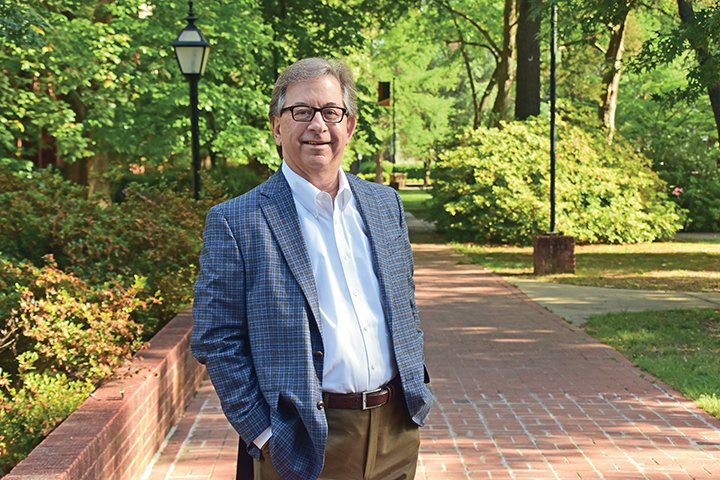 Ellis Arnold was officially announced as the 12th president of Hendrix College in Conway on Dec. 31. He replaces former Hendrix College president and professor Bill Tsutsui, who retired in December. ( Staci Vandagriff)

“I think probably the things that drew me here as an undergraduate were its relationship with the Methodist church and the college’s outstanding academics with a close-knit community of leaders,” Arnold said. “These are pretty much the same elements that resonate with me today.”

Arnold was officially announced as the 12th president of Hendrix on Dec. 31. He replaces former Hendrix College president and professor of history Bill Tsutsui, who retired the same month.

Arnold graduated from Hendrix in 1979, from the University of Arkansas at Little Rock William H. Bowen School of Law in 1982 and practiced law in Little Rock from 1982 to 1990. It was then that he was hired by Hendrix to serve as vice president of development and serve on the general counsel for the college. He worked at Hendrix until 1996, when he was named president of Lambuth University in Jackson, Tennessee.

He later returned to Arkansas to serve as president and head of school for Pulaski Academy in Little Rock, from 2004 until 2008, when he returned to Hendrix as executive vice president. In a press release from the college, Albert Braunfish, chair of the Hendrix Board of Trustees, said Hendrix is very fortunate to have strong campus leaders “who are committed to our students and to the college’s success.”

“Ellis is a proven leader, and we are confident in his ability to lead a seamless transition and develop a comprehensive strategy to guide Hendrix moving forward,” Braunfish said. “Most importantly, we know that Ellis will inspire the Hendrix community and even further advance our well-earned reputation and historic traditions.”

Braunfish has known Ellis for more than 20 years through their mutual affiliation with Hendrix. In an interview via email, Braunfish said Arnold is “the type of person you can count on 100 percent of the time.”

“He is loyal to his family, friends and the institutions that he loves,” Braunfish said. “When he sees a challenge, he is the first to roll up his sleeves and jump in to meet the need.”

Braunfish said Arnold is the right president for Hendrix during these turbulent times in higher education.

“He probably knows the institution as well or better than any of his predecessors, having been a student, a key member of the leadership team and a past interim president,” Braunfish said. “This gives him an amazing grasp of the key issues, as well as deep relationships across all stakeholders.”

Arnold said that in previous years, he has served as acting president, most recently for about 18 months in 2013-14, as a result of former presidents leaving for health reasons or sabbaticals. Arnold said the Hendrix board decided to promote within to keep the momentum going forward, rather than do another search for president.

“Ellis has been a member of the leadership team for many years and was a past interim president of the college, so he knew immediately what needed to be done,” Braunfish said. “There was no learning curve, no adjustment period, and no one in the community needed time to get to know him.

“He just got down to business on day 1 and led the charge.”

Terri Bonebright, executive vice president for Academic Affairs and provost, said Arnold has shown that he truly is a leader who understands that “we make the best decisions when we collaborate with each other to tackle issues.”

“I know that he will continue to do a great job leading the Hendrix community,” Bonebright said. “Ellis is thoughtful, kind, diligent, intelligent and always has the best interests of the college in mind.”

Arnold said one of his priorities is to find ways to enhance and amplify the school’s Odyssey Program, as well focus on enrollment at Hendrix.

“We have also had tremendous success in advancing the $110 Million Campaign, and sometime during this calendar year, we are going to share some exciting news about it,” Arnold said.

The campaign raises money for the college’s Dawkins Welcome Center and the new Miller Creative Quad building. Arnold said that, just as important, he wants to increase the school’s endowment fund and encourage families “to include us in their estates.”

“We are trying to be respectful of our alumni and donors, and we are taking a pause on donations during this time,” he said. “The priority of the college is the scholarships for our students and the Odyssey Program through endowments and things of that nature.

Arnold said he had never really planned on working in higher education. Instead, ever since he was 12 years old, he wanted to be an attorney.

“I wasn’t looking to leave private practice until Joey Hatcher, president of Hendrix at the time, called me with the possibility of coming to work here,” Arnold said. “That was my first introduction to the thought of working in higher ed.

“Ultimately, I accepted his offer, and within less than a year, I had a passion for education that I simply didn’t know existed until I had that opportunity.”

Arnold’s mom was an English major, and his dad was an engineer, but Arnold said becoming a lawyer was something he was always passionate about.

“I think I enjoyed the things that were related to being a trial attorney, including building cases, making arguments and problem-solving,” he said. “It just seemed like a natural fit and something that I never really wavered from throughout junior high and high school.

“I enjoyed it up until the day I left.”

He said that in some ways, his journey is a prime example of what a liberal arts education can prepare one to do.

Before leaving the practice of law in 1990, Arnold had started a law firm in Little Rock, now known as Lax, Vaughan, Fortson, Rowe & Threet. Arnold’s main partners were Mike Lax and Tommy Vaughan, and he jokingly said that once he left, “They shed themselves of me and began to soar thereafter.”

Arnold said the transition to become president has been pretty smooth.

“Everybody’s leadership style is different, but I think I am very collaborative,” he said. “I ask a lot of questions, and I probe a lot to find out different sides and issues.

“Hopefully, based on all that, we can make the best decisions.”

Braunfish said Arnold has a demeanor that “is just right for times of crisis like the one we all face today.”

“He brings calm and collaborative leadership that in turn brings out the best in people to solve problems and execute [solutions] in challenging times,” Braunfish said.

The school closed its dorms March 16 because of COVID-19, assisting the almost 1,120 students to transition out of the residence halls. He said there are still about 45 students on campus who didn’t have a place to return home during this time.

“I can’t say enough positive things about how wonderful our faculty and staff were in adapting their courses and remote teaching,” Arnold said. “The classes at Hendrix tend to be small and very interactive, so this is the kind of learning that our students are accustomed to.

“This is not the way we envisioned delivering Hendrix education, but our students, staff and faculty have adapted well in trying to make the most of it.”

Bonebright said Arnold has been terrific during the COVID-19 crisis.

“He is calm, clear-headed and realistic about our challenges, while also looking forward with a positive attitude,” Bonebright said.

Arnold said the college has created a Web page, www.hendrix.edu/coronavirus, to try to be as supportive as possible. He said this is “an extraordinary time and circumstances.”

“We are still trying to present a quality education,” Arnold said. “Obviously, it is not the same, but we want to support these students with a variety of resources.”