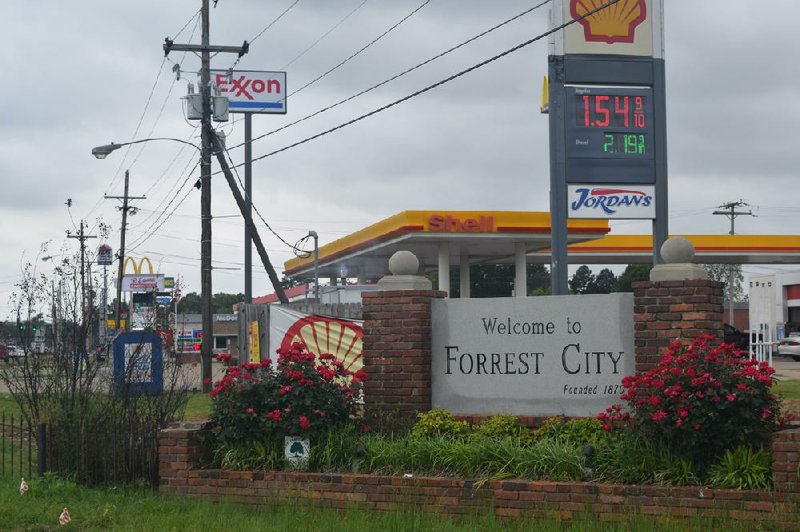 A coronavirus outbreak in the Forrest City federal prison has created a sense of unease in the nearby community. (Arkansas Democrat-Gazette/Joe Flaherty)

FORREST CITY -- A widespread coronavirus outbreak in the Forrest City federal prison has put residents on edge, according to officials.

More than 330 inmates at the prison have tested positive for the virus along with at least 17 staff members, according to the Arkansas Department of Health. Last week, the surrounding St. Francis County recorded an uptick in positive cases, a troubling sign that the virus is spreading in the community.

The hundreds of positive cases nearby has taken a mental toll, Forrest City Mayor Cedric Williams told the Arkansas Democrat-Gazette, even if the outbreak within the prison walls doesn't bring the "devastating physical effect as if those numbers were actually out into our community."

"You see those numbers, and it has an effect on members of the community," Williams said.

Low-, medium- and minimum-security units in the federal prison house approximately 3,156 inmates, according to the Federal Bureau of Prisons.

The prison is an important part of the area economy, Williams said, and draws workers who reside in St. Francis, Lee, and Crittenden counties in eastern Arkansas, as well as people from Memphis who do business with the prison.

Last weekend, teams from the University of Arkansas for Medical Sciences and the Arkansas Department of Health visited Forrest City and tested residents at the civic center. The Health Department tested people associated with the federal prison, such as family members of employees, and the UAMS mobile unit tested anyone.

According to Health Department spokeswoman Danyelle McNeill, the department was scheduled to visit Forrest City's civic center again Saturday. Officials planned to test everyone, not just those with a close connection to the prison, she said.

The Health Department announced Tuesday a recent uptick in coronavirus cases in the community after 27 people outside the prison tested positive in St. Francis County.

At his news briefing that day, Gov. Asa Hutchinson called the increase "worrisome." In light of the documented spread in Forrest City, Health Department Secretary Nate Smith said, "This is a community I'm concerned about."

"We have not just the [federal prison]with the inmates, but we also have workers there, many of whom have not yet been tested," Smith continued. "And I would encourage those who work at the [prison] there to get tested, either by their private physicians or at one of these community testing events."

Gary Hughes, county judge of St. Francis County, said May 8 that while the number of positive cases in the prison was "alarming," the virus did not seem to have spilled over into the community much.

"Up to this point it does not appear that it's created a problem for our community," he said.

But in a follow-up interview Friday, Hughes admitted things had changed. With the increased cases in the community came news of outbreaks among employees at two Forrest City businesses: Belleville Boot Co., which manufactures boots for the military, and Boar's Head, a meat-processing plant.

"Certainly, it's a concern," Hughes said, adding that he hoped the additional testing Saturday would "be good for us."

In one encouraging sign, on Thursday and Friday, there were only 12 new community cases recorded in St. Francis County, according to Smith.

Other prisons in Arkansas experiencing coronavirus outbreaks include the Cummins Unit, a state prison in Lincoln County with at least 900 positive cases among inmates and 60 among staff members. Eight inmates with the virus at that prison have died. Additionally, the Randall L. Williams Unit in Pine Bluff reported that 54 inmates had tested positive as of Friday along with eight staff members.

"Some of them are friends of mine, you know?" Murdock said Tuesday. "So I just want to check in and see that they're doing OK through this."

On April 1, Murdock became the first Arkansas lawmaker to test positive for the virus that causes the covid-19 disease but has since recovered after experiencing only mild symptoms.

Even as the state begins to reopen the economy, for the general public the mental side of the crisis weighs "very, very heavy on most people," he said.

Williams indicated that the cases in prison may mean Forrest City opens up more slowly than other areas of the state as Hutchinson and health officials move through planned phases of reopening.

Williams said he plans to "take a delayed approach" when it comes to reopening the city facilities he can control, such as parks and the multipurpose complex. Gyms and fitness centers were allowed to reopen May 4 with a few restrictions, but the mayor said he waited to open the one in the city's multipurpose complex.

"I just want to see how things are happening in our community as we're able to open the things that I am able to control from a city standpoint," Williams said.

Rodney Franklin, the manager at the Waffle House in Forrest City, was behind the counter Thursday morning. The Waffle House and other restaurants in Arkansas reopened for dine-in service Monday, but the restaurant was nearly empty aside from employees.

Franklin, 60, did not know how many positive cases were in the prison, but anytime someone gets the virus is cause for concern, he said.

"If it was across the street, it would concern me. If it was here," Franklin said, referring to the restaurant, "it would definitely concern me."

Franklin, who lives in Forrest City, said he has avoided moving around a lot.

John Wilson was leaving the Walmart wearing his mask Thursday after grocery shopping for his mother. The situation in the prison worries him, he said, but he added that when it comes to the coronavirus people can't do anything except pray.

Wilson, 65, is a resident of Haynes, a Lee County town about 7 miles south of the federal prison. Lately, he said he only goes out to get groceries. He is retired, and as a result does not have to leave to go to work.

Because employees in the federal prison spend time around the inmates, people in the area are hoping the virus does not get out into the community, Wilson said.

"Anytime you're battling something that's unseen, then it is a scary thing," Wilson said. 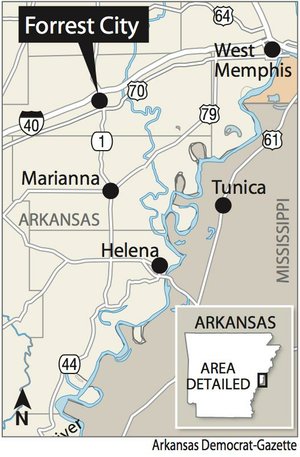 A map showing the location of Forrest City.