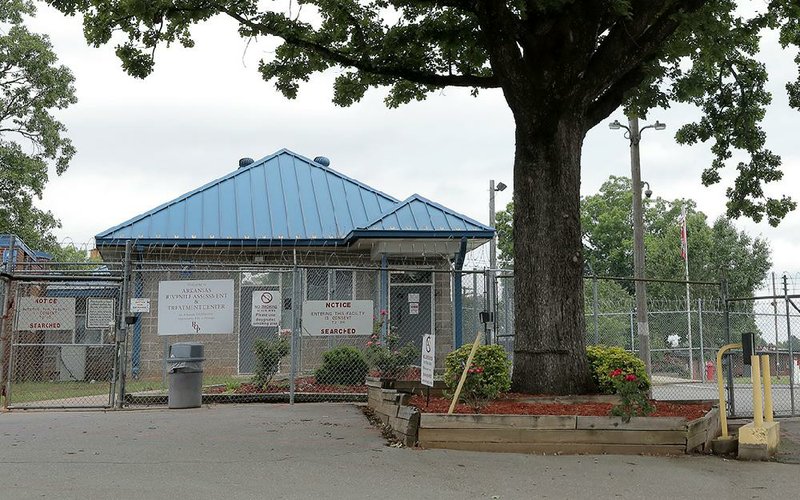 The Arkansas Juvenile Assessment and Treatment Center at Alexander has 224 cameras. Officials plan to add cameras from closed facilities, but the cameras have yet to be installed, a spokesman for the Arkansas Department of Human Services said. (Arkansas Democrat-Gazette/John Sykes Jr.)

A teenager at a state youth lockup in Alexander told investigators last month that staff members were picking on him and, as the situation escalated, they shoved him to the ground.

The incident occurred outside the view of video cameras at the Arkansas Juvenile Assessment and Treatment Center.

The teenager's allegation was outlined in an April 28 email from juvenile ombudsman Brooke Digby to the Arkansas Department of Human Services staff.

Now the department is working to reposition some cameras at the Alexander site and may add more, said Amy Webb, a spokeswoman for the state agency, in an email last week to the Arkansas Democrat-Gazette.

Lack of video evidence is a fairly common problem at Arkansas' facilities for juvenile offenders, representatives from Disability Rights Arkansas said in an interview.

Incidents often occur in "blind spots" beyond a camera's view, or recordings are deleted too quickly for the group to access them.

When the state investigated the teen's complaint, "nothing improper was substantiated," Webb said.

Cameras "have been an ongoing ... need" at facilities like the Alexander one, said Reagan Stanford of Disability Rights, a group federally mandated to monitor the treatment of people with disabilities.

"That's the only way to keep the kids safe, is to have proof of what happened."

Emails that the newspaper obtained through an open records request say no video was recorded of the alleged shoving incident outside Alexander's Ram Hall.

"He [the teen] said he was already in a bad mood and the staff started picking on him, and then it got physical," a Division of Youth Services staffer wrote in an April 28 email to Digby. "They started pushing him, so he pushed back. He said eventually they pinned him on the ground."

The resident was dealing with the anniversary of the day he witnessed his father kill his brother, according to a Digby email. A therapist later arrived to speak with him.

The Alexander facility has 224 cameras. The department decided several months ago to add cameras from now-closed facilities at Colt and Dermott, but none have been installed, said Marci Manley, another spokeswoman for the Department of Human Services, which oversees youth offender facilities. There were formerly two facilities at Dermott, and one remains open.

The Alexander site is the state's largest youth lockup, with about 106 residents as of Friday.

Investigators and members of the information technology team are identifying what needs to be added, where camera angles need to be adjusted and whether additional equipment is necessary, Manley said.

"We want to do everything we can to address blind spots, but there is no way to have 100 percent coverage," she said in an email.

Mike Cantrell, executive director for Rite of Passage -- the Nevada-based firm contracted to manage the Alexander lockup -- said that while there have been a few incidents at the facility that occur outside cameras' views, he wouldn't say there have been "a lot." He added that his group is working with the department to plan fresh camera placement.

The group also has been in talks with the state to add livestream camera views at the Alexander lockup, and possibly at the state's other three sites -- in Dermott, Harrisburg and Mansfield. Rite of Passage is to take over management of these facilities in July. A Lewisville facility is set to close.

"Safety and security is just one part of our collaboration, and we look forward to making sure that these facilities are as safe as they can be," Cantrell said.

Video evidence is particularly important for Disability Rights because concerns over spread of the coronavirus have largely prevented its staff from visiting in person, said Kris Stewart, a staff member.

The lack of in-person visits has also resulted in fewer tips being reported about incidents. Many of the cases Disability Rights investigates come from face-to-face conversations with kids, Stanford said.

Stewart said when she's investigating an incident at a youth facility, she often goes to the facility to get a better sense of the geography of the place -- to match verbal and written descriptions of events with locations.

"You don't have a visual at all now if there's no video," Stewart said.