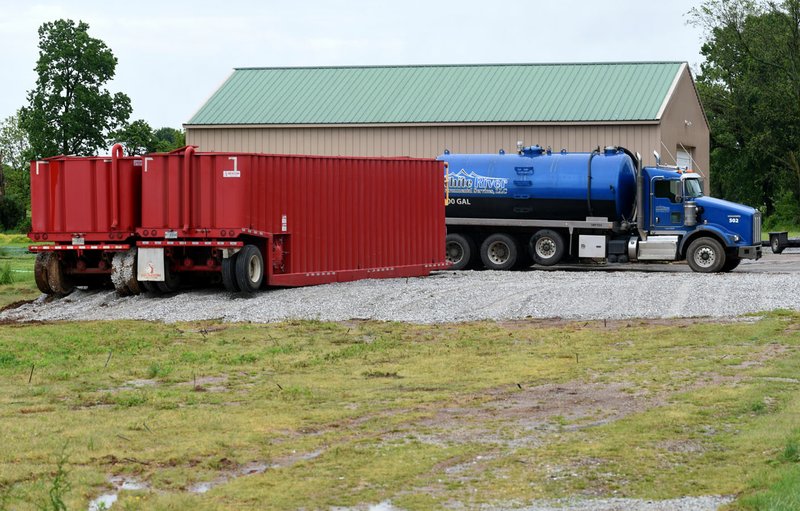 BETHEL HEIGHTS -- The city has an opportunity to fund a permanent solution to its wastewater woes, but it's going to require raising sewer rates 66%.

The Arkansas Natural Resources Commission has approved $11.6 million in a low interest loan to help the city build a sewage pumping station and a 14-mile pipeline to connect with the wastewater treatment plant of the Northwest Arkansas Conservation Authority in south Bentonville.

The terms of the loan include a rate increase to repay the loan and for operation and maintenance of the city's current wastewater system, said Amy Lyman, a spokeswoman for the state's Department of Agriculture. The city must put the new rates in place before the loan closes.

The loan package to the city includes $10.5 million from the Arkansas Clean Water State Revolving Loan Fund Program for construction of the station and pipeline. Another $1.1 million from the same fund will pay the city's connection fee to the conservation authority's plant.

The city will not have to pay back the $1.1 million principal if it completes the project and meets all of the fund program requirements, Lyman noted.

The city's loan application estimated the cost of the construction at $12.6 million.

The loan's terms were estimated for 30 years, with a 1.5% interest rate per year, according to a May 7 letter to the city from Debra Dickson, program fiscal manager for the Natural Resources Division of the state Agriculture Department.

Both the flat rate and the usage rate will rise by 66%.

Only residential customers face the increase set by the Resources Commission, Lyman said.

Customers could face further rate increases to pay for repairs to the city's existing treatment system, said Anna Thrash, another spokeswoman for the Agriculture Department.

The sewer rates must be high enough to ensure the city can make the loan payments and support the additional operation and maintenance of the current system until the proposed system is completed, she said.

Bethel Heights officials also propose an alternative rate structure including increases to commercial and industrial customers and modifications to the residential rates, Lyman said. The city can request additional funding if actual costs exceed the amount proposed, she said.

The wastewater treatment system in Bethel Heights serves 658 residential customers, eight commercial customers and no industrial accounts, according to the city's loan application.

"No," David Griffin said when he saw the proposed rate increases. The Bethel Heights resident said his home's connection with the city's system often overflows in his yard, and his dealings with city staff have been neither positive nor successful.

"I'm not getting what I'm paying for now," Griffin said. "I deserve better than that."

Joe Keyser, another resident, noted the rate increases might be a struggle for families affected by the economic shutdown in response to the covid-19.

The Resources Commission requested the city accept the loan by 3 p.m. Tuesday, so commissioners could vote on approval at their meeting Wednesday.

The next Bethel Heights City Council meeting is set for 7 p.m. Tuesday, four hours after the deadline. Mayor Cynthia Black and Robert Rhoads, an attorney hired by the city, didn't respond to phone messages and emails last week asking if a special council meeting is planned and seeking comment about the loan offer.

City Clerk Amanda Fenton said Thursday she had not heard any plans for a special meeting.

The Arkansas Department of Environmental Quality has monitored the Bethel Heights wastewater treatment plant since a February 2019 complaint about wastewater flooding into the yards of neighboring houses. Inspections by the agency have found numerous incidents of the plant operating out of compliance with its state permit.

The city has received sanctions, including orders to close its current treatment system. Monday is the deadline for the city to submit a plan for closing, according to an agreement signed by city and state officials in November.

The city hired Hawkins-Weir Engineers in November to develop a plan to treat the city's wastewater until the connection to the conservation authority is completed. The plan listed a completion date of May 2023 for the pumping station and pipeline. Improvements to keep the current system in service for three years should be completed by August, according to the plan.

No cost estimates for the either project were provided in the plan.

The resources commission will disperse money -- probably monthly -- to the city based on work completed and costs incurred, Thrash said.

The city will need to continue hauling away wastewater for treatment elsewhere until its facilities -- old or new -- are able to get all its wastewater treated, Environmental Quality has said.

The commission rejected the city's first loan request in April, according to commission documents. The city asked for money to pay for hauling wastewater away from the plant until it could build the infrastructure to connect to the Bentonville facility.

The Clean Water loans apply to permanent solutions, commission staff said. The city sent a new application on April 30 for a pump station and pipe, and it was approved.

A city report to Environmental Quality said it pumped 605,00 gallons of excess wastewater from its plant between April 7 and May 5. The water was taken to the Conservation Authority and a wastewater treatment plant in Huntsville. The city was billed $54,547 for this service.

Bethel Heights operates a STEP system, which partially treats wastewater from its customers. After removal of solids, the system releases partially treated water underground in a drip irrigation system, relying on the underground soil to complete the purification process.

The city operates two drip fields and neither stays within the boundaries of the city's permit, according to the Environmental Quality department.

The city's 2015 permit will expire in August, and the city will have to apply for a new one.

Environmental Quality in August fined the city $101,000 on nine counts of operating its wastewater treatment plants outside of c0mpliance, failing to report test results and falsifying reports.

Any pooling of wastewater above ground is a violation of the city's 2015 permit, Jacob Harper, media and communications manager for the department, said in October.

The department forgave 80% of those fines in November after city officials signed an agreement to continue repairs and renovation of its treatment system until they are operating in compliance with state law. City officials also agreed to eventually closing its current system. The city hired engineers to develop plans for closing the plant, but also upgrade the current system and operate it while the new infrastructure was built.

The state in March filed a complaint in Benton County Circuit Court asking the city to pay the suspended $81,200 in fines, plus attorney fees, for not following the conditions set in the October agreement. The state's complaint also requested a court order for Bethel Heights to take all necessary steps to stop wastewater from pooling on the surface of the city's treatment site.