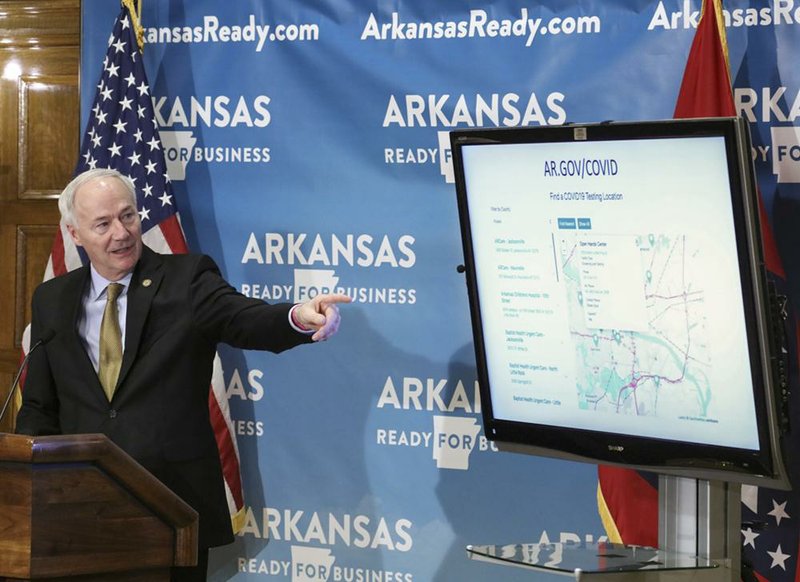 Trump and Pence "appreciate the strong State-Federal partnership with Governor Hutchinson and are looking forward to discussing ways to continue this close collaboration as the state reopens in a phased, responsible way," a White House official said in a written statement.

Additional topics of conversation include the nation's food supply chain, the safety and health of food supply workers and support for farmers, the White House said.

Hutchinson, a Republican, is one of two governors scheduled to visit the West Wing on Wednesday. The other is Democrat Laura Kelly of Kansas.

In a written statement, Hutchinson said he looked forward to Wednesday's discussions.

"President Trump and Vice President Pence have been in constant communication with the governors throughout this pandemic and I appreciate the federal support and partnership with the states. I'm delighted to share the effective work of our meat processors in protecting the food supply chain and the steps we are taking to get Arkansans back to work and ready for business," the governor said.

Tyson Foods, based in Springdale, produces roughly one-fifth of the nation's poultry, pork and beef.

Covid-19 outbreaks have disrupted some of the nation's processing plants for meat and poultry, including several Tyson operations.

Hutchinson is the latest in a line of governors to receive White House invitations as officials try to contain the pandemic and restart the economy.

Others meeting with Trump at the White House this month include Jared Polis, D-Colo., and Doug Burgum, R-N.D., on May 13; Greg Abbott, R-Texas, on May 7 and Kim Reynolds, R-Iowa, on May 6.

Nearly 1.5 million cases of covid-19 have been reported in the U.S. this year, including 4,759 in Arkansas, according to figures posted by the Arkansas Department of Health.

Nationwide more than 89,000 deaths have been linked to the virus, including 98 in Arkansas, the Health Department reported. Sunday, a White House official emphasized the administration's efforts to assist the state.

"Thanks to President Trump's leadership, Arkansas has received significant federal resources to appropriately respond to and slow the spread of COVID-19. The President will continue to direct this unprecedented level of critical support to ensure the safety and prosperity of Arkansans," the official said.