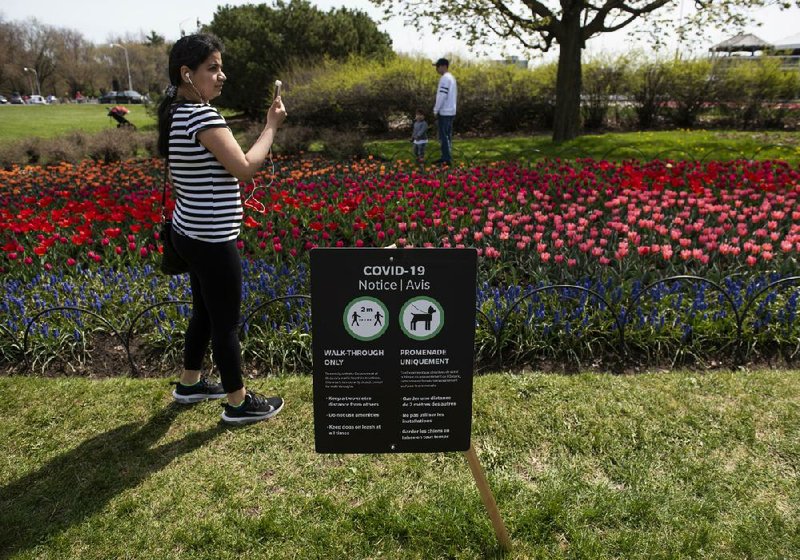 BEIRUT -- Seven members of the Islamic State group escaped from a small prison in northeast Syria on Sunday, with four recaptured and a search continuing for the remaining three, said Syrian state media and an official with the main Kurdish-led U.S.-backed force in the region.

The militants fled from a prison on the edge of the town of Al-Hol, home to a sprawling camp where tens of thousands of Islamic State wives, widows and children live, said state news agency SANA and a spokesman for the Syrian Democratic Forces, Mervan Qamishlo. The prison is separate from the camp.

Kurdish authorities currently operate more than two dozen detention facilities scattered across northeastern Syria, holding about 10,000 Islamic State fighters. Among the detainees are some 2,000 foreigners whose home countries have refused to repatriate them, including about 800 Europeans.

Qamishlo said the Syrian Democratic Forces had caught four escaped inmates and were conducting search operations to find the others. He did not give the nationalities of the militants.

Earlier this month, imprisoned Islamic State members rioted and took control of a prison in the northeastern Syrian town of Hassakeh for several hours, until Kurdish-led authorities negotiated an end to the unrest.

In late March, a two-day riot and takeover of the same prison in Hassakeh allowed four extremists to escape, although they were caught a day later.

Mumin Abdi, the police chief of Galkayo town in Somalia's central Mudug region, told The Associated Press that the bomber rammed a vehicle carrying Ahmed Muse Nur, the governor of Mudug region, killing him and three of his bodyguards outside the regional administration's headquarters.

Somalia's Islamic extremist rebels, al-Shabab, quickly claimed responsibility for the bombing. The group, which is allied to al-Qaida, said it carried out the bombing in an announcement on its radio broadcast.

Nur, a prominent local politician in his 70s, was appointed governor in the middle of last year. He is the second governor killed in recent months in Puntland, a semi-autonomous state in northeastern Somalia. 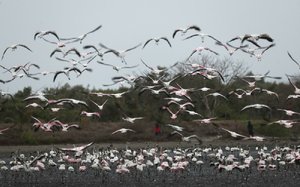 Photo by AP
Flamingos gather at a creek as the sun sets on Sunday in Navi Mumbai, India. (AP/Ra q Maqbool)

The shelling of the facility in the city's Furnaj district late Saturday also wounded at least 17 people, including a 52-year-old Bengali migrant and his 5-year-old child, said Malek Merset, a spokesman for the capital's Field Medicine and Support Center. The man is also the father of the dead child.

It was the latest attack on civilians in the fighting over Tripoli between eastern-based forces under military commander Khalifa Hifter and an array of militias loosely allied with the U.N.-supported but weak government in the capital. The center is part of the Tripoli-based government's Health Ministry.

A fire broke out in parts of the shelter housing people displaced by previous clashes in Tripoli, Merset said.

The center's statement did not say which side was responsible for the shelling. Later Sunday, Tripoli-allied forces accused Hifter forces of committing the attack. There was no immediate comment from Hifter's camp.

The U.N. Office for the Coordination of Humanitarian Affairs in Libya condemned what it called the "repulsive shelling" on a shelter for displaced people, who were forced to leave their homes in Tripoli's Ain Zara district earlier in the fighting.

In a statement, the agency said the overnight raid was carried out in Bahawalpur, a deeply conservative district in Punjab province where outlawed Sunni militants have a strong presence.

It said police seized weapons and bomb-making material, foiling a possible attack, and claimed the slain militants wanted to target places of worship in a minority community. The agency statement provided no further details.

Pakistani security forces in recent years have carried out such raids to capture militants who fled the country's former tribal regions bordering Afghanistan. These areas for years served as safe havens for militants, including the Islamic State-linked Dayesh group, which has been blamed for several militant attacks in the recent past.