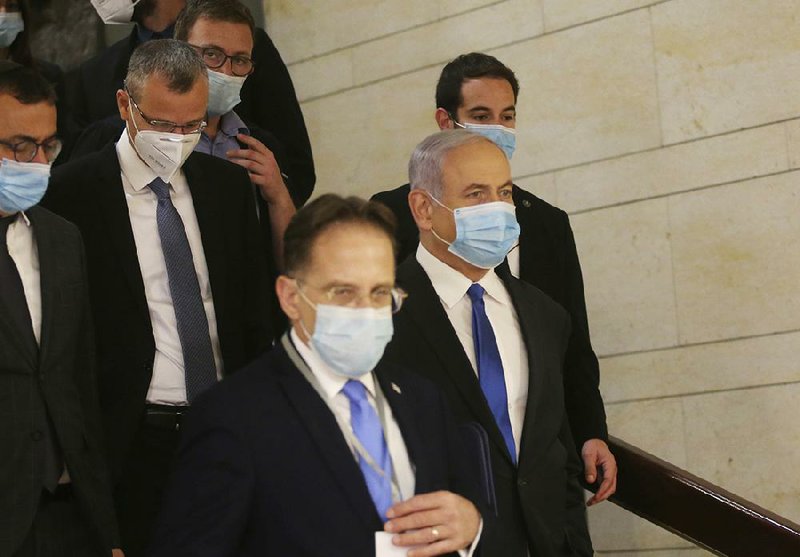 Israeli Prime Minister Benjamin Netanyahu (second from right) makes his way to the swearing-in ceremony for his new government Sunday at the Knesset building in Jerusalem. (AP/Alex Kolomiensky)

JERUSALEM -- After three deadlocked and divisive elections, a year and a half of political paralysis and another three-day delay because of political infighting in his Likud party, Prime Minister Benjamin Netanyahu finally swore in his new government on Sunday.

The Knesset, Israel's parliament, passed a vote of confidence in Netanyahu's new administration to end over 500 days of upheaval.

Over the weekend, both Netanyahu and his rival-turned-partner Benny Gantz announced their appointments for the new government -- the most bloated in Israeli history with an expected 36 Cabinet ministers and 16 deputies.

Netanyahu and Gantz, a former military chief, announced last month that they would be putting their differences aside to join forces to steer the country through the coronavirus crisis and its severe economic fallout.

[Video not showing up above? Click here to watch » https://www.youtube.com/watch?v=zjaMTsJS_rk]

Their controversial power-sharing deal calls for Netanyahu to serve as prime minister for the government's first 18 months before being replaced by Gantz for the next 18 months. Their blocs will also have a similar number of ministers and mutual veto power over most major decisions.

It is an arrangement that has also produced the largest, and perhaps most politically broad, government in Israel's history that might spare Israelis another round of elections for at least three years but could also hamper its ability to function.

Critics have already accused the government of being out of touch by creating so many Cabinet posts at a time when unemployment has soared to 25% as a result of the coronavirus pandemic. But because Netanyahu's bloc includes several smaller parties, he still has only a limited number of Cabinet ministries to hand out to the Likud rank and file.

A mini-insurgency by angry senior Likud members forced Netanyahu on Thursday to seek a delay in the swearing-in ceremony. To mollify his backbenchers, Netanyahu created a series of new ministries with questionable responsibilities, such as "community development," "settlement affairs" and "higher education and water resources" and a minister to be the liaison between the parliament and the Cabinet. Each ministry means paying for drivers, staff and office space.

"Benny, we worked well together during Operation Protective Edge, me as prime minister, you as chief of staff and I am sure we will work well together in this new government serving all of Israel's citizens," said Netanyahu, referring to the 2014 war Israel fought with Hamas in Gaza. Gantz was military chief of staff at the time.

Netanyahu said it was an important day for Israel that would prevent another round of costly elections and establish a unity government to tackle the fallout of the coronavirus crisis.

"Because of the pandemic, we have decided to set our differences aside and fight together shoulder to shoulder against this massive challenge," he said.

Gantz said the new government would end Israel's worst political crisis and "usher in a new era of peace and reconciliation" for Israeli citizens.

"The people told us: Stop fighting between you and start working for us," said Gantz.

Tal Schneider, senior diplomatic and political correspondent for the Israeli business newspaper Globes, said the size of the government and the invention of new cabinet posts was "an insult to the public in such dire economic times."

She also pointed out that the new government could have some serious problems functioning.

"The mutual veto power between Netanyahu and Gantz makes this government highly problematic. Nothing can be done without the agreement of both sides," said Schneider. "Gantz might agree with Netanyahu initially but at a certain point he will have to stand up and show that he is achieving something."

Yair Lapid, the new opposition leader, said the machinations have led to a loss of "trust of the Israeli public."

"The coronavirus is an excuse for a corrupt party at the expense of the taxpayer. After all the empty talk of an 'emergency government,' the government being formed today is the largest and most wasteful in the history of the country," he said. "It's not just the waste, it's the contempt. The complete contempt for the crisis facing the Israeli public."

The deal has already led to the dissolution of Gantz's alliance with Lapid after he reneged on his central campaign promise not to serve under Netanyahu, who has been indicted on corruption charges and faces a criminal trial starting next week. Their much-scrutinized coalition deal could only come about after the country's Supreme Court ruled it had no legal grounds to block it.

Gantz and Netanyahu fought to stalemates in three bitter election campaigns over the past year.

After the most recent vote in March, Gantz appeared to secure enough support in parliament to pass legislation that would have barred the indicted Netanyahu from continuing as prime minister. But in a stunning about face, Gantz agreed to enter a partnership with his arch rival.

Despite the criticism, Gantz argued that teaming with Netanyahu offered the country its only way out of the prolonged stalemate and prevented what would have been a fourth costly election in just over a year.

The coalition will also include a pair of ultra-Orthodox Jewish parties and some other individual defectors. It was voted into office by a 73-46 margin, with one lawmaker in the 120-seat Knesset skipping the vote.

The main point of contention for critics has been the newly created position of "alternate prime minister."

The post, initially held by Gantz, could allow Netanyahu to remain in office even after the swap and throughout his corruption trial and a potential appeals process. There are also deep suspicions about whether Netanyahu will keep his part of the bargain and ultimately cede the premiership to Gantz.

The new position is supposed to enjoy all the trappings of the prime minister, including an official residence and, key for Netanyahu, an exemption from a law that requires public officials who are not prime minister to resign if charged with a crime.

Netanyahu has been indicted on charges of fraud, breach of trust and accepting bribes in a series of scandals involving allegations of favor-trading with wealthy media moguls. He denies any wrongdoing and blames the charges on a media-orchestrated plot to oust him.

Since his indictment last fall he has repeatedly lashed out at the country's legal system as well, with his political allies taking special aim at the high court and accusing it of overreach and political interference. His legal woes and fitness to serve were central issues in the recent election campaigns.

Netanyahu also pledged to push forth with contentious plans to annex parts of the West Bank.

Addressing parliament on Sunday before his Cabinet was sworn in, the prime minister signaled he'd go ahead with a move that is endorsed in the Middle East plan of President Donald Trump's administration but would put Israel on a collision course with Palestinians, who claim the territory for a future state, as well as with many countries around the world.

"The time has come to apply Israeli law to them and write another glorious chapter in Zionist history," Netanyahu said. Opposition lawmakers heckled him as he spoke, calling out "bribery, fraud and breach of trust," the charges he'll face when his trial opens next Sunday.

Repeated electoral stalemates led Netanyahu to double down on his right-wing's dream to annex West Bank settlements, where more than 400,000 Jewish settlers live, in addition to the more than 200,000 who've settled in already-annexed east Jerusalem. The plan has drawn opposition from the European Union, some Gulf Arab states and neighboring Jordan, raising questions as to whether Netanyahu will actually carry it out.

Information for this article was contributed by Aron Heller of The Associated Press, Ruth Eglash of The Washington Post and Amy Teibel of Bloomberg News.