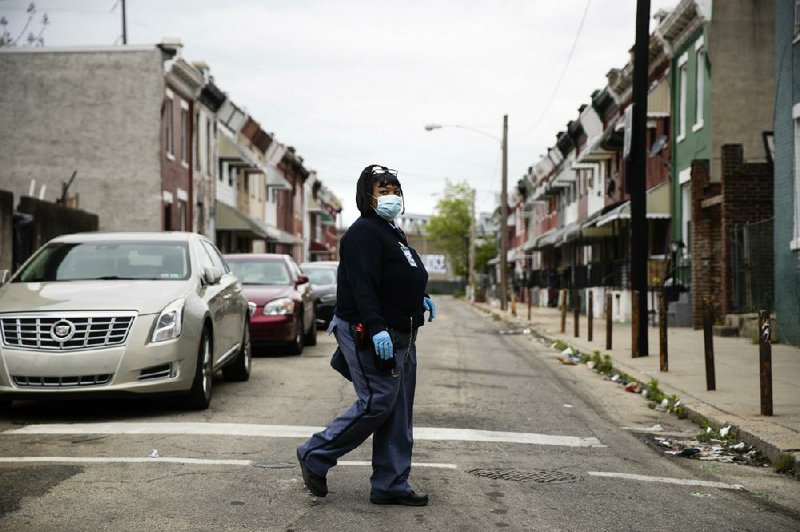 PHILADELPHIA -- For some of the 2,000 or so year-round residents of Deer Isle, Maine, the fraying American flag outside the post office this spring was a reminder of the nation's mood.

The flag was in tatters. It twisted in the wind from a single hook. But it was stuck in the up position, so the postmistress hadn't been able to replace it.

"I was thinking what a metaphor it is for our country right now," community health director Rene Colson Hudson said. "It was really important that the flag be replaced, as a symbol of hope."

Colson Hudson, a former New Jersey pastor, posted an online plea on April 23 that sparked a community thread. Should someone scale the flagpole? Did they need a bucket truck? By week's end, a secret helper had gotten the flag down, and the new one was soon flying high.

[Video not showing up above? Click here to watch » https://www.youtube.com/watch?v=fF8sck5uLgk]

Colson Hudson, 54, had rarely visited her post office when she lived in suburban New Jersey. But in Deer Isle, people exchange small talk in the lobby, announce school events on the bulletin board and pick up medications and mail-in ballots -- while postal workers keep an eye on everyone's well-being.

"Here," she said, "it is the center of community."

Historically, the Postal Service has operated without public funds. It's been around longer than the nation itself.

But Postal Service officials this year -- bracing for steep losses given the coronavirus shutdown -- warn they'll run out of money by September without help. They recently reported a $4.5 billion loss for the quarter ending March 31 -- on $17.8 billion in revenue -- before the full effects of the shutdown sank in.

Some in Congress want to set aside $25 billion from the nearly $3 trillion relief program to keep the mail flowing. But with Treasury Secretary Steven Mnuchin pushing President Donald Trump's priorities, the Postal Service has so far landed just a $10 billion loan.

"The Postal Service is a joke," Trump told reporters last month. "They're handing out packages for Amazon and other internet companies and every time they bring a package, they lose money on it."

He insists that higher package rates could ease the financial troubles. But most financial analysts disagree.

Packages typically account for just 5% of the Postal Service's volume, but 30% of its revenue. And package revenue has actually gone up during the shutdown. Still, it hasn't been enough to restore profitability, battered in the Internet age by the decline of first-class mail.

"There's truly an agenda of this administration to undermine [it] to the point that they're going to sell off the post office to a private corporation," said Mark Dimondstein, president of the American Postal Workers Union, which represents about 200,000 of the 630,000 postal workers.

Earlier this month, its board of directors appointed Republican fundraiser Louis DeJoy to serve as the next postmaster general.

All told, more than 2,000 have tested positive for the coronavirus, the Postal Service said. A union spokesman said 61 have died.

Trump has threatened to block the Postal Service from covid-19 relief funding unless it quadruples the package rates it charges large customers like Amazon, owned by nemesis Jeff Bezos. Bezos also owns The Washington Post, whose coverage rankles Trump.

"He is willing to sacrifice the U.S. Postal Service and its 630,000 employees because of petty vindictiveness and personal retaliation against Jeff Bezos," Rep. Gerry Connolly, D-Va., said last week. "That would be a tragic outcome."

On Henrietta Dixon's mail route in North Philadelphia, every house has a story. Dixon seems to know them all.

Alvin Fields moved back to his block of two-story row homes after 40 years working for Verizon. Jason Saal, 40, lives in an abandoned factory he bought to use as an art studio. Sharae Cunningham is sewing masks for the neighborhood, some with African prints she sells for $6.

Each said they would miss the Postal Service if it collapsed. They agreed the neighborhood, one of Philadelphia's poorest, would benefit from expanded services such as low-fee check cashing and Wi-Fi that might help American post offices survive.

"That'd be a great service. A lot of people need to cash checks," said Cunningham, 40.

Dixon's city route might be attractive to private companies itching to compete with the postal service. But the same 55-cent stamp that takes a letter across town could also get one to the Pacific Northwest, rural Appalachia or islands off the coast of Alaska, California or Maine. That's because of the USPS pledge to offer "universal service" to everyone in the United States, no matter what it takes to reach them.

"It's one of the last places where we are all equal. We all have the right to a 55-cent letter and mail delivery six days a week," said Evan Kalish, 30, of Queens, N.Y., a postal enthusiast who's documented thousands of post office visits on his blog, Postlandia.

Back in Maine, Colson Hudson likes to take the mail boat over to Eagle Island in the summer to visit friends. She once took a picture of the mail bag, musing about who its contents would connect.

"All these people come flocking down at the time the boat comes with the mail," she said. "There's something in that bag that they're waiting for, that they're hoping for."