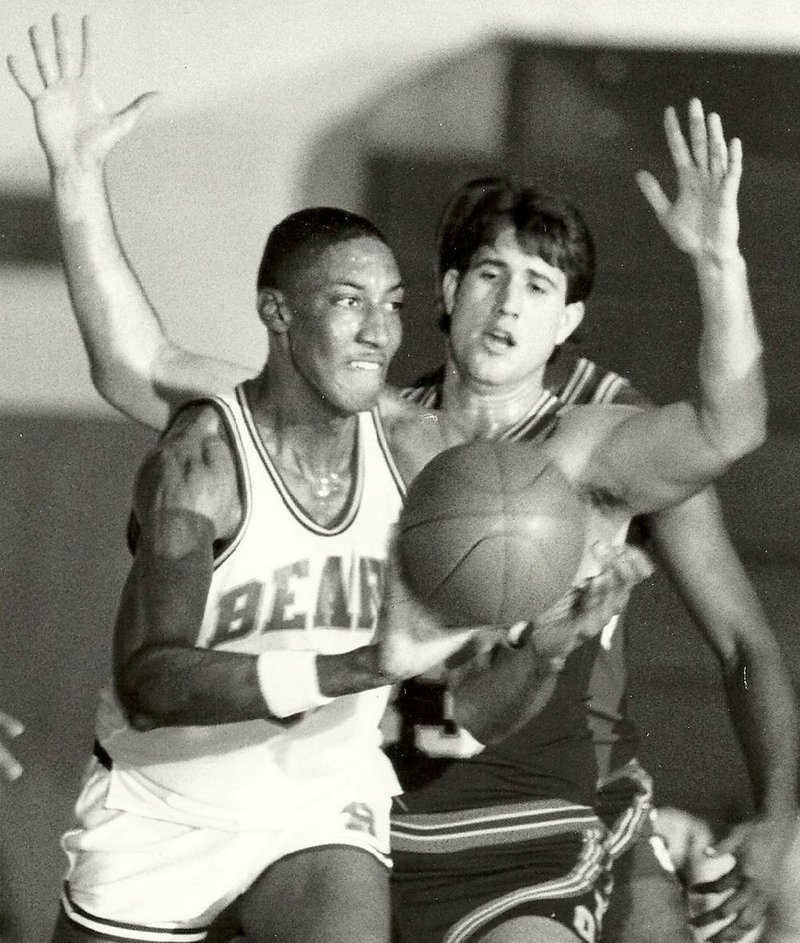 Before his 17-year NBA career, Scottie Pippen was a standout for the University of Central Arkansas from 1983-87, averaging 17.2 points, 8.1 rebounds and 2.7 assists for the Bears. (Arkansas Democrat-Gazette file photo)

Arkansas Democrat-Gazette staff writer Frankie Frisco served as a team manager for the University of Central Arkansas basketball team from 1985-90. The first two of those years was for a Bears team with Scottie Pippen, who later became a six-time world champion with the Chicago Bulls and was named one of the NBA's 50 Greatest Players. Frisco shares team memories today centered around the 1986-87 season, Pippen's last with the Bears.

The story has been told hundreds of times about how Scottie Pippen arrived in Conway from Hamburg, when in 1983 his high school coach Donald Wayne asked UCA Coach Don Dyer to take a look at the 6-1 guard. Dyer, who coached Wayne at Henderson State, had only a not-so-glamorous role as team manager to offer Scottie.

Scottie earned a scholarship, grew 6 inches and became a two-time NAIA All-American for the Bears before embarking on a legendary NBA career.

My UCA career started similarly. My England High School business teacher Quin Melton and I stopped by the Farris Center to see Dyer the day after the Bears were knocked out of the NAIA District 17 Tournament in 1985. Coach Dyer and Mr. Melton had taught together in the early 1960s at England, and Dyer said I could become his team manager in the fall. I didn't drink the same water Scottie did at UCA, and eventually I grew 6 inches around the waist on my way to becoming a sports writer.

I knew plenty about the Bears and Scottie, who was coming off an All-Arkansas Intercollegiate Conference season as a sophomore. The first game of the season was against Philander Smith in the Dunbar Recreational Center in Little Rock. There was so much slipping and sliding on the court that I'm surprised it was completed. We lost 67-65 as a result of some questionable traveling calls, one or two of those being called on Scottie for slipping as he tried to make some plays at the end. After the final buzzer sounded, I followed the team into the small locker room where I watched Scottie give the officials a piece of his mind. I thought to myself, "Uh oh, what did I get myself into?"

The Bears finished 23-6 that season, winning the AIC title with a 17-3 league record. A heartbreaking 55-51 loss in overtime to the University of Arkansas-Monticello kept us from going to the NAIA National Tournament in Kansas City, Mo.

There was no doubt from the start of fall workouts that the 1986-87 season was going to end differently for the Bears. We had Scottie, and good front-line players in Keith Collins, Byron Bland, Mickey Parish and sharp-shooter Gary Beck, who benefited the most that season with the addition of the three-point line. Guards Michael Richardson, Robbie Davis and Pippen's former Hamburg teammate Ronnie Martin added depth, and we got a huge shot in the arm from transfer Jimmy McClain.

A thigh injury kept Scottie out of six games early, including a loss to College of the Ozarks in Clarksville in the fourth AIC game of the season. It was the only regular-season conference loss on the way to a 19-1 league record and another 23-6 overall mark. After the Ozarks loss, our next game was Dec. 13 at Southern Miss to face a Golden Eagles team that won the NIT championship later that season in Madison Square Garden.

Southern Miss boasted 1988 NBA Draft picks Randolph Keys (first round, Cleveland Cavaliers) and Derrick Hamilton (third round, New Jersey Nets). According to a recent story on WLOX.com, Southern Miss Coach M.K. Turk tried to convince the Golden Eagles to take the NAIA Bears seriously, in particular Scottie, who he referred to as an NBA lottery pick in his scouting report.

"We were like, 'OK.' I said, 'Scottie? Lottery pick?!' " Southern Miss guard Casey Fisher told WLOX-TV. "The ball went up, and it was us against him. Back then we didn't keep up with triple-doubles, but I bet he had a quadruple-double. He did everything but mop the floor."

Scottie scored 24 points that night and had a few impressive dunks, but the Bears lost a halftime lead and fell 95-82.

Weeks later, my father had a massive heart attack. Instead of going to Magnolia for our game against Southern Arkansas, I asked Coach Dyer if I could stay near my father at the hospital. He granted permission, and I headed across campus for a 2 p.m. class. Before I arrived, I saw Scottie having a conversation with a couple of coeds and told him he better get to the gym because the team bus was about to leave.

"They're not going to leave me, Frisco, I'm A.A. [All-American]," Scottie said before asking me why I wasn't on the bus.

Later that night, I turned on a transistor radio to listen to the game. The first words I heard from the UCA play-by-play announcer was that there was no sign of Scottie. Then, just before halftime he said, "Ladies and gentlemen, Scottie Pippen is walking into the gymnasium in his street clothes."

You guessed it. Scottie was left in Conway. After the bus left the Farris Center, it went to the athletic dormitory to find him. The team and Scottie were going in opposite directions. A UCA athletic booster eventually drove him to Magnolia in time for the second half, where he led the Bears to a narrow victory.

The Southern Miss game put Scottie on the NBA's radar, and scouts slowly found their way to the Farris Center to see for themselves. By the end of the season, there were more NBA scouts than members of the media on press row, including one from the Boston Celtics, which was Parish and former Clinton teammate Jamie Beavers' favorite NBA team. Instead of participating in layup drills, Parish and Beavers were chatting up the Celtics' scout and wanting him to tell Larry Bird that his two biggest fans were in Conway, Arkansas.

The one thing Scottie and his teammates never did was play in a national tournament. After winning another AIC championship, the Bears faced Harding in the District 17 semifinals in Conway. UCA led 55-53 at halftime, but lost 88-87 when Harding freshman Corey Camper hit a 28-foot three-pointer in front of our bench in the closing seconds. Looking back, it was strange that Harding was on our end of the court in the second half. Even stranger was that we didn't win with Scottie scoring 39 points, pulling down 12 rebounds and handing out 8 assists. 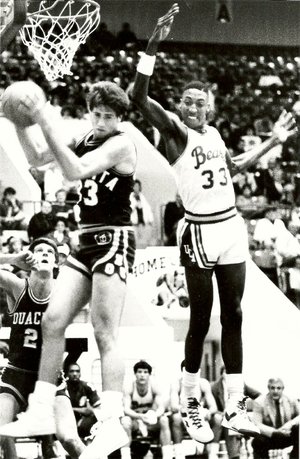 "Good luck in the NBA" was the last thing I said to Scottie afterward. Little did I know that journey would take him to Portsmouth, Va., where he was the MVP of a pre-draft camp, then to Hawaii where he won the slam-dunk contest over many of the top draft prospects.

I was sitting in assistant coach Arch Jones' living room with about 10 others watching the 1987 NBA Draft when we heard Commissioner David Stern announce the fifth pick: "The Seattle SuperSonics select Scott Pippen of Central Arkansas." A few minutes later, we heard the SuperSonics traded Scottie to the Chicago Bulls for their first-round pick, Olden Polynice, and his professional career was on its way.

"I remember when we were freshmen together [in 1983] shooting on a side goal, and he said, 'Watch this,' " Davis said. "He goes up, pins the ball on the rim and falls on his [butt]. Everybody's laughing. Well, that's about the last time I ever remember laughing at him trying to dunk.

"Scottie, all throughout, has always treated me the same just like he did in 1983. He was destined to be a basketball player because as he grew [from his freshman through junior years], he got better and better. It's truly one of the all-time great stories in sports."

I saw Scottie a couple of times before he won six world championships with the Bulls. He came back to UCA to play some pickup games before training camp opened during his rookie season. UCA freshman Jeff Harmon got an introduction to Scottie during one of those games, grabbing the future Bull on a breakaway attempt, then finding the word Mikasa tattooed on his forehead from Scottie's accurately thrown basketball.

At UCA, Scottie drove an old dusty green car, probably something like a 1982 Datsun B210, but definitely a lemon. Once after practice, he asked if I wanted a ride to the cafeteria. I told him, "No thanks, I want to make sure I get there before it closes, so I'll just walk." After he signed his first contract, I followed either a Mercedes or BMW with an Illinois vanity plate that read "MR PIP 33" into the Farris Center parking lot one day. He had made it big time.

He came back to UCA through the years for his graduation, to have his number retired and other small gatherings I was fortunate enough to attend. I wasn't able to get to Chicago on Dec. 9, 2005, when the Bulls retired his jersey. Fortunately, Coach Dyer was on the United Center floor along with several former Bulls, including some guy named Michael Jordan.

I have reminisced during each episode of The Last Dance, remembering Scottie's path from UCA to Chicago. The path had a few twists and turns to get to where we are today, but go to YouTube and listen to the tributes bestowed upon him by some of the game's greatest such as Jordan, Coach Phil Jackson and Charles Barkley on that night 141/2 years ago. The tributes were real and genuine.

That's how I always think of Scottie: Real and genuine.