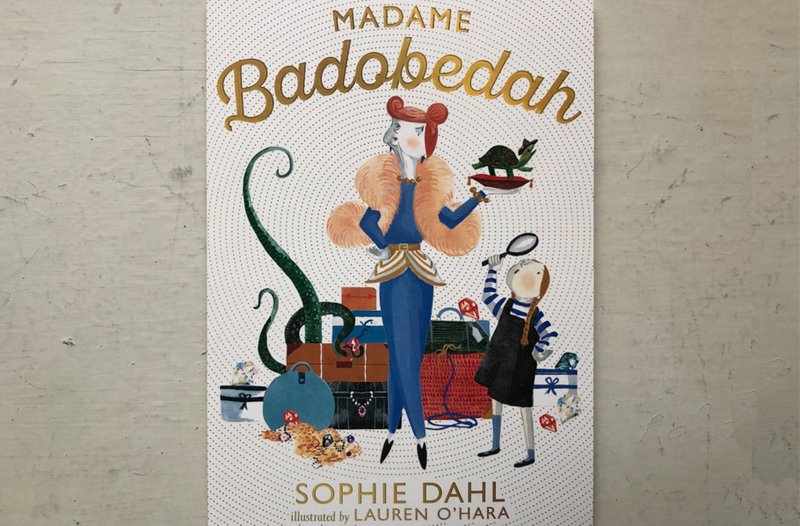 STORY: Independent little Mabel lives in a hotel, the Mermaid Hotel. Its back door leads to the sea, "along a path of old-men trees, battered and bent by wind and salt." Along the path, "rock thyme twines with thistles that spike your feet if you're barefoot." Mabel doesn't care about that, because she's an adventurer. "And adventurers are often shoeless."

Her father is the manager, but her mother is the boss. This hotel has guests. Mabel is not a guest. She is a resident. She knows secrets about every room because she plays in every room, alone.

Into this solitary child's life comes a rude, intimidating new guest, Madame Badobedah (rhymes with ooooh-lah-lah). Imperious and fabulously dressed, Madame is old, old, old and she has red lips. She brings two dogs, two cats, a tortoise and 23 bags, "all clustered around her like a choir."

The woman is so standoffish and has so many fancy things that Mabel begins to spy on her and concludes she's an international jewel thief, a fugitive, a high priestess of crime. One day, she opens the door while Mabel is skulking outside and invites the child in.

Thus begins a great friendship between a nosy child and a frail, regretful former ballerina.

Sophie Dahl's prose paints pictures to rival Lauren O'Hara's humorous watercolors. There are a lot of words on every page, but the illustrations are plenty to look at while one is listening to a dramatic reader. And there are chapters.

Mermaids — a hot topic among my grandgirls — are a motif. But this is not the usual mermaid romance. Mysterious Madame just might take up residence as a puzzle in minds too young to recognize her situation, which is lonely and sad ... until she meets Mabel.