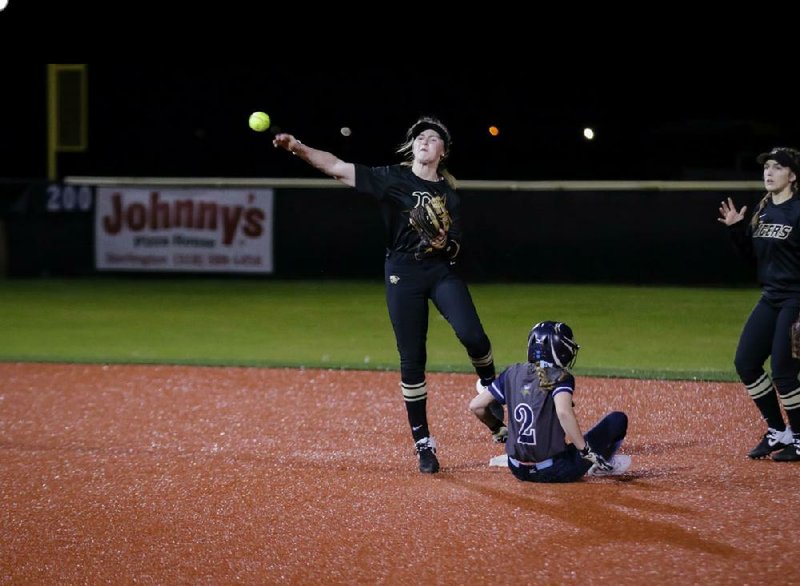 Kenzie Derryberry showed improvement as a hitter in the four games Benton- ville played before its season was shut down by the coronavirus pandemic. Derryberry, who is a junior, has given Missouri State a verbal commitment. (Submitted photo Kent Early)

The 18th in a series recognizing some of the state's best spring high school athletes who had their seasons canceled by the coronavirus pandemic.

Kenzie Derryberry eyed the hole between first and second base and knew it was the perfect location for her to hit the softball.

NOTEWORTHY Made a verbal commitment to Missouri State in the fall after attending camps on the Springfield, Mo., campus every summer since eighth grade. … Played 19 of 28 games last season … Was the Lady Tigers’ starting shortstop in last year’s Class 6A state championship game. … Had four hits in 14 plate appearances during Bentonville’s four games in Louisiana. … Had a home run and the game-winning single in what became the final game — a wild 16-15 victory over Shreveport Calvary Baptist on March 14.

The Bentonville junior swung and put the ball right where she wanted it, then she headed for first base. The second baseman was able to field the ball, but the throw home wasn't even close as Tallulah Pascucci raced home and gave the Lady Tigers a wild 16-15 victory over Shreveport Calvary Baptist in a game played at Monroe, La.

The hit allowed Bentonville to finish its trip with a 2-2 record, but Derryberry and her teammates weren't ready to believe that their season would consist of those four games as they made the return trip home.

"I think we were all in denial of it," Derryberry said. "We didn't want to believe that it could actually be taken away from us."

"I remember my dad after that last game saying, 'I'm glad you won because it will probably be the last game of the season.' We were still in denial until a few weeks later when our season had been canceled.

"I had no clue that was going to be my last at-bat. I would rather it not end that way."

Derryberry played in 19 of Bentonville's 28 games last season as she bounced around between second base, shortstop, third base and designated player. She was briefly pulled out of the lineup but returned as the starting shortstop when the Lady Tigers played in their fourth consecutive Class 6A state championship game last year and finished with a .313 batting average with 13 RBI.

She was determined to become the starting shortstop when the season began. Bentonville Coach Kent Early knew he was going to rely on her, as well as fellow juniors Emily Perry and McKenzie Vaughan as leaders since the Lady Tigers were starting four and sometimes five freshmen this season.

"I've always said in softball there are microwave kids and there are crock-pot kids," Early said. "Microwave kids are those that burst on the scene and can play from the start. Crock-pot kids need some time to adapt to the game, and because of Kenzie's position and what we had, it was going to take her a little bit longer.

"But I really expected a big season out of her this year. I thought she was going to be a diamond in the rough for us."

Derryberry's offseason included a verbal commitment to play softball at Missouri State, and she knew she had to be a better hitter this season, especially if she was going to bat third or fourth in the lineup. With Early's help, she armed herself with a new plate approach where she could attack pitches more often.

She had two hits, drove in a run and scored twice as Bentonville opened its trip with an 8-2 victory over Ruston (La.) Cedar Creek. In the final game against Calvary Baptist, she did a little bit of everything -- hit a three-run home run, stole a base and turned an unassisted double play -- before she picked up her game-winning hit on a 1-2 pitch.

"She has the tools to be a big-time player," Early said. "She was able to pick up when the pitcher was going to throw a changeup and stole third base. She also has a cannon of an arm at shortstop, and she happened to be at the right place at the right time to get the game-winning hit.

"I hate it that her season ended so soon. It's a shame that she and the other girls aren't getting to play."

If there is any solace to the shortened season, Derryberry knows she still has one year remaining in her high school career, and Bentonville will return almost all of its starters from this year's team. It will make her even more determined to go out on a positive note.

But she also knows there are other players who won't get that opportunity.

"I appreciate the fact I still have another season to play because it could be done. I still have one more shot at a state championship, and that gives me some comfort. I feel so bad for the seniors that their seasons were taken away from them. It's just not fair."