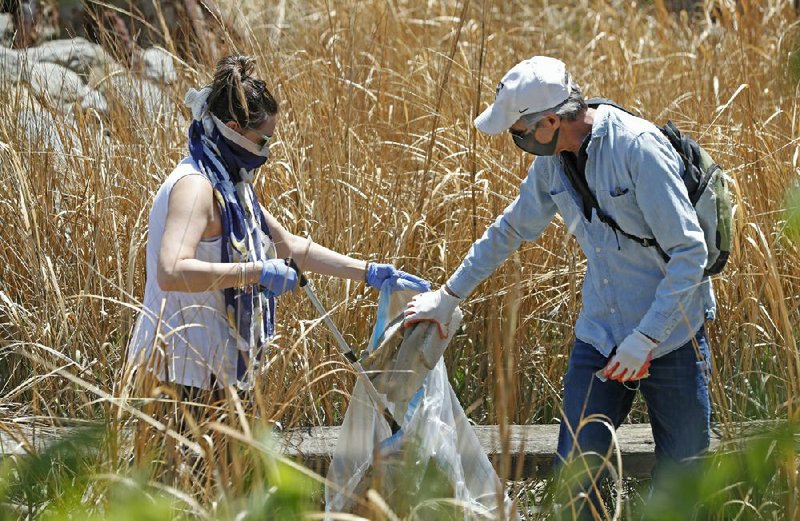 Volunteers Lauren Caputo and Kevin Kelly pick up trash Sun- day at Brooklyn Bridge Park in New York. They and others who joined them said they wanted to help preserve the tidal basin’s habitat. (AP/Kathy Willens)

MIAMI -- Tropical Storm Arthur inched closer to the U.S. Atlantic Seaboard on Sunday, although its impact was expected to be limited to some minor flooding and rough seas along the North Carolina coast.

Arthur formed Saturday off the coast of Florida, making this the sixth-straight year for a named storm to develop before the official June 1 start of the Atlantic hurricane season.

The National Hurricane Center in Miami issued a tropical storm warning for North Carolina's Outer Banks on Sunday. At 1 p.m. CDT, the storm's center was located about 310 miles south-southwest of Cape Hatteras, N.C. Arthur had top sustained winds of 45 mph and was moving to the north-northeast at 9 mph.

Forecasts said Arthur would stay well offshore of Florida, Georgia and South Carolina on Sunday and then approach the North Carolina coast, where 1 to 3 inches of rain was expected Sunday night and today. 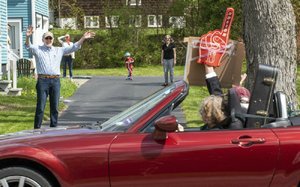 Photo by Sun Journal
A vehicle makes its way down College Street in Lewiston, Maine, on Sunday as part of a parade to honor longtime Maine Music Society artistic director John Corrie (left). Corrie’s farewell concert was scheduled for Sunday but was canceled because of the coronavirus pandemic. (AP/Sun Journal/Russ Dillingham)

The tropical storm warning was issued for parts of North Carolina's coast, from Surf City to Duck, including Pamlico and Albemarle Sounds.

Michael Lee, a meteorologist with the National Weather Service office in Newport, N.C., said tropical storm-force winds would be possible along the coast, particularly in the Outer Banks.

"Otherwise, it's going to be some heavy rainfall for a large part of eastern North Carolina," Lee said. "But the main threat that we're really trying to get out there is that there is enhanced risk for dangerous rip currents both today and tomorrow. So, any folks who want to try to go to the beach and get in the water, we have a high risk out for most of our beaches."

BOGALUSA, La. -- Thirteen people were shot Saturday night as a large group gathered in a Louisiana city for an impromptu memorial service for a man whose body was found earlier this month, authorities said.

No one was killed, but one person was in critical condition after the 9:15 p.m. shooting in Bogalusa, police said.

The crowd was gathered in a vacant lot to remember Dominique James, who was missing for several days before officers in a helicopter found his body May 8 inside his vehicle in the woods, investigators said.

"The best we can tell is a car drove by and shots were fired, and it was pure chaos from there," Bogalusa police Maj. Troy Tervalon said of Saturday's shooting.

Police haven't had a witness come forward to give them a better description of the shooting, and they have made no arrests, Tervalon said.

MEMPHIS -- Elvis Presley's Graceland says it will reopen Thursday after it shut down tours and exhibits because of the coronavirus outbreak.

Graceland said Sunday that it has adjusted its tours and its restaurant and retail operations since it closed in March.

The Memphis tourist attraction is centered on the life and career of the late rock 'n' roll icon. It annually attracts about 500,000 visitors, including international travelers.

Graceland said in a news release that it is reducing tours of Presley's former home-turned-museum to 25% capacity, requiring employees and encouraging visitors to wear face masks, and limiting restaurant capacities to 50%.

Temperature checks for guests and employees will be implemented, and hand-sanitizing stations are being installed, Graceland said.

"We are helping Memphis and Tennessee to get back to some sense of normality," Joel Weinshanker, managing partner of Graceland Holdings, said in a statement.

Louisiana gets OK on food aid for kids

BATON ROUGE -- Louisiana has been granted federal authority to help feed more than 611,000 students during the coronavirus pandemic.

The state announced that the U.S. Department of Agriculture gave the approval to provide the assistance for families of children in kindergarten through 12th grade who normally get free or reduced-price school meals. State public schools closed March 16.

A news release from the state said local school systems will notify families that they might be eligible for the program known as P-EBT. Those families can apply through a P-EBT portal on the Louisiana Department of Education website beginning today. The application deadline is June 7.

Once the child's information is verified, the state family services department will mail a P-EBT debit card loaded with $285 per child. Recipients will also receive instructions for the cards, which can be used to buy food items eligible under the federal Supplemental Nutrition Assistance Program at stores that accept SNAP cards.

The news release from the state Department of Education and the Department of Children and Family Services said officials expect to begin mailing cards May 26. Benefits will be available for 365 days.