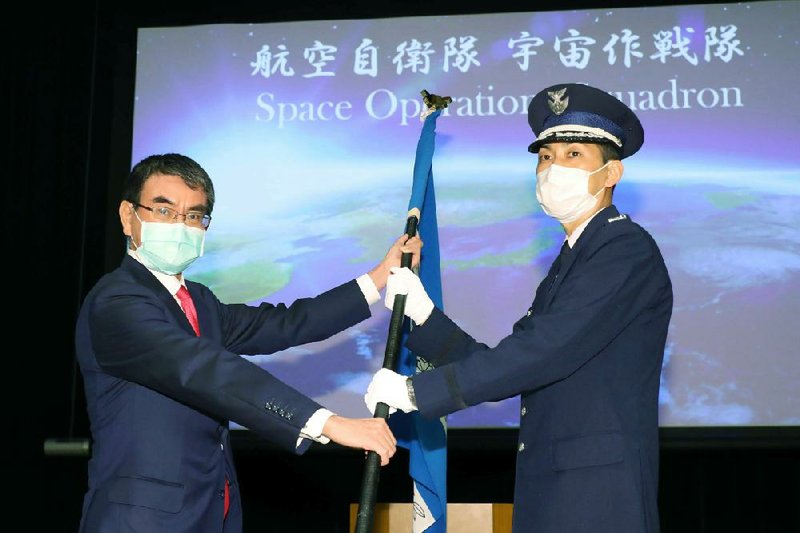 Japan Defense Minister Taro Kono, left, hands off a unit flag of the Space Operations Squadron to the head of the unit Toshihide Ashiki, right, at a launch ceremony at the Defense Ministry Monday, May 18, 2020, in Tokyo. The launch of the Space Operations Squadron reflects Japan's increasing need to defend itself from threats in cyberspace electromagnetic interference against Japanese satellites. (Kyodo News via AP)

9 Afghan intel officials killed at base

KABUL, Afghanistan -- A suicide bomber in a stolen military Humvee targeted a base in eastern Afghanistan belonging to the country's intelligence service early on Monday, killing at least nine members of the force, Afghan officials said. The Taliban claimed responsibility for the attack.

At least 40 members of the force were wounded in the attack near the city of Ghazni, the provincial capital of Ghazni, according to Arif Noori, the spokesman for the provincial governor. Eight of the wounded were in critical condition and were transferred to the capital, Kabul, for further treatment, Noori added.

According to Noori, the bomber used a stolen military Humvee full of explosives, detonating it as he approached the main entrance gate to the base. Taliban spokesman Zabihullah Mujahid said the insurgents were behind the attack in Ghazni province, where the Taliban control most of the countryside and the rural areas.

The provincial capital, also called Ghazni, briefly fell to Taliban control twice in recent years. The province has in the past been the scene of many large-scale attacks against both Afghan and NATO forces.

The Space Operations Squadron, part of Japan's Air Self-Defense Force, starts with 20 members and is expected to grow to about 100 members once the unit is fully operational in 2023.

The role of the unit is mainly to monitor and protect Japanese satellites from enemy attacks or space debris. It will also conduct satellite-based navigation and communications for other troops in the field.

The launch of the new unit comes amid growing Japanese concern that China and Russia are seeking ways to interfere, disable or destroy satellites.

"It is important that we gain superiority in the space domain as well," Kono said Monday at a launch ceremony. "We must adapt to the new security environment as soon as possible."

Prime Minister Shinzo Abe has pushed for Japan's Self-Defense Force to expand its international role and capability by bolstering cooperation and weapons compatibility with the U.S., as it increasingly works alongside American troops and as it grows concerned about the increasing capabilities of China and North Korea.

Libyan base captured from Hifter forces

CAIRO -- Forces aligned with Libya's U.N.-installed government seized control of a key western military base from eastern-based commander Khalifa Hifter on Monday, delivering a major blow to his more than yearlong effort to oust the government.

The capture of al-Watiya air base, roughly 80 miles south of the capital, Tripoli, was acknowledged by loyalists from both sides, and footage posted on social media showed fighters from the Tripoli government roaming around the base, on runways and in hangars.

"The base has been a strategic asset for [Hifter] for over half a decade," Emadeddin Badi, a Libya expert and nonresident senior fellow at the Atlantic Council, said on Twitter. "Though its capture is by & large symbolic militarily, strategically & morale-wise, it is significant."

The seizure of al-Watiya was the latest setback for Hifter's forces, a hodgepodge of militias that was once known as the Libyan National Army but now calls itself the Libyan Arab Armed Forces.

UNITED NATIONS -- The U.N. special envoy for Syria called Monday for talks between Russia and the United States to help end the more than nine-year-old war, saying the two major powers could play "a key role."

Geir Pedersen's encouragement to Moscow and Washington to take a leading role was his first public appeal to the rival powers on opposing sides of the conflict -- Russia which has been the key backer of Syrian President Bashar Assad and the United States which supports the opposition.

Pedersen told the U.N. Security Council on Monday that the three countries that have taken the lead in arranging cease-fires in Syria -- Assad allies Russia and Iran and opposition backer Turkey "are key players too." 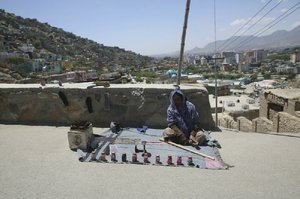 He said members of a committee from the Syrian government, opposition and civil society who are supposed to draft a new constitution for the country and the 15 council nations are key players as well.

Pedersen said there have been too many fleeting opportunities in the past decades to move from conflict to a political path that were lost, and "those missed moments were followed by renewed violence and a hardening of positions among regional and international actors."

"We must not repeat this pattern," he said.