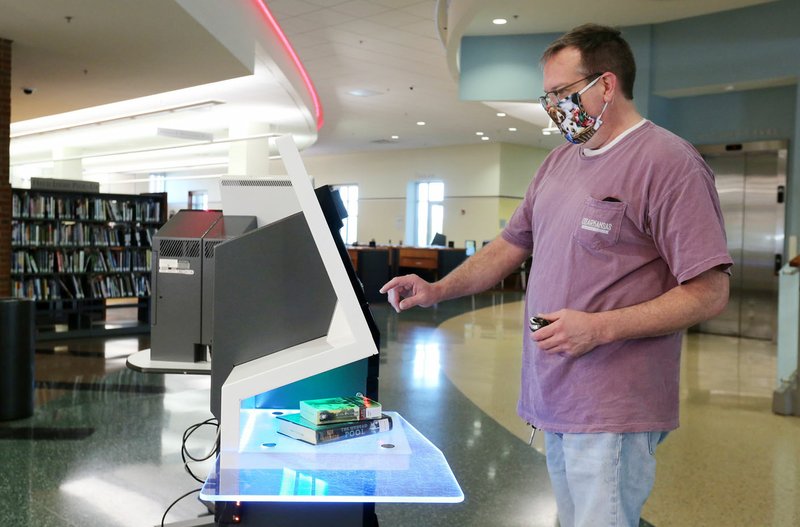 Kevin La Born uses a self check out kiosk Monday at the Fayetteville Public Library. The library opened with limited hours and social distancing restrictions for the first time since mid-March because of the covid-19 pandemic. Twenty two patrons visited the library within the first 10 minutes of opening. The library will continue to offer online catalog items for curbside pick-up. Library materials can now be returned in drive-by drop boxes. Check out nwaonline.com/200519Daily/ and nwadg.com/photos for a photo gallery. (NWA Democrat-Gazette/David Gottschalk)

FAYETTEVILLE -- The Fayetteville Public Library opened for three hours Monday and welcomed people inside for the first time in two months.

Executive Director David Johnson told the board 285 people walked in the doors and checked out 652 items, in addition to 73 curbside checkout items. In the first 10 minutes after opening at 9 a.m., 22 people walked in, he said.

"We didn't know what to expect this morning," Johnson said. "We had a debrief this afternoon, and it seemed like everything went swimmingly well."

The library will be open to the public for limited hours today, Thursday and Friday in a "grab-and-go" capacity. Seating areas inside have been removed or sequestered with caution tape or signs. Only 50 people at a time are allowed inside. Face masks are required for anyone older than 10. One entry point in and one way out are cordoned at the front lobby, with employees counting how many people are inside with a tablet computer. Staff frequently cleaned commonly touched areas, and restrooms were locked Monday.

Administrators will review the protocols after two weeks, Johnson said. Hours may be adjusted, such as opening on weekend days, or occupancy could increase to one-third capacity as set by the fire marshal, he said.

"It was really nice to see people who were just so happy to be in here," Johnson said. "They were so thankful and so generous and nice to everyone, asking questions and obeying the rules as we would indicate."

The library closed March 16 because of the coronavirus pandemic but began offering curbside pickup of material about a month later. People can still get their items that way, and overdue fees will continue to be waived. Items returned to drive-by drop box locations are quarantined for at least three days before being made available again.

Libraries in Springdale, Rogers and Bentonville remain closed to the public. On Monday, Springdale started offering a curbside service, and Bentonville opened self-service pickup and return. Rogers' library remains closed until further notice, but has kept a number of online resources available.

Javian Walter, a 20-year-old English major, had a stack of books in hand shortly after the Fayetteville library opened Monday. He said he could have made selections online, but there's power in browsing. A book on JFK's assassination, an analysis of Christian colleges and The Electric Kool-Aid Acid Test by Tom Wolfe piqued his interest.

"Some of these books probably haven't been touched in months, so I'm not super worried," Walter said.

Ashley Bradley, with her two 6-year-old daughters, Judith and Eliza, and 5-year-old son, Leo, had a small collection building in the children's section.

"They were so excited to come get new books," Bradley said. "They've been waiting for this day, where they can come and see them physically, in person, and pick out what they wanted."

The pandemic has had one positive side effect: With so much time at home, the girls started reading chapter books, Bradley said.