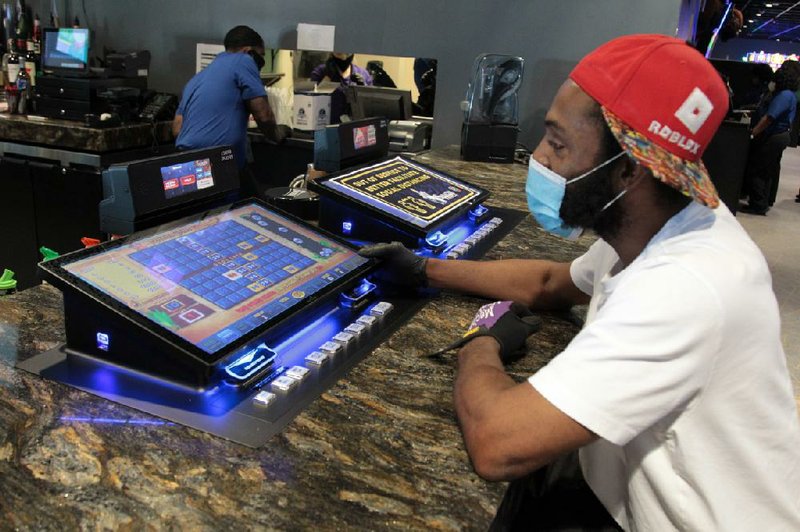 Ricky Jones of Pine Bluff tries his luck Monday at one of the video poker machines that line the bar at Saracen Casino Annex. Jones was one of the first people through the door Monday morning. More photos at arkansasonline.com/519casino/. (Arkansas Democrat-Gazette/Dale Ellis) ( Dale Ellis / Dale Ellis)

WEST MEMPHIS -- When Andrew Burns, a retired Memphis police officer, went to bed Sunday night, he had one goal in mind for the next morning: getting up in time to be in the first wave of visitors allowed into Southland Casino Racing.

Burns arrived at the casino around 6 a.m. to find lines already forming under the gaming awning, in front of the only entrance that would be open for the foreseeable future.

"I just wanted to get out of the house finally. It's something to do," Burns said. "I play the $1 slots. I usually sit at the tables, too."

Lights flashed and music played Monday inside Arkansas' three casinos for the first time since Gov. Asa Hutchinson ordered them to close March 17, six days after the state's first confirmed case of the coronavirus.

It's the latest industry to receive clearance to reopen under the first phase of the state's relaxation of restrictions that were imposed in an attempt to slow the spread of the coronavirus. Hutchinson announced earlier this month that casinos would be allowed to reopen Monday with restrictions.

By 9 a.m. when Southland opened its doors, hundreds of people filed through queues of winding yellow blocks, and the line snaked down and around the sidewalk in front of the facility.

On Monday morning, people in the crowds wore masks as required, but most pulled them down to the bottom of their chins as they stood in line. The recommended separation of 6 feet between people also was not followed by most as they crowded together to make their way to the door.

Later in the morning, a security guard stood before the crowd and made a loud announcement, causing people to spread out and adjust their masks.

Entry to the facility was slow as guards took temperatures and scanned driver's licenses.

Inside, signs with the slogan "Play it Safe" and bullet points on safety measures were tacked to the walls or scattered on easels throughout the gaming area. Chairs were removed from the gaming floor, leaving numerous slot machines empty to create a 6-foot space from one person to another. Pumps dispensing hand sanitizer jutted up every few feet. Cleaning crews stood at the ready with masks, paper towels and spray cleaner in hand, ready to sterilize the individual slot machines every time a player vacated the space.

"We use the strongest, best cleaning agents out there," said Jeff Strange, Southland's senior marketing director. "We adjusted the ventilation system and have extra cleaning personnel."

A snack bar and sports bar were open for business, but with a limited "grab and go" menu.

"We're keeping a close eye on it all," he said.

Strange said that in his 30 years of gaming experience, he's never been through the issues that the covid-19 pandemic has brought.

"It's not really a challenge more than it's a job," Strange said. "Things are different, but we're playing it safe. It's a fluid situation, and we're just keeping an eye on it. We're happy to be back."

Outside in the line, Connie Felts motioned to her mother, Regina Raynor.

"She's the only reason I'm here," Felts said, then laughed. "We were here early. I'm happy for her that she gets to play a little, and I'm definitely happy to be out of the house."

Both woke up early to take their place in line. Felts said she's not worried about the virus because of the precautions in place.

Larry Richmond took off work to get back to one of his favorite pastimes.

"I play the slots as much as I can. I'm a regular customer. This virus is bad," Richmond said, shaking his head. "I think it's going to be here forever. This is our new normal."

Oaklawn Racing Casino Resort in Hot Springs announced March 15 that its casino would close for the rest of the month after two coronavirus cases were confirmed in Garland County. Thoroughbred horse racing was allowed to continue at the track, but fans weren't allowed inside to watch.

"It was an amazing experience for us to still be able to race," General Manager Wayne Smith said, "but this was without fans, so that wasn't enjoyable."

Oaklawn officials allowed media members inside the casino early Monday morning before it opened. Chairs were missing at some machines, and lights were turned off at some games in an effort to ensure social distancing. Signs reminding patrons to wear their face masks were scattered around the casino floor.

Media members were ushered out of the facility before the casino opened for the public. Officials would not allow media members to interview patrons on casino property.

Oaklawn Racing Casino Resort submitted its plan last week to operate the casino and food and beverage outlets. The plan included adjusting casino hours, operating at 33% of capacity, requiring guests to wear masks at all times, banning smoking inside and setting machine and seating limitations.

Patrons aren't allowed to play on adjacent slot or video gaming machines in the same row. Only three players will be allowed at each live blackjack table, and craps tables will be limited to six players, three on each side. Security workers at the door are tasked with checking for masks, taking the temperatures of patrons and scanning their identification.

"All of our team members will have to be social distancing police, so to speak," Smith said. "It will be a monumental task."

Smith said the casino could continue to operate at 30% capacity, but it isn't something he wants to do.

"This is a building built for entertainment and fun," he said. "We have postponed live events and music, but we would like to get back to that soon."

The casino addition stood out in the cavernous space that was soon to be filled by the lines of patrons snaking around the casino while waiting to enter the facility. Smith said he wasn't surprised by the lines because he had seen the same reaction at other casinos across the country.

Oaklawn is key to the city's reopening, said Steve Arrison, CEO of Visit Hot Springs, the organization dedicated to promoting the Spa City.

"It was very unfortunate we weren't able to have visitors during the racing season because it's a very key time for the city's economy," he said. "This is a good first step today."

Brittney McWhorter, an East Texas native, travels the country with her husband selling necklaces, and they decided to take the business back to Hot Springs this summer. She said the casino's reopening can only be a good thing for her street business that operates on Central Avenue.

"It brings people from all over the country," she said. "Last summer, I talked to people from Canada, Kentucky, Tennessee and more. It was the reason we came back this year."

Arrison said tourism is the main source of revenue for the city and that Oaklawn is one of its biggest draws. He said he believes the closure of Oaklawn Racing Casino Resort probably cut business within the city by 70% to 80%.

"Tourism is our business," he said. "We don't have the big business buildings or large government facilities like some cities. We have some industry, but tourism drives this city."

A stream of patrons were lined up at 10 a.m. and ready to go when the Saracen Casino Annex in Pine Bluff opened.

Visitors had their identification verified, their temperatures checked, and they were asked to answer three health screening questions and to apply hand sanitizer before being admitted onto the gambling floor.

"Everyone, employees and guests, are required to wear a face mask inside," said Carlton Saffa, Saracen Development project manager. "If they don't have one, we'll provide them with one, but they must be worn at all times inside the building, and social distancing requirements must be observed."

Saffa said physical preparations for the annex included installation of barriers between slot machines, the deactivation of some machines, and the placement of markers on the floor to aid social distancing efforts. Employees also spent several hours over the weekend doing drills at the entrance to ensure patrons could be moved through the line efficiently.

"This is the only place where a player will be allowed to drop their mask, and that's just for the few seconds it takes to get a good picture of their face with one of the cameras," Saffa said. "Otherwise, all patrons will be masked at all times, as will all of our employees."

Patrons also are encouraged to make liberal use of hand sanitizer.

"We've placed hand sanitizer stations along the walls everywhere there's a blank space," Saffa said. "We had some installed before we initially opened, but we've installed at least a dozen more, and we're going to encourage everyone to make use of them."

Two employees, Kirstin Ard and Quortney Glover, eyed the entrance just before the doors opened at 10 a.m., each with drink trays balanced on one hand. Both wore face masks and gloves, and while both said they didn't particularly like the masks, they understood they are necessary.

Both were excited to get back to work.

"I'm ready," Ard said. "I've been looking forward to this and wanting to get back to work ever since we shut down."

"Yeah," Glover said. "It's been long enough. We missed each other, and we missed our crowd. It's good to be back."

A third employee walking past the two gave them a small wave.

"Y'all look so cute in your masks," the employee said.

"I don't feel cute," Ard said with a laugh. "I feel claustrophobic."

Reginaldo Ortega of Pine Bluff was one of the first patrons allowed inside, and he quickly took a seat at a video poker machine along the bar. He said he didn't have a strong opinion on how effective the mask requirement would be, but he didn't mind having to wear one.

"I don't usually wear a mask outside," he said. "I think if you've got corona, or if you're going to get it, you've already got it. I don't know that it helps."

Another patron trying his luck at the video poker machines, Ricky Jones of Pine Bluff, was less skeptical about the masks and social distancing protocols and said he was impressed with the measures being taken by the casino.

"I believe it's a good setup," he said. "With everything that's going on, I don't really think it's too early. I mean, everybody else is going back to work, but as long as everyone is covered and taking all of the precautionary measures, I feel like this will work out for the best."

When asked how his luck was going, he said it wasn't too bad.