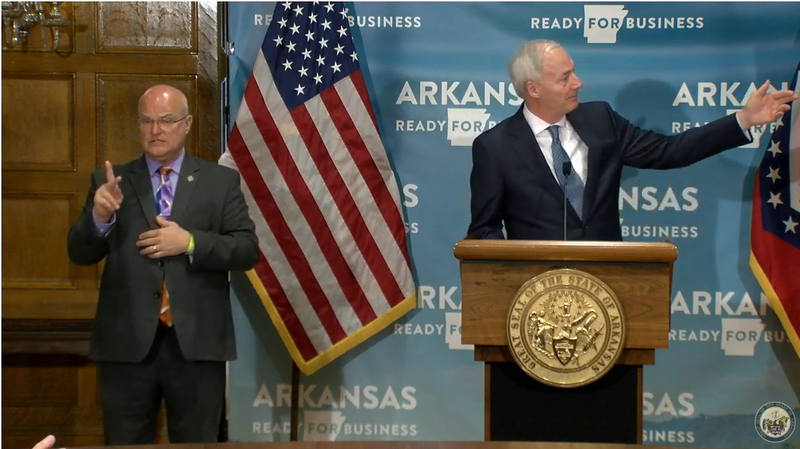 Gov. Asa Hutchinson speaks about coronavirus response during a news conference Tuesday, May 19, 2020.

Gov. Asa Hutchinson announced plans Tuesday to test every nursing home resident and worker in Arkansas for the coronavirus next month, meaning the state will add at least 40,000 tests - and possibly up to 50,000 - to its ongoing testing efforts in June.

“This additional testing will better protect our nursing home residents and our staff,” Hutchinson said at his daily briefing on the spread of covid-19 in Arkansas. “And it will give confidence ... that we’re doing everything we can to make sure there is no spread or contagion in these facilities.”

So far, 39,700 Arkansas residents have been tested in May, with 3,014 of them on Monday, with a positivity rate of 1.5 percent, the governor said. Monday’s testing efforts also set a record for the state as health care authorities hope to complete 60,000 tests by the end of the month, Hutchinson said.

As of Tuesday, authorities have identified 4,923 cases of the coronavirus, an increase of 110 since Monday. Two more patients died overnight to bring the death total to 102, Hutchinson told news reporters. One more patient has been hospitalized since Monday, increasing the number of patients to 78, with 14 on ventilators.

Announcing the testing goals for nursing homes, Hutchinson praised the efforts of workers at the state’s long-term care facilities who have “acted very heroically ... and have done an amazing job.”

Hutchinson said the virus has been kept out of 85 percent of the state’s facilities, with the contagion limited to 35 nursing homes that have reported at least one infection.

By the end of the week, Arkansas will have paid out $21.9 million in “enhanced payments” to about 8,000 workers in the state’s nursing homes and long-term care facilities, as approved by the Legislature, the governor said. That’s money “well deserved,” he said.

Nursing home residents with the virus increased by one to 325 since Monday, Dr. Nate Smith, secretary of health, told reporters, with 189 staff infected, an increase of two.

Smith said another 94 patients recovered from the virus overnight, bringing the total to 3,739 recoveries. Arkansas now has 1,082 patients with active cases of covid-19, with 83 of them in nursing homes, 369 in state prisons and 630 in the community, Smith reported.

Gov. Asa Hutchinson and state health officials will provide an update on Arkansas' covid-19 response at 1:30 p.m. Check back to watch the live video.

[Video not showing up above? Click here to view » https://www.youtube.com/watch?v=Hrgm4pwgRKA]

CORRECTION: An earlier version of this story misstated the number of tests conducted on Monday. 3,014 tests were conducted Monday.