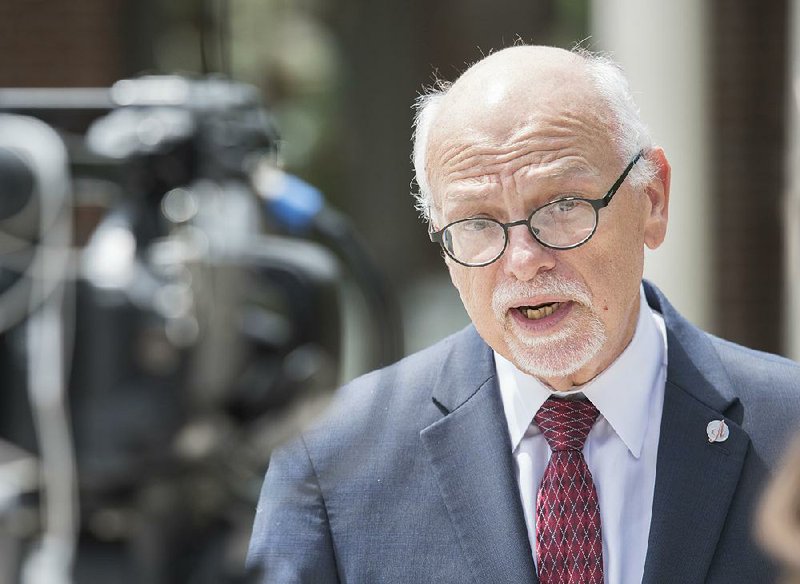 Looming revenue declines for the University of Arkansas, Fayetteville are to be partly offset by cuts in personnel spending, but Chancellor Joe Steinmetz said no layoffs are planned.

Across Arkansas and the nation, public universities and colleges face dropping state appropriations as state revenue dwindles during the coronavirus pandemic. The forecast for higher education has dimmed, and Moody's Investors Service has again downgraded its higher-education outlook to negative.

In response to revenue declines, UA's hiring freeze for noncritical positions will continue into the fiscal year that begins July 1, Steinmetz said Tuesday. Faculty and staff members also will do without annual merit raises, with exceptions for faculty members receiving tenure or promotions, a UA spokesman said.

The Fayetteville campus is projecting a decline of $15.7 million in state appropriations as part of its proposed budget that will be considered Thursday during a videoconference meeting of the University of Arkansas System board of trustees. UA will propose its reduced budget along with the system's other schools and campuses, which nearly all are asking to spend less than last year.

Other Arkansas universities have delayed their trustees meetings this spring, in part to give administrators more time to see what the fall will look like.

"Sitting in mid-May, I've never been in a situation with so much uncertainty going into the next fall semester," Steinmetz said.

"I don't know of a time that higher education has been hit with more unanticipated large, new costs, related to covid, and then having to face unprecedented reductions in revenue," Tandberg said, adding that "my guess is when it comes to state funding and state budgets, it's going to take several years to recover, and that's going to present an ongoing, significant challenge to our public colleges and universities."

University of Arkansas System schools plan to collectively cut tens of millions of dollars from their budget, driven primarily by less in expected statewide revenue. The cuts amount to only a small percent of overall expenses for some schools and hover closer to 10% for others.

Cuts would occur in the form of reduced supplies, services and salaries, although most universities say they are merely freezing hiring or cutting vacant positions. The University of Arkansas at Monticello, reducing its expenses by nearly $3.3 million compared with what was approved last year, cut at least one job that was filled, according to its budget summary that will be presented to trustees.

The University of Arkansas at Pine Bluff will cut more than $6.5 million in scholarships and fellowships, compared with the current fiscal year's budget. Housing and dining services ($5 million) and athletics ($580,000) will face the bulk of those scholarship and scholarship allowance reductions.

Of the system's five traditional bachelor-degree institutions, UAPB intends to cut the most from last year: 11.7%, from about $89.4 million in approved expenses for the current year to about $79 million in expenses proposed for next year.

The university is monitoring the effects of the pandemic and keeping students' needs "at the forefront" of discussion on staff reductions.

"While we have not yet determined if layoffs are in our future, we are watching our enrollment very closely," according to an emailed statement from the university.

Though Steinmetz said no layoffs are planned, UA's options for dealing with funding cuts will include "personnel combinations and eliminations" , according to its budget document. Cuts at the flagship institution are relatively small compared with the system's other universities.

But the previous budget ended up a casualty of the pandemic, as the state pulled back on some appropriations to public universities in response to its own declining revenue as unemployment rose.

Last year, $122 million in state general revenue allocations were listed for UA in budget documents as published by the state Division of Higher Education.

Budgeting for less in state revenue is a "conservative fiscal approach," according to budget documents, and one that Steinmetz said involves spreading cuts proportionally across colleges and units.

UA, like other universities, relies on faculty members who are not on the tenure path. These faculty members, sometimes called nontenure track faculty, can at times be on a long-term contract to teach various courses. Or, they may have less job security and be hired to teach on more of an as-needed basis.

Steinmetz said the number of these non-tenure track faculty members hired to work at UA this fall will depend on the amount of course hours that students are signing up to take.

"If we keep steady with the credit hour production, I would anticipate no reductions -- or at least not significant reductions -- on the number of these positions because they'll be needed to teach," Steinmetz said.

Layoffs and furloughs have occurred at colleges across the country, and furloughs loom at Henderson State University, where reserves amount to too little to cover the losses.

The financial impact of the pandemic has added an extra challenge to schools already struggling because of declining enrollment and financial mismanagement, such as Henderson and the University of Arkansas at Little Rock.

UALR will propose a budget with a $9.9 million deficit, to be covered with reserves. That's less than the budget shortfall the university incurred during the current year but more than what trustees had approved for a deficit for the current year. At the end of the 2019 fiscal year, the university had $40 million in unrestricted reserves, although it plans to use some of that to cover a shortfall for this current year.

The university will save about $1 million from a consolidation of its five academic colleges into three, but the financial benefits of reducing its academic offerings -- approved May 4 by trustees -- won't begin to be realized until the academic year that begins in 2021. Degree programs must be "taught out" until majors have completed them, slowing the process of eliminating those programs, faculty and other associated costs.

UALR officials weren't available for an interview Tuesday, spokesman Jeff Harmon said, but the university described its budget in a three-page preface for trustees. The university is budgeting for $6 million less in state appropriations, compared with last year's original budgeted amount. The campus has additionally anticipated lower enrollment for the upcoming year, although officials have hoped for a larger freshman class than this year's.

For the fourth year in a row, the university is requesting flat salaries across the campus, except for faculty promotions and those whose pay must be increased by law.

The University of Arkansas at Fort Smith also plans to use reserves to cover a budget deficit.

The university is proposing to reduce expenses by $6.9 million, about 8.8% compared with what was approved for this school year. That's largely because of an expected 15% decline in enrollment, a jarring drop compared with a typical year for an Arkansas public university, where the biggest enrollment decrease last year was less than 9%.

That drop is based on surveys of high school students, college students and their parents, UAFS Chancellor Terisa Riley noted in an email to the Arkansas Democrat-Gazette.

As a result, the university will cut institutional scholarship and fellowship expenses by about $1.5 million, compensation by about $3 million and supplies and services by about $2.3 million. A salary freeze will continue.

"UAFS is planning to honor all of its institutional scholarship awards to continuing students," spokeswoman Rachel Putman said in an email.

Still, with projected losses, the university expects to come up $6.5 million short, which it intends to cover using education and general reserve fund. That fund currently stands at $9.8 million.

Several university subcommittees will evaluate internal "cost reduction and revenue enhancement ideas" and present their findings to the "University Budget Council, a group of administrators, faculty, staff, and students that advises the Chancellor on University budget issues," according to the email.

"There are currently no plans to lay off or furlough employees. If it were to become necessary to consider such action, it would be well vetted through the structure and broadly representative groups described above."