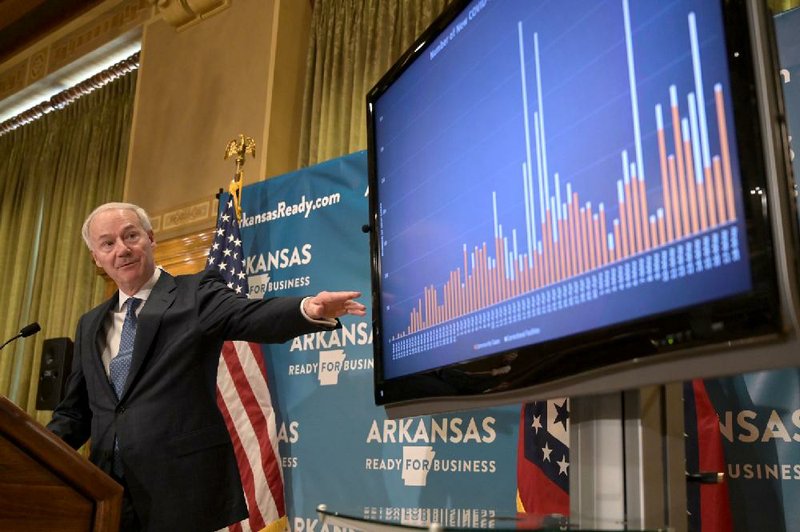 Arkansas Gov. Asa Hutchinson on Tuesday announced a plan to test every resident and worker at nursing homes and other long-term-care facilities in the state for the coronavirus by the end of next month.

Meanwhile, the state's official count of coronavirus cases rose by 110, including 106 among Arkansans who are not prison inmates.

That was the second-highest, one-day increase in non-inmate cases since the first Arkansan tested positive on March 11, topped only by the 113 such cases that were added to the state's total Thursday.

Hutchinson said the spike "reflects increased testing, but also the fact that we have still work to do in Arkansas and a reminder to be careful."

The Republican governor has set a goal of testing 60,000 Arkansans -- about 2% of the state's population -- this month.

"If you add to that of course, our routine testing, you're going to see a very large number of tests next month here in Arkansas," Hutchinson said.

"This additional testing will better protect our nursing home residents, it will protect our staff, and it will give confidence to our staff, our residents that we're doing everything we can to make sure that there is no spread or contagion in these facilities."

Statewide, the Arkansas' death toll from the virus rose by two, to 102, while the number of patients hospitalized with covid-19 increased by one, to 78. The state's official tally of cases rose to 4,923.

According to charts Hutchinson displayed at his daily news conference on the pandemic, the number of hospitalized patients has been mostly increasing since it dropped to 59 on May 12 -- the lowest level since April 1 -- but is still down from a high of 109 patients hospitalized on April 27.

Fourteen of the hospitalized patients on Tuesday were on ventilators, an increase of two from a day earlier.

The inmate number is up from 412 that the department reported a day earlier.

The inmate cases are added to the state's total as information from laboratory reports are entered into a state database, a process that often takes several days.

Hutchinson spoke a day ahead of his meeting at the White House with President Donald Trump to discuss Arkansas' response to the virus.

The governor said he plans to wear a mask to the meeting.

"I understand that that is required in the West Wing, but I would be wearing a mask anyway," he said. He said he also expects to be tested for covid-19 before the meeting -- the first time he's been tested for the virus.

"Beyond that, I expect to have a normal meeting with the president and return to Arkansas," he said.

Three of Arkansas' highest one-day totals for positive coronavirus tests among residents who aren't prison inmates have come since May 4, the start of the state's first phase of loosening restrictions that were imposed on businesses and social gatherings to limit the virus' spread.

But state Department of Health Secretary Nate Smith said increased testing, rather than the relaxed restrictions, appear to be the reason for the recent uptick.

Out of the 1,082 Arkansans with active infections, meaning they had tested positive and had not recovered, as of Tuesday, only three reported having gone to a restaurant during the period when they could have been infected.

"These activities don't appear to be driving our community cases at this point," Smith said.

Instead, he pointed to a testing rate that he said had "pretty much tripled" from earlier levels, with the 3,414 tests conducted in the state over the past day setting a new record.

The state's 70 local health units that remain open during the pandemic tested 240 people Monday, the first day they began offering the tests.

"We are identifying a lot of cases, especially asymptomatic cases, that we weren't picking up before this," Smith said.

Hutchinson announced earlier this month that the U.S. Centers for Disease Control and Prevention had pledged to supply the state with enough supplies to collect and transport specimens for testing from 90,000 people this month.

This week, the U.S. Department of Health and Human Services announced that Arkansas will receive $78 million from the Paycheck Protection Program and Health Care Enhancement Act, passed by Congress last month, to further expand the state's testing capacity.

Of the non-inmate cases that were added to the state's total Tuesday, the largest number, 19, was of Pulaski County residents.

Sevier County residents, made up the next-highest number, 14, followed by St. Francis County with 13.

The Health Department also provided a list Tuesday of "occupational clusters" where at least five people have tested positive.

The construction site of the Saracen Casino Resort in Pine Bluff topped the list, with 56 cases, although all but five of those who had tested positive were listed as being recovered.

Tyson Foods had 46 cases at "various locations" around the state, including 14 that were still active.

A Belleville Boot Co. in Forrest City was listed as having 35 cases, including 29 that were active.

Nebo Poultry in Dardanelle and Russellville had 14 cases, all of which were active.

The Pilgrim's Pride plant in De Queen had seven cases, all but one of which were active.

In some cases, such companies "already have a plan for testing, and we just receive the results and help them to work through the contact tracing," Smith said. "In other cases we do provide testing and whatever support is needed."

The Hope Center, a Christian-based men's addiction rehabilitation facility in Russellville, has 11 cases of covid-19, according to a report released Tuesday from the state Department of Health.

The Pope County facility has seven residents who tested positive for the virus and four health-care workers with the disease.

Jay Hernandez, director of the Hope Center, declined to comment when contacted.

Pope County has a total of 76 positive cases, with the first case confirmed in late March.

Ben Cross, county judge of Pope County, and Richard Harris, mayor of Russellville, released a joint statement about the county's increase in cases.

"Some of this increase is due to a cluster at an in-patient rehabilitation center in Russellville. The remainder of the increase in active positive cases is not purported to be a community spread but is based on potential localized clusters," Cross and Harris said in the joint statement. "Additional information will be forthcoming as the Arkansas Department of Health continues its investigation."

Protective measures remain in place in the city and county. Walk-in traffic to government buildings is still restricted, but the community is opening up parks and businesses.

"There is a tendency to relax standards of social distancing and maintain the same level of hygiene that may have been practiced early on in this pandemic," Harris and Cross said in the statement. "Out of respect for the health of others in our community, we encourage all citizens to adhere to the standards outlined by health officials and medical providers."

The two men encouraged members of the at-risk population to continue practicing self-isolation and limit their exposure to crowded areas.

"If you must get out, then use the appropriate social distancing measures, use a face mask, and be sure to wash your hands frequently," Cross and Harris said in the statement.

Smith said the state's increased testing capacity is one reason for the plan to test all residents and workers at long-term-care facilities next month.

He said the department recently installed a "high throughput instrument" that will allow it to conduct "about 700 tests in a run." He said he hopes the machine will be ready to use next week.

The department will also contract with Arkansas Children's hospital to have tests run in a similar machine that the hospital is installing, and the John L. McClellan Memorial Veterans Hospital in Little Rock has agreed to perform tests for the department, he said.

He said Arkansas officials have also learned by watching other states that have a broader strategy to test nursing home residents and workers.

Arkansas' current "rapid response" strategy involves testing all residents and workers at a facility where a resident or worker has tested positive, rather than at all facilities regardless of whether an infection has been identified.

Hutchinson on Tuesday pointed to evidence that the strategy has had success.

He displayed a chart showing that, after peaking at 121 a week ago, the number of active cases in nursing homes has fallen each day and stood at 83 as of Tuesday.

Another chart showed that 192 nursing homes don't have any cases among residents, while the other 35 have at least one. Six homes have 11 or more residents who have tested positive.

Rachel Bunch, director of the Arkansas Health Care Association, which represents nursing homes, said 72 nursing home residents who tested positive have recovered from their illnesses, including a 102-year-old resident of Walnut Ridge Nursing and Rehabilitation, and 19 nursing homes where a resident or staff member tested positive in the past no longer have any active cases.

"This is an incredible accomplishment, and the work that they're doing is really paying off," she said.

The most recent deaths included the first one of a Mississippi County resident and the 20th from Jefferson County.

According to reports from the Pulaski County coroner's office, two residents of The Lakes at Maumelle Health and Rehabilitation were also among Arkansans who recently died from the virus.

At least seven residents of the home, and 42 residents of nursing homes or assisted-living centers around the state, have died from the virus, according to a Health Department report.

The mother of five boys and grandmother to seven tested positive for the virus May 7 and had a "rapid decline" from that point, according to the coroner's report.

Her son Lynn Cook said his mother -- who lived in Pulaski County but had strong roots in Monroe County around Brinkley and Clarendon -- spent her life in service to others.

Taylor was an activities director in nursing homes in Brinkley and Judsonia, and cared for elderly people in their homes, Cook said.

"She was in the end stages of Alzheimer's," Cook said. "She was an avid reader of the Arkansas Democrat-Gazette. She read it her whole life from front page to the back. It was delivered to the nursing home, and she never missed a day."

He praised the nursing home for its handling of the covid-19 pandemic. Cook declined to give the name of the nursing home, but the coroner's report listed the facility as The Lakes of Maumelle.

"It's a great facility, and they worked so hard to take care of their patients and to fight the spread of covid," Cook said. "They wore masks and protective clothing. It was just exhausting for them. They are true heroes."

The family will have graveside services so the mourners can practice social distancing, he said.

She had Alzheimer's disease and had tested positive for covid-19, according to a coroner's report.

Another Pulaski County resident, James Millsap, 73, of Little Rock died Sunday after being hospitalized for covid-19.

Millsap was in the intensive care unit at Baptist Medical Center in Little Rock after being admitted Thursday with acute respiratory failure, according to a report from the Pulaski County coroner's office.

[Video not showing up above? Click here to watch » https://www.youtube.com/watch?v=Hrgm4pwgRKA]

He tested positive for covid-19 Thursday.

He had a history of congestive heart failure, hypertension, non-Hodkins lymphoma and prostate cancer, according to the coroner's report. 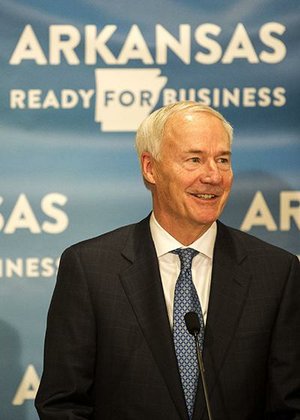