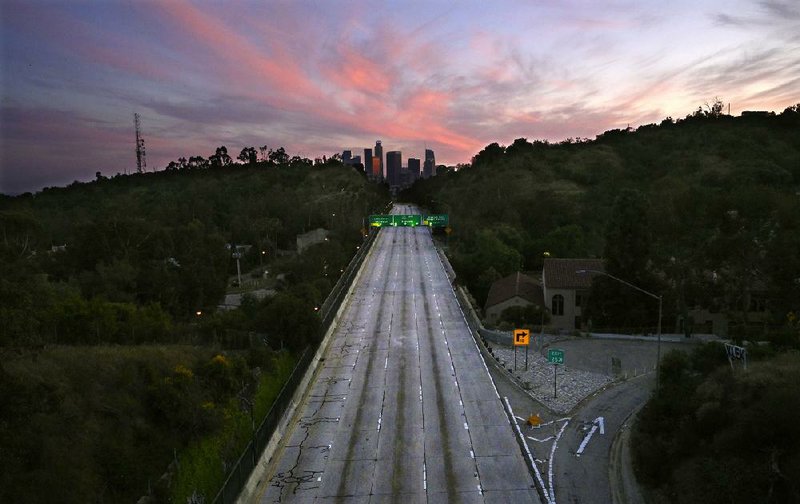 The 110 Arroyo Seco Parkway that leads to downtown Los Angeles is free of traffic in this photo taken April 26. The sudden drop-off in driving, ying and industrial output helped reduce carbon dioxide emissions dramatically in recent months, researchers see it as just “a blip” in the long term. (AP/Mark J. Terrill)

The lockdowns and shuttered economies caused by the coronavirus pandemic fueled a momentous decline in global greenhouse gas emissions, a group of scientists reported Tuesday.

As coronavirus infections surged in March and April, nations around the globe experienced an abrupt reduction in driving, flying and industrial output, leading to a decline of more than 1 billion tons of carbon dioxide emissions. That includes a peak decline in daily emissions of 17% in early April, according to the study published in the journal Nature Climate Change. For some nations, the drop was much steeper.

Scientists have long insisted that the world must drastically scale back carbon pollution to mitigate the worst effects of climate change over coming decades.

The study released Tuesday projects that total emissions for 2020 likely will fall between 4% and 7% compared with the previous year, but that's considerably less dramatic than the decline during the first few months of the year, when economies screeched to a halt. The final 2020 figure will depend on how rapidly, or cautiously, people around the world resume ordinary life.

The unprecedented situation produced by the virus has offered a glimpse into the scale required to cut global emissions, year after year, in order to meet the most ambitious goals set by world leaders when they forged the 2015 Paris climate accord. Last fall, a United Nations report estimated that global greenhouse gas emissions must begin falling by 7.6% each year beginning in 2020 to avoid the worst effects of climate change.

Tuesday's study underscores how far the world remains from that long-term aspiration. The forced plunge in greenhouse gas emissions in recent months, while extraordinary, returned carbon pollution levels to those last seen in 2006.

"History suggests this will be a blip," said Rob Jackson, a Stanford University professor and one of the authors of the peer-reviewed study, which attempts to assess the virus's impact by nation and economic sector. "The 2008 [financial] crisis decreased global emissions 1.5% for one year, and they shot back up 5% in 2010. It was like it never happened."

Researchers say the experience demonstrates how broad structural changes to the energy system are critical if the world is to slash emissions in a meaningful, sustainable way.

"We can see now that behavior change alone is not going to do it," said Corinne Le Quere, lead author of the study and director of Britain's Tyndall Center for Climate Change Research.

Le Quere said she expected to find larger reductions in the power and industrial sectors during the pandemic. Instead, she said, many sources of carbon dioxide and other pollutants have continued steadily, almost on autopilot, even as much of the world has ground to a halt.

While some aspects of life might change in the wake of the pandemic -- more people working remotely, fewer people commuting and taking frequent plane trips -- individual changes probably will not make much of a long-term mark on emissions, said Zeke Hausfather, a scientist and director of climate and energy at the Breakthrough Institute.