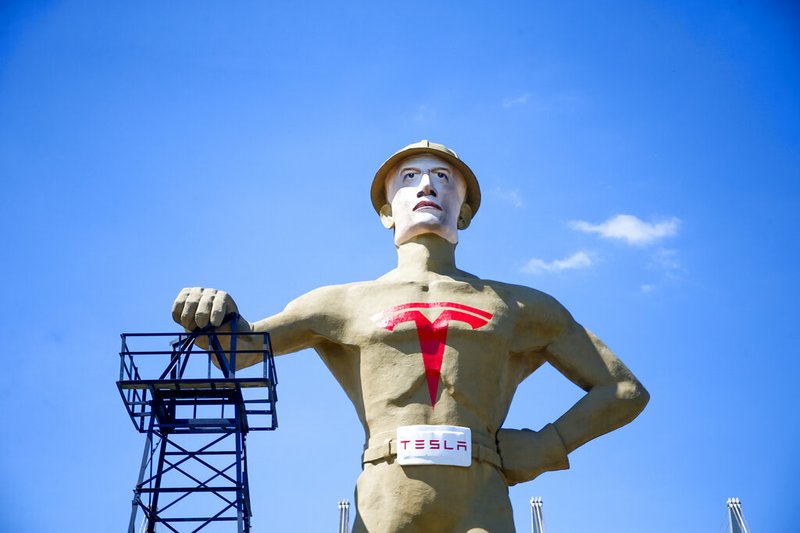 The Golden Driller, painted as Tesla founder Elon Musk, is shown during a press conference for "Tulsa for Tesla" at Tulsa's Expo Square on Wednesday, May 20, 2020. (Tulsa World via AP / Ian Maule )

The 75-foot tall, golden statue in the heart of the city has gotten a makeover that includes a bright-red Tesla logo on its chest, a Tesla belt buckle over its Tulsa belt buckle, and a mask to make the oil field worker resemble the company’s chief executive officer, Elon Musk.

City officials unveiled the new look at a press conference Wednesday afternoon at the Tulsa Expo Center, where dozens of Tesla electric cars were parked outside a building that hosted the international petroleum trade show for years.

“I think it’s pretty cool,” said Tulsa Mayor G.T. Bynum, standing beneath the mammoth statue. “It’s a way of showing how we want to roll out the red carpet and partner with this company.”

The company has reportedly picked Tulsa and Austin, Texas, as finalists for its new factory that is expected to employ more than 10,000 people. No timeline for a decision has been announced.

Oklahoma touts its low tax rates and cost of living, particularly its low utility costs, when trying to woo businesses from other states. An auto manufacturer would qualify for numerous tax incentives, including a Quality Jobs program that provides cash rebates to companies that create good-paying jobs, a sales tax exemption that covers purchases of machinery and equipment, and a five-year property tax exemption.