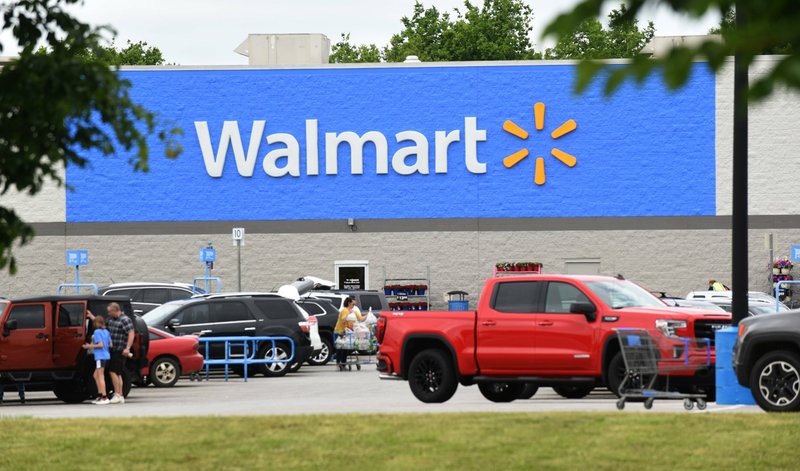 Walmart Inc. weathered the pandemic crisis in the first quarter to grow revenue 8.6%, to $134.6 billion, the company said Tuesday. Despite the higher operational costs related to the coronavirus pandemic, profit rose 3.9%.

Reporting earnings before the stock markets opened, Walmart posted net income of $4 billion, or $1.40 per share, for the quarter that ended April 30, compared with $3.84 billion, or $1.33 per share, in the same period a year ago.

Adjusting for an unrealized gain of 22 cents on Walmart's equity investment in Chinese e-commerce firm JD.com gave Walmart per-share earnings of $1.18. That still topped the average earnings estimate of $1.17 per share from 25 analysts surveyed by Thomson Reuters.

Efforts to keep customers and employees safe during the pandemic, and to reward workers for their hard work during the crisis, cost the retailer nearly $900 million in the quarter. Brett Biggs, Walmart's chief financial officer, said in a conference call with investors that the company likely will spend about the same in the second quarter.

Most of the $900 million went to employee bonuses and other benefits, Biggs said. Safety measures including cleaning and sanitizing stores; installing sneeze guards; and providing thermometers, masks and gloves for workers also factored into that investment, he said.

Brian Yarbrough, a retail analyst for Edward Jones, said he was surprised by how well Walmart did in the quarter given all the virus-related expenditures.

"I actually thought it was going to be a bigger hit to profit, so you've got to give them credit for a very solid job there," he said.

Yarbrough said sales were a bit higher than he had anticipated, and Walmart likely has been able to cut costs in some areas, such as travel and marketing. Another surprise came from its e-commerce business, he said, which, as analysts are seeing with Target, normally pressures profit.

"Their e-commerce actually lost less money in the quarter this year than last year at this time, and that's promising if you're an owner of the stock," Yarbrough said. What's likely made the difference, he said, is Walmart's curbside grocery pickup, which costs the company less than shipping items to homes.

"I think they're doing a solid job in a difficult environment," Yarbrough said.

Carol Spieckerman, a retail consultant and president of Spieckerman Retail, said "it wasn't a given that Walmart would perform well," despite its strong grocery business and low-price model.

"The pressures on its business model as consumers shift wildly to hoarding essentials and buying online were considerable," Spieckerman said. "Once again, Walmart has proven that its massive store base is an asset and critical link to its online business."

Walmart has more than 5,300 stores and clubs nationwide. It employs 2.2 million workers globally, with about 1.5 million of those in the U.S.

Walmart's U.S. division, which accounts for about 70% of the retailer's revenue, reported net sales of $88.7 billion, up 10.5%. Sales at stores open at least a year, considered a key indicator of a retailer's health, climbed 10% on the strength of the food, consumables, and health and wellness categories.

Walmart was already well-positioned to meet the demand for grocery pickup and delivery. The retailer now has 3,300 store pickup locations nationwide and more than 1,850 stores offering same-day grocery delivery, the company said in the earnings report.

"The 10% same-store sales increase and increase in average ticket size really stand out in this environment," Spieckerman said. "Customers obviously planned their less frequent visits to Walmart and stocked up. That's remarkable given the economic pressures weighing on consumers."

Net sales for Walmart International grew 3.4%, to $29.8 billion. Same-store sales were positive in nine of 10 markets, including the division's major ones of Mexico, China, Canada and the U.K., as people stocked up in response to the virus.

However, sales were partially offset by pandemic-related closure of stores, as in Central America, or economic conditions, as in South America. In India, the government only allowed the shipment of items considered essential, which affected Walmart subsidiary Flipkart.

Since Walmart's international markets end the quarter in March, Yarbrough said, that division is likely to see a bigger impact from the pandemic in the second quarter.

Walmart said the pandemic actually had a positive effect on Sam's Club membership, which grew income 6.4%. The total number of memberships and renewals increased as shoppers bought in bulk to prepare for the uncertainties ahead.

Walmart also announced in the report that it is discontinuing Jet.com, which it acquired nearly four years ago to enhance its online strategy. The company said it made the decision based on the "continued strength of the Walmart.com brand."

And in a not-unexpected move, the retailer withdrew its guidance for the rest of the fiscal year, citing "unprecedented variability in the macro environment brought on by covid-19."

Biggs said some of the variables include the duration and intensity of the virus globally; the length of stay-at-home orders; the scale of the government's economic stimulus; employment trends; and consumer confidence.

Looking ahead, Doug McMillon, Walmart's president and chief executive, said in the call that the company expects the retail environment "to stay quite volatile in the coming weeks and months."

But the retailer has an aggressive mindset, McMillon added. "We want to drive the long term as we manage the short term," he said.