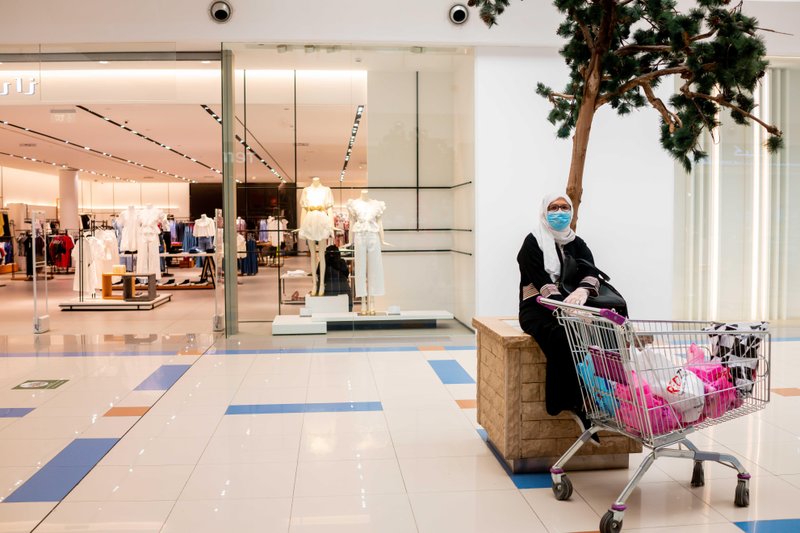 A woman waits for a friend in a mall in Riyadh, Saudi Arabia on May 12, 2020. (For The Washington Post by Tasneem Alsultan)

BEIRUT -- Saudi Arabia and other Gulf Arab countries are seeing a sharp spike in coronavirus cases, prompting governments to reimpose some restrictions that had been lifted late last month ahead of the holy fasting month of Ramadan.

Saudi Arabia, the largest Arab Gulf country, had recorded about 15,000 cases when Ramadan began. But in less than a month, the kingdom's numbers quadrupled, with more than 62,000 confirmed cases as of Wednesday, making it the Arab world's new hotbed of infection.

In response, the kingdom has announced that it will enforce a nationwide 24-hour curfew starting Saturday and continuing into next week during the Eid al-Fitr festival, which marks the end of Ramadan.

Kuwait has experienced an even sharper increase in cases, the most dramatic in its neighborhood, with confirmed infections up nearly sevenfold from since the first day of Ramadan to top 17,500 on Wednesday.

Kuwait announced plans earlier this month to reimpose a lockdown from May 10 until May 30 in response to the spike. Walking for exercise is permitted for two hours every evening, but driving cars is not.

In Qatar, where cases have quadrupled to over 37,000, the government decreed new restrictions Monday. It announced the closure of nonessential stores for 10 days and required that all citizens and residents download a cellphone tracking app to monitor those who come into contact with people who test positive for the virus. Noncompliance can be punished with three years in jail and a fine of up to $55,000.

The three other Gulf Arab countries -- the United Arab Emirates, Oman and Bahrain -- had also eased restrictions at the onset of Ramadan, an especially social month. All those countries have now seen the number of infections surge.

After Saudi Arabia recorded its first coronavirus case on March 2, the public health response was swift. The deeply religious kingdom barred Muslims from conducting daily prayers inside mosques, and pilgrimages to the holy sites of Mecca and Medina were halted. International flights were suspended, most major cities were placed under 24-hour lockdowns, most public places were closed and curfews were put in place.

In the UAE, cases have more than doubled after the government eased restrictions on the eve of Ramadan, reopening malls for those between 12 and 60 years old, allowing restaurants and cafes to operate at 30% capacity and permitting salons to resume "hair and nail services."

Oman also relaxed restrictions early in Ramadan, allowing the reopening of nonessential businesses such as electronics stores and repair shops for cars and fishing boats, and its numbers more than tripled, to about 6,000 cases by Wednesday.

Information for this article was contributed by Paul Schemm of The Associated Press.