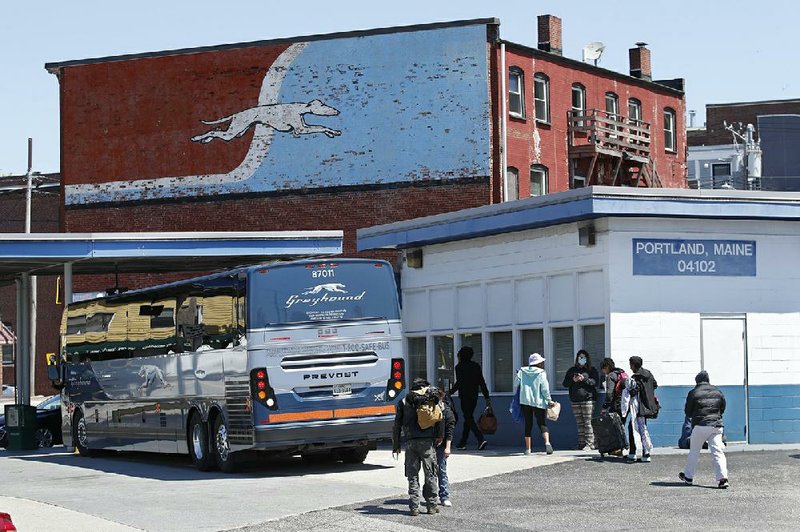 Riders gather before boarding a Greyhound bus recently in Portland, Maine. America’s private buses have ground to a halt, and members of the industry say they need federal assistance. (AP/Robert F. Bukaty)

LEWISTON, Maine -- The nation's 3,000 or so private bus lines -- and the millions of people who rely on them for cheap, basic travel -- fret that they'll go under without the same kind of federal help trains and planes are enjoying as a pandemic-immobilized America tries to get back to work and play.

Buses, integral to the transit network, serve a multitude of purposes as they facilitate 600 million passenger trips annually, nearly twice the U.S. population. They take college students home for the weekend; they take businesspeople and tourists to airports and on fall color tours; they take gamblers and sports fans to casinos and stadiums.

They provide charter trips and are also increasingly vital to the work commute, especially in congested areas such as San Francisco and New York City. They employ about 100,000 people -- many of whom are furloughed at the moment -- and generate more than $200 billion in travel and tourism revenue, according to the American Bus Association.

More than 95% of the nation's private fleet is shut down, said Peter Pantuso, the trade group's leader.

Larry Prelle of National Park, N.J., had hoped to take the Megabus to the National Cherry Blossom Festival in the nation's capital, but pandemic restrictions canceled both the bus and the festival.

"I know some of them aren't surviving the shutdown. A couple down here that were charter buses are just gone," Prelle said. "They'll never be seen from again."

Rail lines, public transit systems and the airline industry received billions in aid as part of the federal coronavirus relief act. The private bus industry, however, has largely been left to fend for itself.

The industry has called on the government to provide $15 billion in grants and loans to help it weather stay-at-home orders that have idled buses for two months in some regions.

"I think there's going to be several companies, if not dozens or even hundreds, that six months from now are going to run out of money and are not going to have any other options to weather the storm," said Jeff Greteman, chief executive officer of Windstar Lines, which operates in the Midwest and Florida.

Buses play a key role in the economy because of support they provide to other businesses, such as hotels, said Don DeVivo, president of Dattco, which operates in New England.

Restaurants, attractions and tour group destinations rely on them to shuttle large numbers of people around unfamiliar areas while on vacation. They take college sports teams -- and game day fans who spend money on everything from tickets to beer -- to and from their destinations.

Bus operators have lobbied Congress and rallied this month in Washington, drawing more than 1,000 motor coaches from as far as the West Coast.

The industry, the senators said, faces "a long road to recovery" and is missing out at a critical time. School, camp and tour groups in the spring and summer are reliable customers, and those activities are largely canceled this year.

"We must ensure that the motor coach industry is still there for our communities when this pandemic has passed," Collins and Reed said in a statement.

A spokesperson for the Treasury Department did not respond to a request for comment.

In Maine, Northeast Charter of Lewiston, which operates 27 motor coaches, 25 school buses and another 10 shuttle buses, has not had any business since March 16.

Every booking since then has been canceled, said owner Scott Riccio, who participated in the Washington rally. The same goes for all June trips, he said, and many already for July, August and September.

While other transportation sectors can get federal grants and loans, bus lines have only the Paycheck Protection Program, he said. That program, which helps keep workers on the payroll, will eventually run out.

The industry fears many companies will go under if help doesn't arrive soon, creating a transportation vacuum that would be hard to fill and depriving the public of a cheap travel option.

"This industry is being devastated," Riccio said. "There's no one working. There's no revenue. Zero."

Information for this article was contributed by David Sharp of The Associated Press.