At hearing, agency’s chief defiant on recent deregulation by MATTHEW DALY THE ASSOCIATED PRESS | May 21, 2020 at 2:06 a.m. 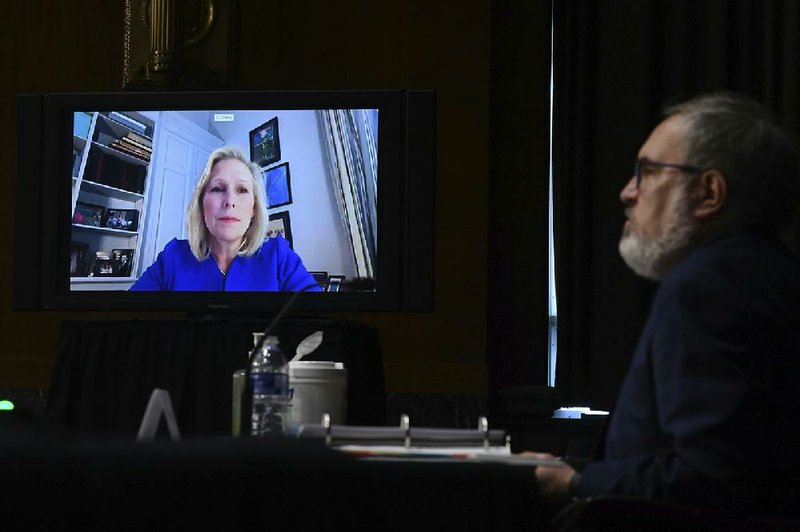 WASHINGTON -- Democrats on Wednesday blasted the Trump administration's moves to roll back environmental regulations during the coronavirus crisis, with one senator saying a "pandemic of pollution" has been released.

The Environmental Protection Agency has weakened regulations dealing with fuel efficiency and mercury emissions and has waived enforcement on a range of public-health and environmental mandates, saying industries could have trouble complying with them during the coronavirus pandemic. The rollbacks are among dozens of actions by the EPA to ease requirements on industries to monitor, report and reduce toxic pollutants, heavy metals and climate-damaging fossil fuel emissions.

Administrator Andrew Wheeler said the EPA remains "open for business" and "at work meeting our mission of protecting human health and the environment."

Wheeler told the Senate Environment and Public Works Committee that the EPA has approved hundreds of virus-killing disinfectants in recent weeks -- more than 400 now, compared with 60 on March 5.

Wheeler cited actions the agency has taken, including a revised rule that lifts protections for some of the millions of miles of streams, creeks and wetlands in the United States. The long-sought rule change to the Clean Water Act provides much-needed regulatory certainty and predictability for American farmers, landowners and businesses, Wheeler said.

The EPA issued 18 deregulatory actions last year and is developing 45 more now, saving businesses billions of dollars in regulatory costs, Wheeler said. The actions do not come at the cost of enforcing environmental laws, he added, but are aimed at "modernizing decades-old regulations and bring them up to date."

Democrats scoffed at that claim.

A staff report released by Delaware Sen. Tom Carper, the committee's senior Democrat, said the EPA under Republican President Donald Trump "has continued its relentless march to weaken or repeal rules that were designed to remove greenhouse gas, soot, mercury and other pollution from our air."

It said that since March 1, the EPA has proposed or finalized several rules that will result in increased air pollution and could cause tens of thousands of premature deaths.

"While the rest of the country works around the clock to combat and overcome this deadly respiratory pandemic, the Trump EPA has been spearheading a pandemic of pollution," Carper said.

The EPA's actions have removed "critical protections for public health under the guise of industry relief and economic growth," Carper added. "Under normal circumstances, these rollbacks would be cause for grave concern. During the covid-19 pandemic, they are profoundly irresponsible and cause for alarm."

An EPA spokeswoman disputed Democrats' claims that the temporary enforcement waiver allows companies to openly exceed pollution limits. The agency will not seek penalties for noncompliance with routine requirements on a case-by-case basis, if the EPA agrees it was caused by the pandemic.

Sen. Ed Markey, D-Mass., accused Wheeler of acting to benefit industry at the expense of millions of Americans, especially the poor and vulnerable who are disproportionately harmed by increased air and water pollution.

"You have turned EPA into Every Polluters' Ally," Markey said. "Shame on you. Your decisions make this pandemic worse."

Wheeler shot back: "Sir, your facts are not correct," adding that air quality in the United States is "healthier today than it was three years ago" when Trump took office.

The EPA cited preliminary data showing a decline in 2019 in emissions of nitrogen oxides, sulfur dioxide, carbon dioxide and mercury from power plants in the lower 48 states.

But according to federal data, air quality had slipped during the first two years of the Trump administration. Anecdotal data from this year shows dramatic improvements in air quality worldwide because of lockdowns during the pandemic.

Sen. John Barrasso, R-Wyo., the committee chairman, said the EPA under Wheeler and Trump "has replaced punishing regulations that harmed the coal industry, farmers and ranchers and many small businesses" in Wyoming and elsewhere. He said that Trump's EPA has saved U.S. businesses more than $5 billion in regulatory costs.

McCarthy, now president and chief executive officer of the Natural Resources Defense Council, a leading environmental group, could not be reached immediately. But a spokeswoman said Sullivan's claim of lawlessness was aimed at the wrong administration.

The organization has filed 112 lawsuits against the Trump administration since 2017 and has won 90% (65 of 72) of the cases resolved so far, said spokeswoman Jenny Powers.