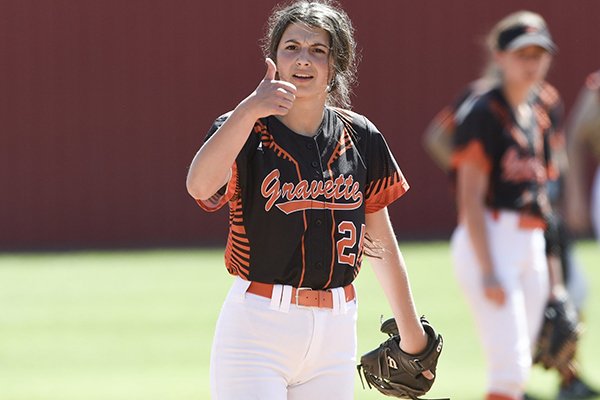 Gravette's Cally Kildow (24) is shown during a game against Farmington in the 4A North Regional Softball Tournament on Sunday, May 5, 2019, in Farmington. ( Charlie Kaijo)

But there was only one he used repeatedly.

NOTEWORTHY Signed with the University of Arkansas after orally committing to the Razorbacks as a freshman. … Missed sophomore season after suffering a broken leg in a state basketball tournament game. … As a freshman, batted .443 with 47 hits, 32 RBI, and was 23-7 with an 0.53 ERA and 331 strikeouts as a pitcher. … As a junior, she batted .464 with 39 hits and 24 RBI but was just 4-5 with a 2.98 ERA in the circle. … Plays for the DeMarini Aces of Kansas City travel team in the summer.

The 21st in a series recognizing some of the state’s best spring high school athletes who had their seasons canceled by the coronavirus pandemic.

"She's just driven," said Jones, who coached Kildow on the Gravette softball team. "That is really the best way to describe her. She just has a different motor. She's driven to succeed, she's driven to wear that Razorback uniform."

That drive and willingness to do whatever it takes to win almost ended Kildow's athletic career before it really started humming.

As a sophomore on the Lady Lions basketball team, Kildow's energy fueled the team to a state tournament berth. In a quarterfinal game that was barely five minutes old, a loose ball was bounding toward the stands. Kildow instinctively went full speed after it to save a possession.

"I went into the stands to try and save the ball, and when I came down, my foot went under the bleachers but I kept going," she said. "My leg pretty much snapped in half. I looked down, and my foot was completely turned backward."

Before she put on a Gravette softball jersey as a freshman, Kildow had committed to the University of Arkansas. Then she went out and had a spectacular ninth-grade season, batting .443 with 32 RBI, 8 doubles and 6 triples. She also dominated in the circle, going 23-7 with an 0.53 ERA and 331 strikeouts.

She was looking to become one of the most dominant softball players in Northwest Arkansas as a sophomore, but that was gone in a flash as she was rushed to a hospital to put her leg back together.

"I've had four surgeries since the accident," she said. "I had my last one in the fall when they took the last of the screws out. For the first time since my freshman year, I finally feel close to 100%."

Kildow missed her entire sophomore softball season, and was far from 100% last year as a junior, although she did bat .464 with 39 hits and 24 RBI. Her injured leg affected her pitching, where she was just 4-5 with a 2.98 ERA and 80 strikeouts.

She and the other Gravette seniors were all pointing to this season to make a deep state tournament run and perhaps topple Farmington.

The coronavirus pandemic ended those plans after just two games.

"For the seniors, this has been really hard to take, just to have everything taken away."

After the initial shock, Kildow began focusing on the next chapter of her career at Arkansas, where she hopes to earn early playing time as a utility player.

Kildow said her commitment to the Razorbacks came after she started to receive interest from other colleges prior to her freshman year. She attended a number of camps, including those at Alabama, LSU, Kentucky and others. Arkansas reached out to her and invited her to a camp, where she impressed the coaches.

"I did really well at the camp, and they invited me back for a visit," she said. "They offered, and it was like a dream come true. Prior to that visit, I wasn't necessarily set on Arkansas. I just wanted to go to the best place for me. But once I visited, it was hard not to want to represent my home state."

Jones, who has stepped down as the Lady Lions coach to focus his attention on his assistant principal position, said Kildow has what it takes to excel at a high level.

"Kids like her, they have a different mentality," he said. "She has that special gift. She's driven, she's hard-headed in a good way. When she had to miss so much time and now this, she will be ready when she gets there. I have no doubt about that."

Kildow has been working with a pitching coach and getting work in on the field to prepare for the next level.

Because of the NCAA granting all spring athletes an extra year of eligibility, Kildow's role might change. Arkansas is expected to have nine pitchers on its roster if all the players return.

"Honestly, it doesn't matter to me what role they use me in," said Kildow, who already has earned 21 college credits. "I think I'll be more of a utility player, so I'm focusing on that."