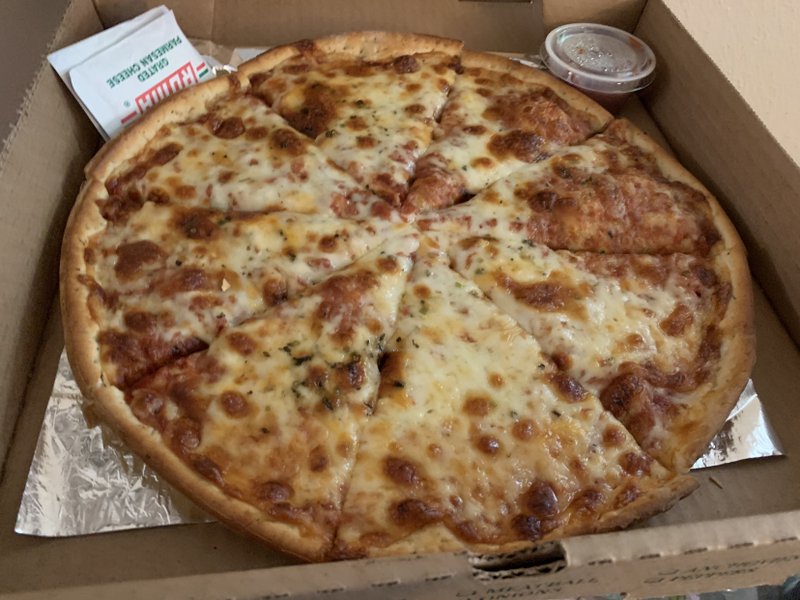 To go, or not to go — that is the question: Whether 'tis nobler in the mind to suffer the slings and arrows of dine-in dining, or to take out items against a sea of hunger, and by opposing ... eat them?

While we still weigh the pros and cons — and there are quite a few of each — of returning to dining rooms, and as bars reopen this week and next (in-house bars now, just plain bars starting Tuesday), we'll continue to check out takeout options. We're concentrating on locally owned establishments within a reasonable distance from Ground Zero (we're working from home), the better to be sure that if it's hot to begin with, it's still likely to be hot when we get it to our table.

As with all our restaurant reviews, we pay for our meals up front and we don't do these by request.

WHAT WE GOT: The 11-inch Cheezy Peezy pizza ($10; $15 for the 15-inch). It has been years uncounted since we last visited Pizza D. It was quite the hot spot in the late '70s and '80s, a convivial place to hang out, share a pizza and swig a few beers. The remarkable jukebox contained the entire catalog of Beatles singles and even a handful of classical pieces (including the entire Chopin A-flat major Polonnaise, occupying both sides of a 45-rpm disc). But as pizza places proliferated and Pizza D, as it has been popularly known, insisted on remaining a smoking establishment even unto current times, we drifted to other places where we didn't feel the need to burn our clothes after we left. (Pizza D closed Dec. 31, 2018, and reopened under new ownership-management in March 2019 — still permitting smoking. We're told that when the dining area eventually reopens, it'll still be smoking.)

Anyway, we figured that now that they're only serving to-go orders, there'd be less risk to our lungs. We ordered pizza, sticking with the simplest pie on the list: a small Cheezy Peezy, a generously thick layer of cheese blend and not very prominent layer of red sauce atop a thinnish crust, turned up at the edges so they crisp. Pizza D's pies have always been a little bland, and this was no exception, but a couple of packets of grated parmesan helped perk it up, as did the little plastic cup of extra sauce.

HOW IT WORKS: Pizza D has always served more than just pizza, of course, and even the "Quarantine Edition" of the menu includes wings, burgers, penne pasta bowls and specialty sandwiches and salads. We did note with some sadness that the legendary Pizza d'Resistance (aka the PDR) — beef, sausage, pepperoni and Genoa salami with caramelized onions, fresh basil and tomatoes — is no longer on the menu. Also sadly missing, Pizza D's other long-term claim to fame, the Camel Rider sandwich — ham, salami and mozzarella, oven-toasted, plus lettuce, tomato and a light Italian herb vinaigrette.

A big banner hangs on a street-side barrier for curbside pickup, but at a recent lunch we had to enter the restaurant to collect our pie, with a wait of a couple of minutes for it to come out of the oven. We paid on the premises. Neither staff member in the erstwhile dining room was wearing a mask or gloves, but both did offer us a big slug of hand sanitizer out of a gallon jug.

HOW IT'S GOING: We passed another customer coming out of the establishment bearing bagged food as we were going in, but it wasn't busy. We've seen the place buzzing, however, with dinner pickups.

WHAT WE GOT: The Monte Cristo ($8), ham, turkey and (allegedly) pepper jack cheese with strawberry preserves on a house-made biscuit, and a hefty slice of amaretto cheesecake ($6.50). We had to attack the sandwich with a knife and fork, since picking it up, even if practical, would have been impractically messy. The layers, including the strawberry preserves, had slid leftward in transit, so we took it on in portions, which meant getting to the top part of the biscuit and the preserves last, which was fine with us. We didn't notice any cheese but perhaps it was hiding. The huge slice of cheesecake, one of HLB's specialties, was incomparable.

HOW IT WORKS: Since HLB has opened its tiny dining room for eat-in service, we placed and paid for our to-go order at the counter. It took a few minutes for it to come out of the kitchen, during which time our server, who seemed to be as starved as we are for actual human contact, kept up a running chatter while first praising and then slicing our cheesecake. She wasn't masked, and wore a glove only when slicing and boxing up the dessert.

HOW IT'S GOING: Only we were picking up an order fairly late in a lunch cycle. HLB is closed Tuesday-Wednesday.

WHAT WE GOT: Ten Ingredients Fried Rice, no veggies ($7.50), which, we guess, would actually make it "Seven Ingredients Fried Rice" after we had them withhold the peas, carrots and onions. (The remaining elements include rice, baby shrimp, chicken and beef.) We've been ordering this here since shortly after Go Go China took over a former Arby's a couple of decades ago, and we admit to giving too short a shrift to many other worthy dishes. The portion is huge, and the blend of whatever they put into the wok, sauce-wise, keeps the flavor continually interesting — so many places' fried rice, if it isn't inedibly dull to begin with, gets boring halfway through. At whatever point we give up on this, it's because we're full, or tired.

HOW IT WORKS: Go Go China has a to-go-go window, which has always provided a bigger part of their business than in-house orders, and they've now closed their dining room altogether. A handful of cooks are at the woks, so everything is made to order, and they're used to putting food out in short order. We waited in a line of cars for about 10 minutes, about usual for any order even in the over-the-counter days. There is a cost for everything, including fortune cookies (10 cents) and fried noodles, aka "Chinese chips" (50 cents), that almost everybody else just throws in with your soup. And they do not take credit cards or checks, so have cash in hand when you pull up to the window.

HOW IT'S GOING: We mentioned that line of cars — half a dozen — during a recent lunch hour, which is pretty close to normal.

WHAT WE GOT: Friday's lunch special ($9), honey glazed ham, accompanied by Italian green beans and a hash brown casserole, plus a no-bake peanut-butter-and-chocolate cookie (99 cents). It's exceedingly rare that what we got looked exactly like the photo, in this case on the cafe's Facebook page. Rosie's offers made-by-hand home cooking; recent daily plate-lunch specials have included hard-shell beef tacos, barbecue chicken, a salmon croquette (we're sorry we missed that one) and a chicken tamale casserole; the menu features a range of breakfast items, burgers, sandwiches and salads. The slab of ham in our special was enormous, tender and tasty; the green beans were bias-cut into bite-size pieces that were pleasantly spiced and not at all mushy; the flavorful hash brown casserole was crispy on the top and creamy in the middle. The cookie was bigger than it looked and took us several minutes to nibble into nonexistence.

HOW IT WORKS: Co-owner Katie McDaniel took our phone order and, masked and gloved, brought it out to a table in front of the front door; we paid on the premises. They've set up card tables and plastic chairs on the front lawn if you care to fress al fresco.

HOW IT'S GOING: The place has only been open for a month but word appears to have gotten around; there were several socially distanced customers, some masked, some not, waiting for pick-up orders, and a couple more consuming their lunches on the lawn.

WHAT WE GOT: The Wild Mushroom and Goat Cheese Quesadilla ($12.50), baby portobello, shiitake and oyster mushrooms, sauteed with onions and red and green bell peppers, inside a grilled tortilla with the restaurant's four-cheese blend plus fresh goat cheese, sprinkled with cilantro, and with side cups of sour cream and pico de gallo. Burrito ($11.50), naked burrito ($12.50), taco ($5.75) and nachos ($12.50) are also options.

HOW IT WORKS: Baja Grill started out as a Saline County food truck, then a few years ago opened a an operation in the revolving-door space at Kavanaugh Boulevard and University Avenue. Now they have gone back to their Saline County roots and opened a second outlet in what had been a historic theater in Benton, while remodeling the Heights location to include — ta da! — a back-side drive-thru, which they have been using to good advantage in the couple of weeks since they reopened after several "dark" weeks. We ordered and paid online and got a text message that our order was ready; we figured out how to access the back alley (entrance is through a small parking lot off University Avenue), pulled up to the drive-thru, and the masked-and-gloved server handed us our food through our car window. Bing.

HOW IT'S GOING: Word is still getting out that the restaurant just reopened, but the one in Benton appears to be doing well and is preparing, as evidenced by a hiring notice on the Facebook page, to open its dining room. Stand by.