Tuition would remain flat for most students within the University of Arkansas System this fall under a proposal from system chancellors that advanced through a committee Wednesday.

The board of trustees' Academic and Student Affairs Committee approved largely flat proposals from chancellors Wednesday after being asked earlier this spring by the full board to do so.

The resolution that was approved Wednesday, which must be accepted by the full board today, permits trustees to revisit tuition and fee rates again in the fall, for the spring semester, "should the economic condition necessitate such action."

The flat charges are intended to bring some semblance of relief to students and their families who may be experiencing contracting finances because of the coronavirus pandemic's impact on the economy, such as record unemployment.

Colleges are scrambling to capture students this fall, as surveys nationwide indicate significant hesitation among high school seniors as to whether they will attend college as intended.

The University of Arkansas System is the first among the state's six systems or public universities to set tuition and fee rates for the fall. Some boards of trustees have delayed their spring meetings, in part to give administrators more time to project what their financial realities will be in the fall.

However, leadership at other schools, including the Arkansas State University System, has directed chancellors to keep their tuition and fee rates flat in the fall.

The UA System committee's five members approved the measures on a voice vote without opposition.

The dozens of pages of rates include some fee increases and decreases for certain academic programs at some institutions and new room and board rates for the University of Arkansas Community College at Rich Mountain, which will have dormitories for the first time this fall.

The only tuition rate increases would be at the University of Arkansas for Medical Sciences, which has been hit hard financially by the costs of addressing covid-19 and is staring down a $46 million deficit for next year because of increased costs.

Additionally, the school's Certified Registered Nursing Anesthetists students would pay tuition for the first time. They would pay a per-semester tuition of $22,002 if they are in-state students, and $33,000 if they are out-of-state students. That also would come with a new $1,000 enrollment deposit and a $275 liability insurance fee paid during the fall semester.

Those programs have a high earning potential, System President Donald Bobbitt told trustees. They can earn well into six-figure salaries.

Bobbitt said he didn't want to "go outside the wishes of the board" when proposing tuition and fee rates for the upcoming year.

"UAMS was a special case," he said.

The college needs to be able to charge tuition at higher rates, he said.

"So little of their overall education is covered by the appropriation they get from the state," he said.

On average, UAMS has a lower tuition rate for in-state students than other regional medical schools, officials said.

Bobbitt estimated that's about $16,500 for in-state students, compared with $20,000 to $25,000 at other regional public medical schools. But a lack of scholarships makes it critical that UAMS stays lower than the average in tuition costs, he and UAMS leaders said.

"This is an accreditation issue for us," said Stephanie Gardner, provost and chief academic officer at UAMS.

The school hasn't been cited, she said, but has been encouraged by its accrediting agency to keep its tuition below the median rate because of the combination of fewer scholarships and the high amount of college debt students entering UAMS already have.

"The hope is that through philanthropy we can rectify that and encourage our physicians to go into practice in the state of Arkansas," Bobbitt said.

UAMS already has a "remarkable" track record of keeping graduates in state, he said. Data from 2016 showed that 58.5% of active physicians who attended medical school in Arkansas were practicing in the state. Additional data, however, has shown a decline in residencies that UAMS students have matched to in-state.

Trustee Stephen Broughton, who is a psychiatrist in Pine Bluff, noted that "the cost of a medical education has just skyrocketed" over the years. Yet the need for medical professionals remains, he said.

"The fact that Arkansas doesn't really extend that debt significantly is just amazing," he said. "It's the best education that you can get for the price." 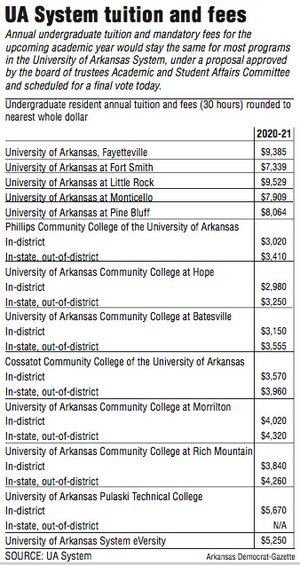 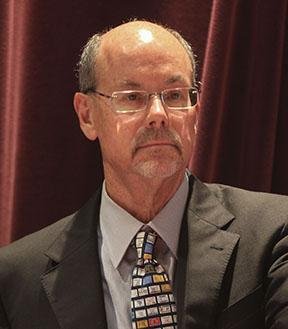