An employee at Fortina restaurant in Stamford, Conn., disinfects a table Wednesday as the state began allowing outdoor dining in its first phase of reopening. More photos at arkansasonline.com/521reopen/. (AP/Mary Altaffer)

NEW YORK -- U.S. health officials have quietly released more reopening guidance that was created more than a month ago but initially shelved.

In more news on Wednesday, President Donald Trump said he's considering holding a meeting in the U.S. with the leaders of the world's major economies, and Apple and Google debuted software the two tech giants call an "exposure notification" tool. State and federal governments can use the new technology to create contact-tracing apps.

As with other recently released guidance, religious organizations were not included in the latest release of CDC guidelines.

The document, which expands on several tools the agency released last week to guide specific types of organizations, was posted on the CDC website over the weekend without fanfare. The guidelines are similar to ones included in the draft, though they pertain to fewer types of businesses and are less restrictive.

The final 20 pages, released as an appendix to the document previously posted on its website, lay out stages of reopening for child care programs, schools and day camps; companies with high-risk workers; restaurants and bars; and mass transit. The document gives detailed suggestions for social distancing, hygienic practices and symptom-checking.

For example, the CDC suggests restaurants might transition from takeout-only to reopening dining rooms with customers spaced 6 feet apart.

The pages flesh out six one-page "decision tool" documents -- posted by the CDC last week -- that use traffic signs and other graphics to tell organizations what they should consider before reopening. But it's not a mandate and leaves lots of wiggle room. The phrases "as feasible," "if feasible," and "where feasible" repeat over and over.

More than a month ago, the CDC gave White House officials a more detailed version of decision tools and additional pages of guidance.

Those early versions of the documents included detailed information for churches that sought to restart in-person services, with suggestions including maintaining distance among parishioners and limiting the size of gatherings.

The White House initially shelved all the guidance, though news organizations obtained copies. Since then, the White House authorized release of some of the information. But the faith-related guidance was taken out after the White House raised concerns about the recommended restrictions.

On Wednesday, White House spokeswoman Kayleigh McEnany said there was no need for a splashy announcement about the guidance being posted because much of the information "was already out there." She said initial draft guidance received "constructive criticism" and refinement during an internal government review before it was released.

Most states have begun reopening. The White House coronavirus task force on April 16 issued broad guidelines for reopening the country but largely left the specifics to states on how to restart economic and social activities.

Trump said he's considering hosting a meeting with world leaders because it would be a "great sign to all" of things returning to normal.

The announcement of a possible summit was the latest effort by Trump to signal to the nation that the U.S. economy is humming again after monthslong shutdowns are beginning to be lifted across the country.

Trump had originally scheduled the Group of Seven summit for June 10-12 at Camp David, the presidential retreat in Maryland. But in March, he announced that he was canceling the annual meeting because of the pandemic and that the leaders would confer by videoconference instead.

"Now that our Country is 'Transitioning back to Greatness', I am considering rescheduling the G-7, on the same or similar date, in Washington, D.C., at the legendary Camp David," Trump tweeted. "The other members are also beginning their COMEBACK. It would be a great sign to all - normalization!"

The subject was discussed on a call Wednesday morning between Trump and French President Emmanuel Macron, a senior White House official said, speaking on the condition of anonymity to discuss internal deliberations.

McEnany was asked whether it would be appropriate to hold the G-7 while ordinary citizens cannot travel to the U.S. from Europe.

"America is reopening. The world is reopening and what a show of strength and optimism to have all the leaders of these countries come together at the White House and pursue business as usual as we move forward through this pandemic," McEnany said.

If the summit happens, the U.S. would request that delegations be pared back to minimum personnel and would curtail nonessential events like the spousal program.

Macron's office said in a statement that "given the importance of the G7 in the response to the crisis, the President is willing to go to Camp David, if the health conditions allow it."

"Whatever form the G-7 meeting takes, whether it's a videoconference or otherwise, I will definitely fight for multilateralism, that's very clear, both in the G-7 and the G-20," said German Chancellor Angela Merkel.

Canadian Prime Minister Justin Trudeau called it an interesting idea, but said leaders need a lot more details. He said it's important G-7 leaders meet in June so they can discuss the pandemic and restoring economic activity.

The G-7 news was announced as Trump was set to hold a meeting with the governor of Kansas and Arkansas' Gov. Asa Hutchinson to discuss safe reopening plans.

Meanwhile, as the U.S. and other countries loosen their coronavirus restrictions, it's back to business, but not business as usual.

In Italy, where good food is an essential part of life, once-packed restaurants and cafes are facing a huge financial hit as they reopen with strict social-distancing rules after a 10-week shutdown.

Experts warned that as many as one-third of the country's restaurants and bars could go out of business, up to 300,000 jobs in the sector could vanish and losses could reach $32 billion this year.

"We have to turn upside down all the activity that we did before," lamented chef Raffaele di Cristo, who must wear a mask and latex gloves as he prepares food at the popular Corsi Trattoria in Rome. "Everything is changed."

In Connecticut, restaurants that reopened Wednesday for outdoor dining are required to rearrange workstations so that employees don't face one another, and stagger shifts and break times to minimize contact among them. Markers must be installed to encourage customers to keep their distance from one another.

In Fredericksburg, Va., one restaurant that recently reopened its patio has taken an extra step to reassure diners. The Colonial Tavern is taking staff members' temperatures at the start of their shifts and posting the results for customers to see.

About 5 million people worldwide have been confirmed infected, and more than 327,000 deaths have been recorded, including more than 93,000 in the U.S. and around 165,000 in Europe, according to a tally kept by Johns Hopkins University, based on government data. Experts believe the true toll is significantly higher.

With the virus far from vanquished, the reopenings could prove to be a stop-and-start, two-steps-forward-one-step-back process.

Ford temporarily halted production at two of its assembly plants Tuesday and Wednesday in Chicago and Dearborn, Mich., after three autoworkers tested positive for the virus. Work was stopped to sanitize equipment and isolate those who were in contact with the infected employees.

Education, too, is facing changes.

Cambridge became the first university in Britain to cancel all face-to-face lectures for the new school year, saying they will be held virtually and streamed online until the summer of 2021.

The University of Notre Dame in Indiana will return students to campus but redesigned its calendar to start the semester early in August and end before Thanksgiving.

In South Korea, hundreds of thousands of high school seniors had their temperatures checked and used hand sanitizer as they returned Wednesday, many for the first time since late last year. Students and teachers were required to wear masks, and some schools installed plastic partitions around desks.

France is limiting spaces in its primary schools, giving priority to the children of essential workers and those in need. Some younger students even go on alternating days, while high schools remain closed.

In other news, Apple and Google's software launch Wednesday will allow public-health authorities around the world to create mobile applications that notify people when they may have come in contact with someone who's been diagnosed with the coronavirus, the two companies said.

The effort utilizes bluetooth radios within smartphones and will be part of a new software update the companies were pushing out Wednesday.

State and federal governments can use it to create contact-tracing apps that people can download using Apple's App Store or the Google Play store. People who have updated their phones with the latest software will be able to share their bluetooth signal, logging when the radio recognizes other people who have downloaded an app that uses the software.

Apple and Google said some U.S. states and 22 countries would be using the software, but the companies declined to provide a list of all the government agencies using it.

The software has come under criticism recently because some public-health authorities say it doesn't provide the data necessary for them to improve their own contact-tracing efforts, which is being conducted by armies of people conducting interviews with coronavirus patients.

The purpose of contact-tracing interviews is to help health authorities trace the spread of the virus so that they can take actions to slow it.

Some health officials had asked Apple to remove some of those restrictions, but Apple declined, citing privacy and battery-life issues.

As an alternative, Apple and Google created their own software, which removed some of the barriers public-health authorities had wanted to remove, but placed new restrictions, limiting how authorities could use the data. For instance, a coronavirus patient being interviewed cannot provide a list of people they may have contacted by bluetooth.

Apple customers with phones older than the iPhone 6s, released in September 2015, won't be eligible to use the exposure notification software because out-of-date phones can't receive the latest updates.

Android users have comparatively low rates of adoption when it comes to updates, in part because there are many different versions of Android, known as "forks," that come installed on handsets. 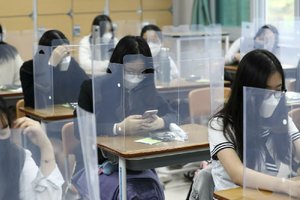 Seniors wait behind shielding for class to begin Wednesday at a high school in Daejeon, South Korea. (AP/Yohnap/Kim Jun-beom)