Funds for Michigan, Nevada targeted by Compiled by Democrat-Gazette staff from wire reports | May 21, 2020 at 6:59 a.m. 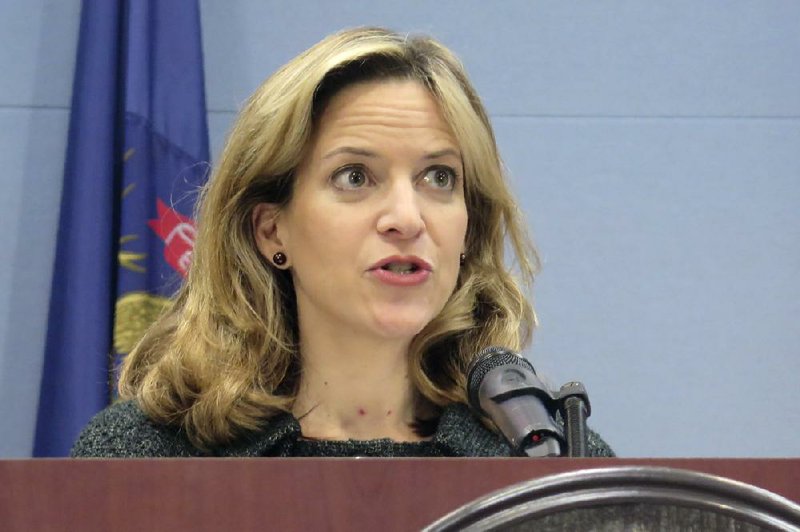 Michigan’s Democratic Secretary of State Jocelyn Benson, shown March 5, noted Wednesday that GOP colleagues in Iowa, Georgia, Nebraska and West Virginia had mailed out applications for absentee ballots to all voters in their states. (AP/David Eggert)

WASHINGTON -- President Donald Trump threatened Wednesday to hold up coronavirus relief money for Michigan after he said that the state had sent absentee ballots to millions of voters.

Michigan mailed applications for the absentee ballots, not the ballots themselves.

"Michigan sends absentee ballots to 7.7 million people ahead of Primaries and the General Election," Trump tweeted Wednesday. "This was done illegally and without authorization by a rogue Secretary of State. I will ask to hold up funding to Michigan if they want to go down this Voter Fraud path!"

Trump later made a similar threat against Nevada, which has sent ballots to voters for its June 9 state primary because of the coronavirus pandemic. The upcoming election has no bearing on the presidential race because Nevada held its Democratic presidential caucus in February, and it canceled its Republican presidential caucus.

A federal judge recently cleared Nevada's decision to mail ballots, which were sent by the Republican secretary of state.

"State of Nevada 'thinks' that they can send out illegal vote by mail ballots, creating a great Voter Fraud scenario for the State and the U.S. They can't! If they do, 'I think' I can hold up funds to the State. Sorry, but you must not cheat in elections," Trump tweeted.

It was not immediately clear how Trump could delay the funds, which come from coronavirus relief spending measures he signed into law. Trump tagged his acting budget director, his chief of staff and the Treasury Department on the tweets.

Trump has expressed his opposition to voting by mail, claiming the practice is ripe for fraud. Trump himself requested a mail ballot for Florida's GOP primary last month, and he has voted absentee in previous elections.

[Video not showing up above? Click here to watch » https://www.youtube.com/watch?v=dzavREyPyAo]

On Monday, Republican National Committee Chairwoman Ronna McDaniel said the party had no problem with a system like the one Michigan proposed.

Republicans have pushed back against Democratic plans to send ballots to all voters, as Nevada's Republican secretary of state is doing for her state's primary.

Michigan spent $4.5 million in federal funds to mail absentee ballot applications to all 7.7 million registered voters for the August primary and November general election. Michigan is a crucial presidential battleground state that Trump narrowly won in 2016.

Michigan is among states hardest hit by the coronavirus pandemic, and Trump and the state's Democratic governor, Gretchen Whitmer, have clashed over federal assistance during the crisis.

Michigan's secretary of state, Jocelyn Benson, a Democrat, announced the mailing Tuesday as part of the state's efforts to confront voters' concerns about the pandemic. Benson said the money came from $11.2 million it received from the federal government for elections.

Benson tweeted to Trump that her Republican counterparts in several states also had mailed ballot applications.

'Hi! I also have a name, it's Jocelyn Benson. And we sent applications, not ballots. Just like my GOP colleagues in Iowa, Georgia, Nebraska and West Virginia,'" she tweeted.

Normally in Michigan, it is up to voters to ask the clerks for for absentee ballots.

The March presidential primary was the first major election in Michigan in which people could vote absentee without needing an excuse after the approval of a 2018 ballot initiative.

Meanwhile, in Texas, a federal appeals court has once again put on hold an expansion of mail voting during the coronavirus.

The decision by a three-judge panel of the U.S. 5th Circuit Court of Appeals in New Orleans was made just one day after a federal judge in San Antonio ordered on Tuesday that all Texas voters who feared contracting the coronavirus could apply to vote by mail.

The temporary hold on that order is a victory for Attorney General Ken Paxton who said U.S. District Judge Fred Biery had ignored evidence and disregarded well-established laws in his decision Tuesday to expand mail voting.

The appeals court's action is an administrative stay that is in place while the court considers whether to block Biery's ruling while it hears Paxton's appeal.

The Texas Democratic Party and the voting rights groups which filed the suit to expand mail voting have until today at 3 p.m. to present their argument to the court on why Biery's order should remain in place while the appeals court hears the case.

"I applaud the Fifth Circuit for issuing this temporary stay while the case proceeds. Protecting the integrity of elections is one of my top priorities, and allowing universal mail-in ballots would only lead to greater fraud and disenfranchise lawful voters," Paxton said in a statement. "Law established by the Legislature must be followed consistently, including carefully limiting who may and may not vote by mail."

Requirements that include notarized ballots and a photo identification create barriers to voters, Andrews said in a statement.

"Oklahomans deserve to make their voices heard safely without further barriers to the voting process as we continue to deal with a worldwide pandemic," Andrews said. "The additional barriers to the mail-in voting process do nothing more than further suppress the votes of marginalized groups and put citizens in harm's way under the false claims of reducing voter fraud."

The lawsuit against the state Election Board and Election Board Secretary Paul Ziriax was filed after a bill signed into law earlier this month imposed the restrictions on absentee ballots.

A spokesperson for Ziriax did not immediately return phone calls for comment.

The bill was passed and signed days after the state Supreme Court ruled in a lawsuit by the League of Women Voters and two voters at high risk of contracting the coronavirus that mailed-in absentee ballots do not have to be notarized.

Information for this article was contributed by Darlene Superville, David Eggert, Nicholas Riccardi and Ken Miller of The Associated Press; and by James Barragan of The Dallas Morning News.