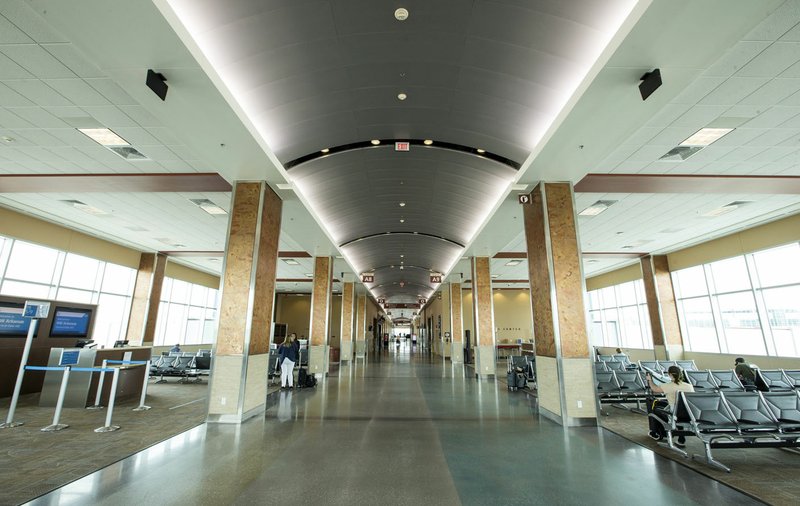 Passengers wait for a departing flight Wednesday, May 13, 2020, in a mostly empty concourse at Northwest Arkansas National Airport in Highfill. Go to nwaonline.com/200517Daily/ to see more photos. (NWA Democrat-Gazette/Ben Goff)

HIGHFILL -- Airport officials were looking Wednesday at financial scenarios showing revenue could be off 60% to 70% compared to last year, but said they are in a better position than most airports around the country to weather the effects of the coronavirus pandemic.

Passengers at Northwest Arkansas National Airport were down 95% in April. That's a problem because most of the airport's revenue is tied directly to the number of people flying. Officials budgeted for $21.9 million in income this year from airlines, car rentals, parking, fuel taxes, terminal rentals and other sources.

They're trying to keep the airport's 2020 shortfall at $2 million to $3 million with a combination of decreasing operating expenses, deferring capital projects and using federal grant money.

XNA received a grant from the Federal Aviation Administration as part of the Coronavirus Aid, Relief, and Economic Security Act. The airport plans to use the money for operations, including payroll, utilities, maintenance and debt service.

"The good news is we have an $8.2 million grant and when you add that back into the equation we'd be down 2 to 3 million dollars," Tim O'Donnell, chief financial officer, told Finance Committee members. "The big takeaways are the CARES grant and the reduction in capital expenditures are helping to significantly offset the significant shortfall in our revenues."

O'Donnell said planned capital expenditures are being pushed back where possible, not eliminated. About $8 million in anticipated construction to renovate the terminal and add a new concourse and several smaller projects won't happen this year, he said.

"It's just shifting timing, it's not like it's going away forever," O'Donnell said. "Essentially, we've taken several million dollars out of the original budget from a capital perspective."

Aaron Burkes, chief executive officer, said most experts are predicting it could be three to five years before the airline industry gets back to 2019 levels.

"I think we need to think about a worst-case scenario as we plan this," Burkes told board members. "We know we're in better financial shape than most airports so we have the ability to weather this longer than other airports do, again we have about 1,000 days cash on hand right now."

XNA had $29.3 million in unrestricted cash reserve available to start the year, according to Burkes.

To offset the expected financial shortfall, airport officials are cutting costs, according to Kelly Johnson, chief operating officer. That includes cutting back on landscaping and building maintenance and on employees who aren't critical with so little traffic going through the terminal, such as baggage handling, valet service, red caps and parking lot cashiers. They're also not filling some vacant or new positions.

"We're doing everything we can and looking for opportunities not to spend money," Johnson told the group. "Some of the capital projects we have basically suspended."

For example, XNA won't be buying a new fire truck this year or new entrance signs and about $1 million improvements in the maintenance facility won't happen, Johnson said.

Janitorial service was reduced from 18 to four for a while but is being bumped back up to six in anticipation of some increase in travelers, Johnson said.

"We want to make sure that we are extremely visible sanitizing chairs and touch points around the building," Johnson said. "We think it's important to build public confidence."

An added expense is spraying the terminal every night with a high-tech sanitizing process like those used in hospitals, Johnson said. That costs $500 per night but may be brought in-house later in the year if equipment can be procured.

"While we geared down in some areas, we geared up in others," Johnson said.

"It shows that everybody is doing exactly what we're doing," Johnson said. "We're looking at ways to cut expenses, making sure we're meeting the public demand."

O'Donnell added TSA screening numbers have been slowly creeping up, some recent days have seen 200 to 300 passengers go through the airport.

Northwest Arkansas National Airport received a clean audit of the 2019 books, Finance Committee members were told Wednesday. Financial statements for Northwest Arkansas Regional Airport Authority were audited by Hogan Taylor. In addition to the audit of the financial statements of the authority, Hogan Taylor also completed an audit of the Passenger Facility Charges program and an audit of federal funding. A Passenger Facility Charge is a fee that almost all airline travelers in the United States pay in their ticket price. The fee goes toward the upkeep and maintenance of airports.

No audit findings were reported.